Two years in the COVID-19 pandemic, most people are now aware how quickly viruses can pass from person to person and cause widespread illness. But viruses — giant ones — also can be found everywhere in nature. Let’s put it this way, if an organism has a nucleus, it can catch a virus. 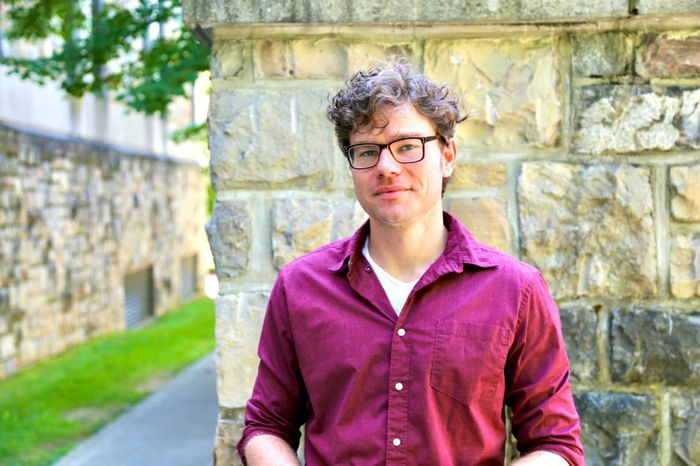 Two years in the COVID-19 pandemic, most people are now aware how quickly viruses can pass from person to person and cause widespread illness. But viruses — giant ones — also can be found everywhere in nature. Let’s put it this way, if an organism has a nucleus, it can catch a virus.

Frank Aylward, an assistant professor in the Department of Biological Sciences, wants to understand how environmental viruses can literally reshape biological ecosystems. Similar to how COVID-19 changed the very way people interacted and lived — remember those eerie 2020 YouTube drone videos of all-but-silent cities, towns, and college campuses? — viruses can change the way organisms interact and exist in nature.

“I started working on giant viruses after I started my position here [in 2017] and it really took off,” Aylward said. “I’ve always been interested in microbial diversity, and I was blown away when I started to realize that giant viruses were found pretty much everywhere — all throughout the ocean, freshwater environments, soil, and various other ecosystems. They infect a wide range of eukaryotic hosts and play important roles in biogeochemical cycles.” (Eukaryote entail any cell or organism that possesses a clearly defined nucleus.)

Aylward will use a five-year, $989,000 National Science Foundation (NSF) CAREER Award to better understand these giant viruses and their effects on ecosystems. For those who follow NSF CAREER Awards, that amount may seem high. It is. But it’s also not too outside the norm. “The award amount is definitely much higher than CAREER awards in engineering or other science domains such as computer science,” said Jean Gao, program director of NSF’s Division of Biological Infrastructure. “However, it is within the range for NSF Biology Directorate where [the] minimum budget is $500,000 due to biological experiment costs.”

Also of note, Aylward is one of four Virginia Tech College of Science faculty members to recently win the coveted CAREER grant, considered one of the most prestigious awards of its kind, supporting creative junior faculty who are expected to become future academic leaders. Sujith Vijayan of the School of Neuroscience, Satoru Emori of the Department of Physics, and Lauren Childs of the Department of Mathematics are among recent awardees.

Aylward is also an affiliate faculty member of the systems biology program, part of the Academy of Integrated Science within the College of Science, a member of the Global Change Center at Virginia Tech, and a member of the Center for Emerging, Zoonotic, and Arthropod-Borne Pathogens. The latter two are part of the Fralin Life Sciences Institute. He researches microbial ecology and diversity, and genomics and metagenomics, including how microbial communities are shaped and function.

Aylward added that he also hopes to understand how viruses can re-shape the evolution of their hosts. “A few years ago, we found that some giant viruses endogenize their genomes into those of their hosts, in effect donating thousands of new genes to their host,” Aylward said. “This can potentially have a profound influence on host evolution.” Think of how people have built up different immunities.

Did the COVID-19 pandemic inspire Aylward to study how diseases can bend and twist ecosystems? Then answers is no, not really. “It is inspired by my fascination with the complex genomes and infection strategies of giant viruses,” he said. “Many giant viruses infect unicellular eukaryotes and are no danger to humans, but some human pathogens such as poxviruses are divergent members of this lineage. So, we may learn more about general strategies that viruses use to manipulate their hosts during infection.”

According to Aylward, viruses are usually considered to be simple and streamlined, but that isn’t always the case. “Giant viruses are often visible under a light microscope and can have genomes that are larger than some bacteria, so they are much more complex than viruses are commonly thought to be,” he added. “I’m hoping this research will provide a more in-depth appreciation for the enormous complexity of some viruses.”

This project also will develop novel bioinformatic tools and resources for the genomic analysis of giant viruses and establish an undergraduate teaching curriculum focused on giant virus discovery, Aylward said. Postdocs and both graduate and undergraduate students will be trained to analyze viral genomes and develop novel bioinformatic resources as part of the study. He also will develop undergraduate-level curricula that will focus on discovering and classifying novel giant viruses.

In 2019, Aylward was awarded a Simons Early Career Investigator in Marine Microbial Ecology and Evolution Award, a three-year, $540,000 grant with the goal of better understanding evolutionary trends in prokaryotes and the roles they play in carbon and nitrogen cycling and other biogeochemical processes vital to the Earth’s climate. He also won a 2018 Alfred P. Sloan Research Fellow in Ocean Science, worth $65,000, to fund personnel in his lab and to purchase a server for computational genomic research.