Microbes to demonstrate biomining of asteroid material aboard space station 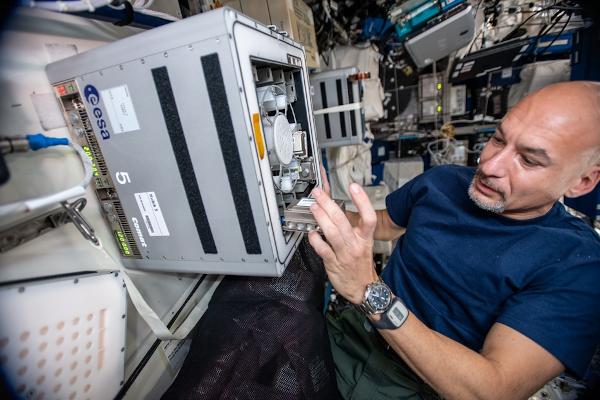 As humanity moves closer to the possibility of living and working millions of miles from Earth on planets like Mars, scientists are looking beyond our planet at how to acquire the materials needed to establish a self-sustaining presence in space.

Researchers are putting mining methods to the test in microgravity to see if asteroids could provide a vast new source of valuable materials and trace elements. The ESA (European Space Agency) BioAsteroid experiment launching aboard the 21st SpaceX cargo resupply mission investigates biomining in microgravity aboard the International Space Station. The study does this by sending experimental devices (bioreactors) to the space station containing asteroid material and observing the capabilities of microbes to extract useful elements from the rocky substrate.

Biomining is an environmentally friendly and energy efficient way of extracting useful elements by using microbes to break down rocks to make soil or provide nutrients. Microbes are tiny organisms such as bacteria and fungi that have a wide variety of functions. Some microbes have abilities that could be beneficial to humans, such as biomining. “Microbes are very good at doing these things, because they’ve been mining elements for three and a half billion years, long before humans came along,” says BioAsteroid Investigator and Professor at the UK Centre for Astrobiology at University of Edinburgh, Charles Cockell.

While biomining has been used on Earth to address problems of pollution such as acid mine drainage, a major question is how these microbes attach to surfaces, or form biofilms, in space. Microgravity can alter basic physical processes like convection and liquids mixing. Cockell has addressed some of these questions as principal investigator of BioRock, which was conducted on the space station in 2019 after its delivery on SpaceX CRS-18. This previous ESA investigation examined how microgravity and Martian gravity affects the microbial processes involved in biomining. Surprising the research team, microgravity did not have a detrimental effect on biomining. The results were published in the scientific journal Nature earlier this year. “The microbes were able to biomine in the same way under different gravity conditions. We successfully demonstrated rare earth element extraction from basalt, a constituent of the lunar and Martian surface,” says Cockell.

Now that BioRock has completed the first technical demonstration of a bioreactor performing biomining on basalt, Cockell has his sights set on extracting elements from asteroids. “The whole point of BioAsteroid is to try and understand how microbes interact with asteroid material in microgravity, and whether they can be used to accelerate, or catalyze, the breakdown of asteroid material to release useful elements,” says Cockell.

BioAsteroid focuses on microbes that have been used in biomining before, but includes a new twist. “Instead of looking at basalt, we are looking at asteroid material. Instead of just bacteria, we are looking at a bacterium and a fungus, and a bacterium and a fungus mixed together,” says Cockell. The fungi used in BioAsteroid are aggressive dissolvers of rock, producing lots of acid and forming networks over rocks with mycelia. By lowering the pH of the environment, the microbes will extract positively charged elements from asteroid material, causing it to break down.

The mostly automated investigation will be active for 19 days, during which the microbes and fungus will interact with pieces of a 4.5 billion-year-old chondrite asteroid found in Morocco. Each of 12 chambers will include about 1 gram of asteroid and 5 milliliters of liquid containing approximately 1-5 billion microbes.

“You have to get stuff out of the crust of a planet to build things, whether it’s iron in your spaceship, or whether it’s rare earth elements in your mobile phones or your computer screens,” says Cockell. “Civilization is built on elements that have been dug out of the crust of the Earth.” These elements have been mined throughout history and used for tools: from metallurgy to the miniaturization of electronic components such as capacitors and magnets. Perhaps in the future, humanity will have space rocks, and of course microbial miners, to thank for space colonies and new technologies.