A study supported by FAPESP and reported in an article published in ISME Journal identified 522 genomes of archaea and bacteria associated with the roots and soil of two plant species native to the Brazilian montane savanna ecoregion known as campos rupestres (“rocky meadows”). Hundreds of microorganisms hitherto unknown to science were identified, showing that the ecoregion is a biodiversity hotspot and that many new organisms have yet to be described and classified in Brazil. 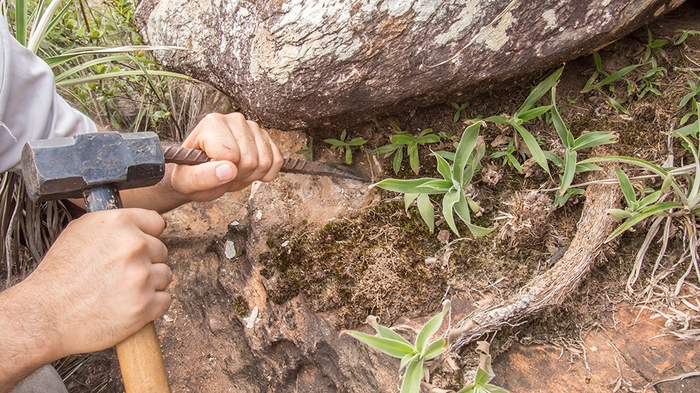 A study supported by FAPESP and reported in an article published in ISME Journal identified 522 genomes of archaea and bacteria associated with the roots and soil of two plant species native to the Brazilian montane savanna ecoregion known as campos rupestres (“rocky meadows”). Hundreds of microorganisms hitherto unknown to science were identified, showing that the ecoregion is a biodiversity hotspot and that many new organisms have yet to be described and classified in Brazil.

The discovery could potentially be a basis for the development of biological substitutes for the chemical fertilizers used by farmers, especially those containing phosphorus.

“Phosphorus is normally present in the soil, but not always in a form that plants can use. Most of the microorganisms we found make phosphorus soluble so that plants can absorb it,” said Antônio Camargo, first author of the article. The study was conducted during his PhD research with a scholarship from FAPESP at the State University of Campinas’s Institute of Biology (IB-UNICAMP) in São Paulo state.

The study was conducted under the aegis of the Genomics for Climate Change Research Center (GCCRC), one of the Engineering Research Centers (ERCs) established by FAPESP, in this case in partnership with the Brazilian Agricultural Research Corporation (EMBRAPA) at UNICAMP.

One of the plants, Vellozia epidendroides, lives in shallow soil, whereas another, Barbacenia macranta, was found growing on exposed rock. Both belong to the family Velloziacea. Specimens were collected in a private area adjacent to the Serra do Cipó National Park in Minas Gerais state.

A comparison of microorganisms associated with plants found growing in soil and on rocks showed that they comprised different communities but shared many species. Several microorganisms were highly specialized in phosphorus transport and conversion to the soluble form of the mineral, which plants can absorb.

“Microbial communities also play an important role in supplying nitrogen, another essential plant nutrient,” said Camargo, currently a researcher at the US Department of Energy’s Joint Genome Institute, where the genomes were sequenced.

“Previous research focused on plants’ mechanisms for adapting to the harsh conditions of this montane savanna and often ignored microorganisms. Our study shows that microorganisms can play a key role in plant adaptation to the extreme conditions of this environment. In particular, they supply the phosphorus need to fuel plant growth,” said Rafael Soares Correa de Souza, one of the corresponding authors of the article. Souza is affiliated with the GCCRC and was supported by FAPESP.

The researchers expect their discoveries to contribute to the creation of products that replace chemical fertilizers based on phosphorus, one of the crop nutrients most widely used by Brazilian farmers. More than half the phosphate fertilizer used in Brazil is imported, mainly from Morrocco but also from Russia, Egypt, China and the United States.

In addition to the dependence on imports, phosphate fertilizer pollutes water bodies, and its production is a source of greenhouse gas emissions, estimated at 1 kg for every kg of fertilizer produced. Moreover, phosphorus is a non-renewable natural resource and hence finite.

Biological fertilizers are already in use in Brazil. In the case of soybeans, they are the main source of nitrogen in 80% of the planted area. A previous study by the GCCRC estimated that the use of biological inoculants instead of nitrogen fertilizers could save USD 10 billion per year (read more at: agencia.fapesp.br/39681).

“The study also underscores the need for conservation of Brazil’s ecosystems, which can supply many other nature-based solutions like this one,” said Souza, a co-founder of biotech startup Symbionics, which develops next-generation biologics.

As noted, campos rupestres are biodiversity hotspots with many exclusive species. They form mosaics totaling some 26,500 square kilometers scattered across Brazil in biomes such as the Cerrado (savanna), Caatinga (semi-arid areas in the Northeast) and Atlantic Rainforest. The main threats to these ecosystems are mining and cattle raising.

The researchers are now conducting studies to test the benefits of some of the microorganisms found in croplands. Experiments are under way at the GCCRC in Campinas.