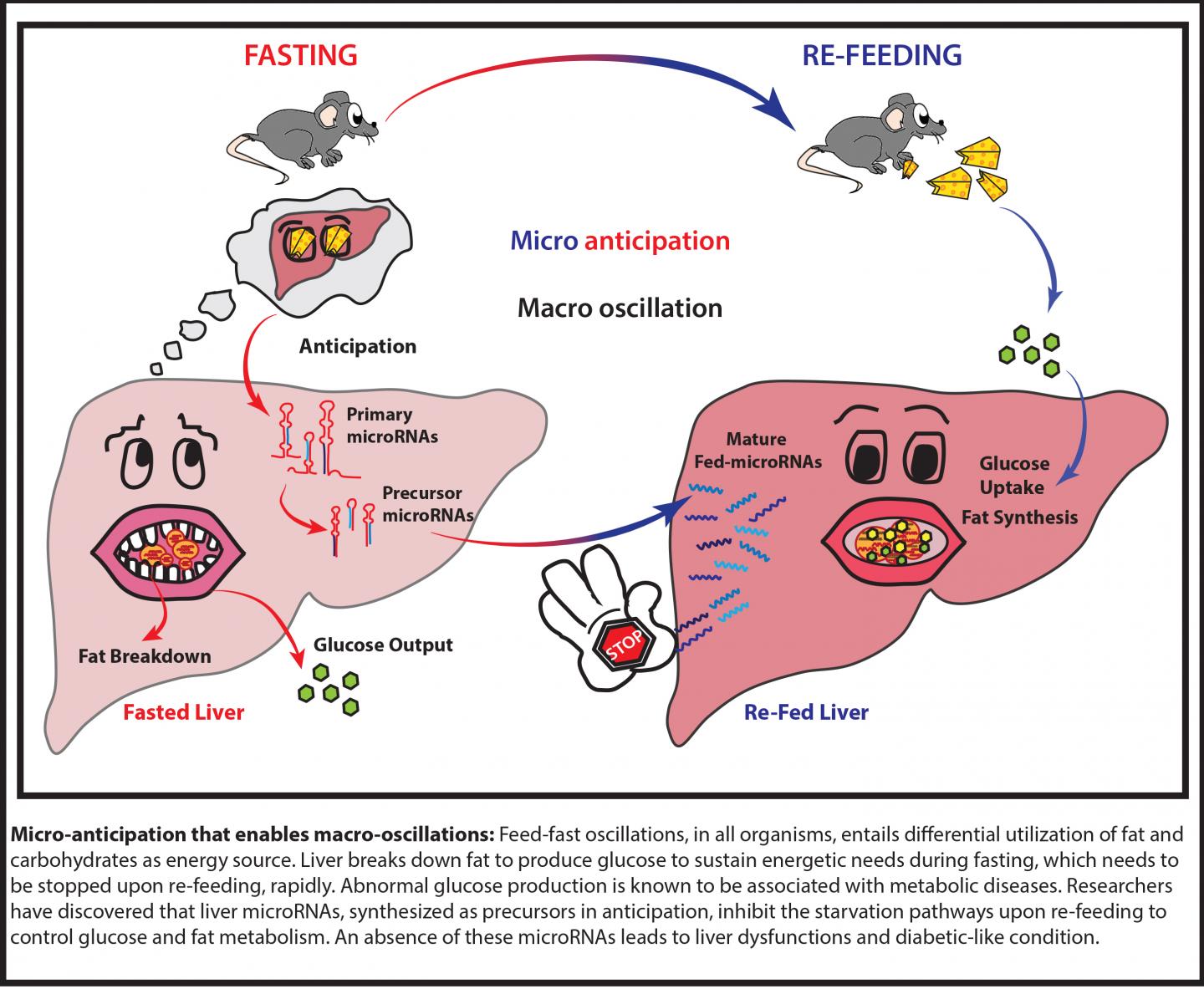 Researchers at TIFR have discovered molecular anticipation of feeding in the liver that is essential to ensure that the body, after fasting, adapts to utilize incoming nutrients upon re-feeding. Their findings, published in the international journal Cell Reports, show that very small RNA molecules called microRNAs control major metabolic pathways by inhibiting synthesis of proteins, and thus contribute to maintenance of blood glucose levels.

Liver is one of the central metabolic organs that plays a pivotal role in maintaining organismal health and lifespan. All living organisms go through feed-fast cycles, where in-general, fats are broken down during fasting to meet the energy demands while glucose or carbohydrates act as major energy source following food consumption. Inflexibility to oscillate between these processes comes from the failure of organs (or organisms) to switch metabolic pathways. Both over- or under-utilization of either fat or glucose is known to affect health of all life forms. In highly evolved species, liver acts as the primary organ to regulate both fat and glucose metabolism and ensure that there is neither over- nor under-utilization of these energy sources. Liver dysfunctions are known to be associated with obesity and diabetes. Abnormal liver metabolism is one of the primary drivers of fatty liver disease, which is highly prevalent, more so among Indians. Thus, molecular mechanisms within liver cells that bring about a global change in gene expression from a fasted to a refed state become critical. There has been a recent surge in the efforts by scientists all over the world to discover molecular factors that respond to food intake (including time of the day feeding) and circadian rhythm (light-dark cycles), specifically in the liver, and affect whole body metabolism.

The key aspect of the research carried out at TIFR is the identification of “fed-microRNAs”–because their levels increase in the liver following feeding–that stop the production of proteins required during fasting. Although, microRNAs have been known to be important for liver functions, the recent discovery shows that a specific group of these small RNAs act together to curb the fasting response, upon re-feeding. Highlight of the study is the discovery that the precursors of these fed-microRNAs are already made when the mice are fasting, creating an anticipatory mechanism. Importantly, perturbing these fed-microRNAs result in molecular and physiological changes with associated increase in blood glucose levels, reminiscent of a pre-diabetic state. This study paves way to utilize these small RNA molecules as potential therapeutic targets to control glucose or fat metabolism and as a plausible intervention to metabolic (liver) diseases.

Researcher gets $552,000 grant to study how dietary fiber can protect against diabetes

Who’s liable? The AV or the human driver?