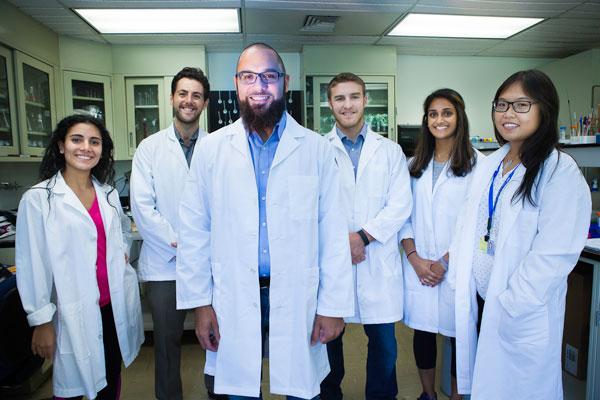 A chance observation in a Southern California fast food restaurant led Luis Martinez, Ph.D., to wonder about the connections behind wound healing problems and methamphetamine use.

Martinez, an associate professor of biomedical sciences at NYIT College of Osteopathic Medicine, was on vacation with his family in 2014 when he saw a man and woman with what he believed to be hallmark indicators of meth use – decayed teeth, needle marks, and furious scratching of open lesions covering their arms. While he was interested in researching methamphetamine and pulmonary infections in mice, and the relationship between meth and bacterial infections, his observation of the couple triggered questions for him about the drug’s effect on the body’s immunological response to wounds.

“I want to investigate the mechanisms by which methamphetamine alters the body’s inflammatory response and how it interferes with wound healing,” he said.

Martinez’s quest for answers has begun in earnest; the National Institutes of Health awarded him a $431,700 three-year grant to investigate, in mice, methamphetamine’s effects on the underlying biological mechanisms that cause inflammation and impair wound healing. Martinez hopes his findings can form the foundation for new studies on human subjects that might lead to targeted prevention and wound management.

Martinez will conduct his research with three NYITCOM students and in collaboration with scientists at Rutgers-The New Jersey Medical School, Albert Einstein College of Medicine, and The George Washington University.

Martinez notes the cost of care associated with wounds in meth users in the United States is nearly $20 million annually, more than half of their meth-related hospital costs. Wounds are difficult to manage, he said, because of the persistence of bacteria, drug-related immune deficiency, and behaviors by users, including constant scratching related to the sensation of crawling skin caused by drug.

“If we could effectively treat wounds in drug users while minimizing the cost for the health care system, it would be great,” said Martinez. “And it’s possible the findings could be applied to other chronic infections in the future.”

As part of the study, Martinez and his research team will study the impact of meth on white blood cells, known as leukocytes, including neutrophils and macrophages, both of which play a key role in wound healing. Using images of cells in wounds from mice that have been injected with meth, the researchers also will study the drug’s effect on the production of a specific protein called IL-6. Those results will be compared with mice who have not received the drug and others who have been injected with combinations of other substances. Part of the research also involves comparison of results between male and female animals.

“Our preliminary studies show that meth causes an overproduction of IL-6, which delays the body’s inflammatory response and ability to heal,” he said. “At the same time, we believe meth causes an uncontrolled process by which neutrophils migrate to a wound and their natural ability to clear bacteria and cellular debris is compromised while producing damaging substances against the mammalian tissue. We’ll be able to collect images that trace the activities of cells in a wound and find out what each area in the immune response is doing in keeping the wound open.”

Another aim of the study is to discover what might counteract some of the wound-healing problems. One possible answer is the use of antibodies that work against the IL-6 overproduction.

Martinez’s previous studies on methamphetamine and infections were published in the Journal of Infectious Diseases and mBio. But the man and woman he saw a few years ago sparked a new set of questions as well as a deeper reflection on the toll of abuse.

“It was the first time I thought of focusing on the wounds,” said Martinez, adding that he was also struck by the human impact, noting the couple’s affection for each other and how they interacted and walked together. “It was really touching.”

Referring to his focus on meth, microbiology, and immunology, Martinez added: “I was following the trends and found it an interesting topic to get into. Nobody was studying meth and the immune system.”

New York Institute of Technology (NYIT) offers 90 degree programs, including undergraduate, graduate, and professional degrees, in more than 50 fields of study, including architecture and design; arts and sciences; education; engineering and computing sciences; health professions; management; and osteopathic medicine. A non-profit independent, private institution of higher education, NYIT has 12,000 students attending campuses on Long Island and Manhattan, online, and at its global campuses.

Led by President Edward Guiliano, NYIT is guided by its mission to provide career-oriented professional education, offer access to opportunity to all qualified students, and support applications-oriented research that benefits the larger world. To date, 100,000 graduates have received degrees from NYIT. For more information, visit nyit.edu.