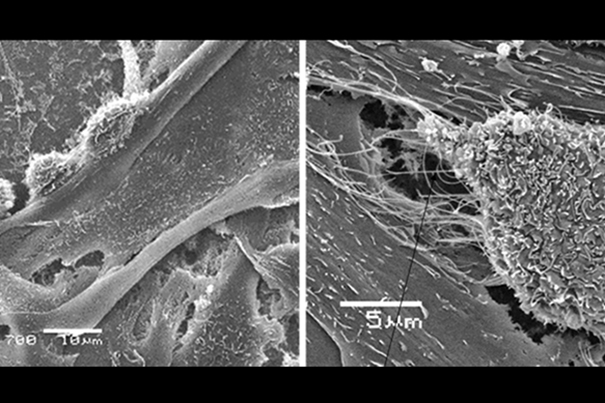 Metastasis — the spread of cancer from one part of the body to others — accounts for more than 90 percent of cancer-related deaths. Although the cells that seed metastasis and the sites they tend to travel to have been increasingly studied over the years, little has been known about how cancer migrates from a primary site, such as breast tissue, to a secondary site, such as the brain or bone marrow.

A study by researchers from Harvard-affiliated Brigham and Women’s Hospital (BWH), published in Nature Communications, offers a new view of how cancer cells extend their reach, co-opting and transforming normal cells through “metastatic hijacking.” The researchers also find that in preclinical models, pharmacological intervention can stop the hijack before it starts, pointing to new therapeutic targets for preventing cancer cells from spreading.

“Metastasis remains a final frontier in the search for a cure for cancer,” said Shiladitya Sengupta of BWH’s Bioengineering Division in the Department of Medicine and corresponding author of the study. “For the past five years we have studied how cancer travels to other parts of the body, and what we find is that communication is key.”

“By working together, our labs have been able to gain greater insights into cell-cell communication in tumor states, which will shed new light on cancer as a disease and the promise and potential of emerging innovative therapies,” said Elazer Edelman of BWH’s Cardiovascular Division in the Department of Medicine.

Sengupta, Edelman, and colleagues began with a simple experiment. In the lab, they constructed a 3-D tumor matrix, complete with endothelial cells, and added metastatic breast cancer cells. They observed that instead of adhering together to form a sphere, the metastatic breast cancer cells spread out along the model’s blood vessels. Using a scanning electron microscope, the researchers detected long, thin tubes extending outward from the cells — nanoscale bridges that connected the cancer cells to normal tissue. The researchers found that the molecular profiles of some of the normal endothelial cells had been changed, and hypothesized that microRNAs were being transferred over the bridges into the endothelial cells. Upon closer examination, they found that the transformed endothelial cells now harbored two microRNAs that previously had been implicated in metastasis.

The researchers then used chemical compounds to prevent the nanoscale bridges from forming, disrupting communication between the tumor cells and endothelium. They did so in the laboratory-constructed model and also in a mouse model, finding that pharmacological agents, including docetaxel, which is used to treat metastatic breast cancer, decreased the number of nanoscale bridges the cells formed. In mice pretreated with the pharmacological agents, the researchers observed a significant decrease in metastatic tumor burden.

In future studies, the researchers will look to see if ATPase inhibitors — drugs that have been studied for treating HIV-AIDS — may also be able to inhibit metastasis by preventing the bridges from forming.

“Our study opens up new avenues for exploration and suggests that these nanoscale membrane bridges may represent new therapeutics in managing metastatic breast cancer,” said Sengupta, who is an assistant professor of medicine at Harvard Medical School. “We plan to continue searching for and evaluating treatments that take aim at these conduits.”