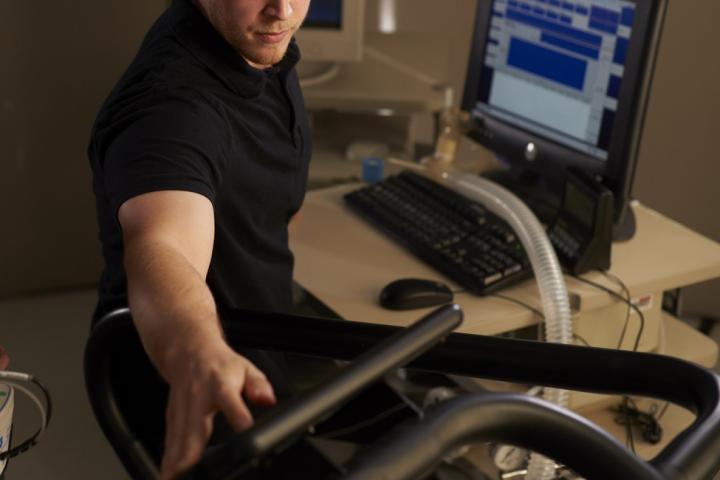 Increasing evidence shows that physical activity and exercise training may delay or prevent the onset of Alzheimer’s disease (AD). In aging humans, aerobic exercise training increases gray and white matter volume, enhances blood flow, and improves memory function. The ability to measure the effects of exercise on systemic biomarkers associated with risk for AD and relating them to key metabolomic alterations may further prevention, monitoring, and treatment efforts. However, systemic biomarkers that can measure exercise effects on brain function and that link to relevant metabolic responses are lacking.

To address this issue, Henriette van Praag, Ph.D., from Florida Atlantic University’s Schmidt College of Medicine and Brain Institute and Ozioma Okonkwo, Ph.D., Wisconsin Alzheimer’s Disease Research Center and Department of Medicine at the University of Wisconsin-Madison and their collaborators, tested the hypotheses that three specific biomarkers, which are implicated in learning and memory, would increase in older adults following exercise training and correlate with cognition and metabolomics markers of brain health. They examined myokine Cathepsin B (CTSB), brain derived neurotrophic factor (BDNF), and klotho, as well as metabolomics, which have become increasingly utilized to understand biochemical pathways that may be affected by AD.

Researchers performed a metabolomics analysis in blood samples of 23 asymptomatic late middle-aged adults, with familial and genetic risk for AD (mean age 65 years old, 50 percent female) who participated in the “aeRobic Exercise And Cognitive Health (REACH) Pilot Study” (NCT02384993) at the University of Wisconsin. The participants were divided into two groups: usual physical activity (UPA) and enhanced physical activity (EPA). The EPA group underwent 26 weeks of supervised treadmill training. Blood samples for both groups were taken at baseline and after 26 weeks.

Results of the study, published in the journal Frontiers in Endocrinology, showed that plasma CTSB levels were increased following this 26-week structured aerobic exercise training in older adults at risk for AD. Verbal learning and memory correlated positively with change in CTSB but was not related to BDNF or klotho. The present correlation between CTSB and verbal learning and memory suggests that CTSB may be useful as a marker for cognitive changes relevant to hippocampal function after exercise in a population at risk for dementia.

Plasma BDNF levels decreased in conjunction with metabolomic changes, including reductions in ceramides, sphingo- and phospholipids, as well as changes in gut microbiome metabolites and redox homeostasis. Indeed, multiple lipid metabolites relevant to AD were modified by exercise in a manner that may be neuroprotective. Serum klotho was unchanged but was associated with cardiorespiratory fitness.

“Our findings position CTSB, BDNF, and klotho as exercise biomarkers for evaluating the effect of lifestyle interventions on brain function,” said van Praag, corresponding author, an associate professor of biomedical science, FAU’s Schmidt College of Medicine, and a member of the FAU Brain Institute and the FAU Institute for Human Health & Disease Intervention (I-HEALTH). “Human studies often utilize expensive and low throughput brain imaging analyses that are not practical for large population-wide studies. Systemic biomarkers that can measure the effect of exercise interventions on Alzheimer’s-related outcomes quickly and at low-cost could be used to inform disease progression and to develop novel therapeutic targets.”

CTSB, a lysosomal enzyme, is secreted from muscle into circulation after exercise and is associated with memory function and adult hippocampal neurogenesis. Older adults with cognitive impairment have lower serum and brain CTSB levels. BDNF is a protein that is upregulated in the rodent hippocampus and cortex by running and is important for adult neurogenesis, synaptic plasticity, and memory function. Klotho is a circulating protein that can enhance cognition and synaptic function and is associated with resilience to neurodegenerative disease, possibly by supporting brain structures responsible for memory and learning.

“The positive association between CTSB and cognition, and the substantial modulation of lipid metabolites implicated in dementia, support the beneficial effects of exercise training on brain function and brain health in asymptomatic individuals at risk for Alzheimer’s disease,” said van Praag.

This work was supported by grants from the Alzheimer’s Association (NIRGD-305257), the Extendicare Foundation, and the National Institutes of Health (K23 AG045957, R01AG027161, P50 AG033514, and UL1RR025011). This work also was supported in part by the NIA Intramural Research Program, the FAU Brain Institute, Jupiter Life Sciences Initiative, and the Florida Department of Health’s Ed and Ethel Moore Alzheimer’s Disease Research program.

About the Charles E. Schmidt College of Medicine:

FAU’s Charles E. Schmidt College of Medicine is one of approximately 157 accredited medical schools in the U.S. The college was launched in 2010, when the Florida Board of Governors made a landmark decision authorizing FAU to award the M.D. degree. After receiving approval from the Florida legislature and the governor, it became the 134th allopathic medical school in North America. With more than 70 full and part-time faculty and more than 1,300 affiliate faculty, the college matriculates 64 medical students each year and has been nationally recognized for its innovative curriculum. To further FAU’s commitment to increase much needed medical residency positions in Palm Beach County and to ensure that the region will continue to have an adequate and well-trained physician workforce, the FAU Charles E. Schmidt College of Medicine Consortium for Graduate Medical Education (GME) was formed in fall 2011 with five leading hospitals in Palm Beach County. The Consortium currently has five Accreditation Council for Graduate Medical Education (ACGME) accredited residencies including internal medicine, surgery, emergency medicine, psychiatry, and neurology.

About the FAU Brain Institute:

Inaugurated in 2016 on the John D. MacArthur Campus in Jupiter, Fla., the FAU Brain Institute, supports research, education and community outreach among more than 100 faculty level researchers at FAU and its affiliate research centers. One of FAU’s four pillars that guide the University’s goals and strategic actions, the Institute seeks to unlock the secrets of brain development, function and plasticity and how the mechanisms uncovered can be compromised to drive devastating brain disorders. From the study of neuronal development and signaling to investigations of brain diseases including addiction, autism, Parkinson’s and Alzheimer’s disease, researchers from FAU’s Brain Institute seek to generate knowledge that benefits society. For more information about the Institute and its members, visit http://www.ibrain.fau.edu.

Florida Atlantic University, established in 1961, officially opened its doors in 1964 as the fifth public university in Florida. Today, the University serves more than 30,000 undergraduate and graduate students across six campuses located along the southeast Florida coast. In recent years, the University has doubled its research expenditures and outpaced its peers in student achievement rates. Through the coexistence of access and excellence, FAU embodies an innovative model where traditional achievement gaps vanish. FAU is designated a Hispanic-serving institution, ranked as a top public university by U.S. News & World Report and a High Research Activity institution by the Carnegie Foundation for the Advancement of Teaching. For more information, visit http://www.fau.edu.