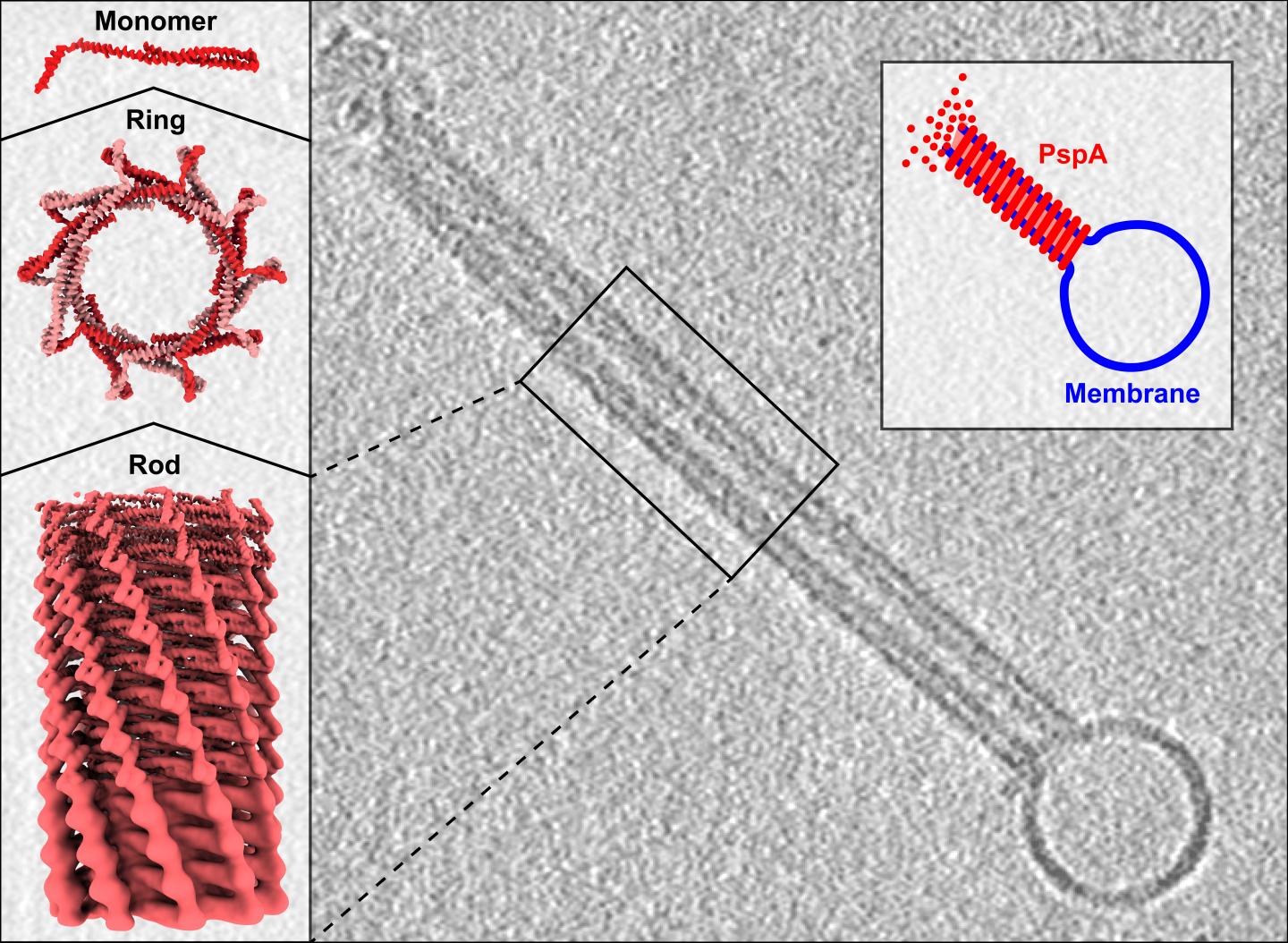 The cells of simple organisms, such as bacteria, as well as human cells are surrounded by a membrane, which fulfills various tasks including protecting the cell from stress. In a joint project, teams from Johannes Gutenberg University Mainz (JGU) and Forschungszentrum Jülich, with participation of Heinrich Heine University Düsseldorf (HHU), have now discovered that a membrane protein found in bacteria has a similar structure and function as a group of proteins that are responsible for remodeling and rebuilding the cell membrane in humans. No connection between the two protein groups was known before. The team’s research work has been published recently in the renowned journal Cell.

The phage shock protein (Psp) system was discovered in bacteria approximately 30 years ago. At the time, it was identified to be a response of Escherichia coli bacteria to infection with special viruses called bacteriophages. Later it became clear that its function in protecting the cell membrane exceeds the specific response to bacteriophage infection. Osmotic stress, heat, cell toxins, or defects in the membrane envelope can also trigger the stress reaction.

“Today, we know that the Psp system is activated in response to numerous types of membrane stress. However, several molecular details still remain puzzling,” explained Professor Dirk Schneider, head of the Membrane Proteins group at JGU. “That’s why we decided to take a closer look at core proteins of the Psp system.” Together with his team, he has recently discovered how the Psp representative IM30 forms a protective carpet-like structure on a cell membrane in order to cope with membrane stress.

In their new work, the scientists scrutinized the phage shock protein A (PspA), which has a key role in the Psp system. Specifically, by using cryo-electron microscopy, it became visible how PspA forms long, spiral-shaped tubes that can enclose a biomembrane in the inner cavity. The high-resolution images now show for the very first time how PspA dissolves individual membranes locally and then reshapes them into larger units or even mediates the formation of new membrane structures.

“Thousands of PspA building blocks can be assembled to form large helical structures. Therefore, they are an ideal research object for our cryo-electron microscopic structural analysis,” said Professor Carsten Sachse from Forschungszentrum Jülich and HHU Düsseldorf. The studies were performed at Jülich together with Dr. Benedikt Junglas, a former doctoral student of Professor Dirk Schneider at JGU. At the Ernst Ruska-Centre for Microscopy and Spectroscopy with Electrons (ER-C), Forschungszentrum Jülich operates some of the most powerful electron microscopes in Europe and, as of recently, cryo-microscopes for the study of flash-frozen biological samples.

Under the microscope, the researchers were able to recognize or – in jargon – “resolve” the structure of PspA. The structure of a protein is essential for its function and a defect in the structure can impair the protein function. “Under the microscope, we realized that PspA has a structure similar to ESCRT-III proteins, which our laboratory had already been working on. This came as a complete surprise and showed how important it is to elucidate protein structures in detail,” said Sachse. “After billions of years, the two groups of proteins have genetically diverged so far that their similarities could only be detected based on their structure.”

ESCRT-III proteins are found in all living organisms with a true cell nucleus, including human cells. Here, the ESCRT-III protein complexes are involved in cell membrane remodeling and repair but also play a key role in a number of other cell processes. In bacteria, no proteins of the ESCRT-III family were previously known. “Therefore, PspA and ESCRT-III belong to the same group of proteins. These two perform similar tasks at membranes inside of cells,” said Schneider.

“Based on the similar structural and functional properties of PspA and the eukaryotic ESCRT-III proteins, we have identified PspA as a bacterial member of the evolutionarily conserved ESCRT-III superfamily of membrane remodeling proteins,” the authors wrote in their article for Cell.

https://www.blogs.uni-mainz.de/fb09-schneider/ – Membrane Proteins group at the JGU Department of Chemistry ;

http://www.fz-juelich.de/er-c/er-c-3 – Structural Biology (ER-C-3) group at the Ernst Ruska-Centre for Microscopy and Spectroscopy with Electrons at Forschungszentrum Jülich ;