Seismometers listen to the resonance vibration of the Hochvogel, Allgäu 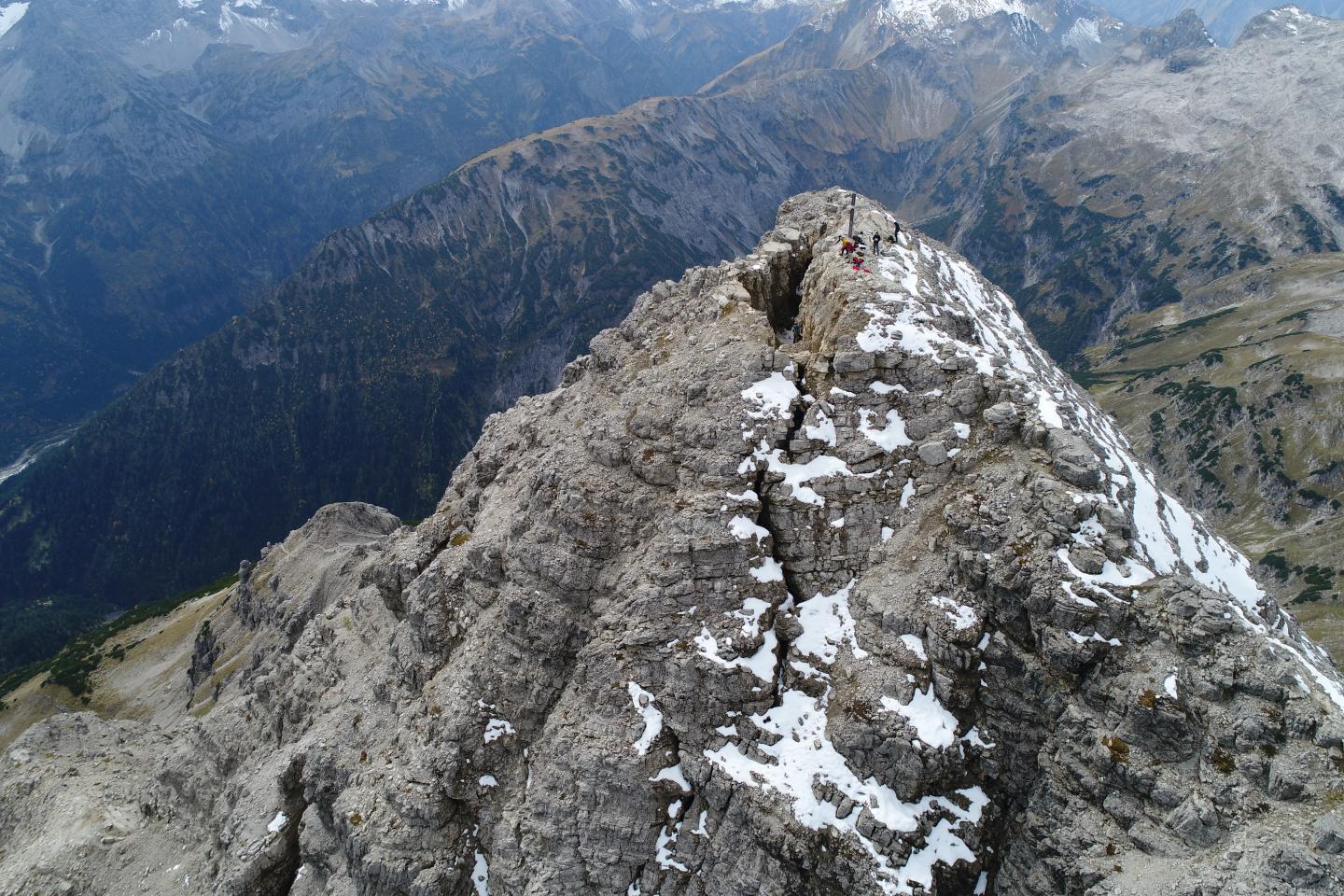 The entire summit of the 2592 metres high Hochvogel is sliced by a five metres wide and thirty metres long fracture. It continues to open up by up to half a centimetre per month. Throughout the years, the southern side of the mountain has already subsided by several meters; and at some point it will fail, releasing up to 260,000 cubic meters of limestone debris down into the Hornbach Valley in Austria. Such a volume would roughly correspond to 260 family houses. When this will happen is hard to predict by conventional methods. Researchers of the Helmholtz Centre Potsdam – German Research Centre for Geosciences and the Technical University of Munich have approached this question by seismic sensors. The devices record the subtle vibration of the peak: similar to a violin string which is pulled more or less does the pitch of the summit change as it becomes stressed, an effect that allows unique insight to the preparation phase of an upcoming rock slide. Thus, also a timely warning should become possible – even if human dwellings are not threatened directly at this site. The study has recently been published in the journal Earth Surface Processes and Landforms.

Large rock slope failures happen again and again. They play a central role in the long-term evolution of landscapes. And they are of fundamental interest in land use planning and hazard aspects. However, because they occur suddenly and then proceed at high speed, such mass movements are difficult to study. In general, it is clear that mechanical load or temperature fluctuations build up stress inside the rock, which is then released in processes of disintegration: cracks evolve on different spatial scales. At some point, the structure has become unstable enough to ultimately break apart. While the failure phase has already been well studied, there are still considerable knowledge gaps regarding their longer-term precursors. One reason is that the installation of permanent measurement equipment in high mountains is difficult and costly. The other reason is that long-term monitoring has so far often been carried out using remote sensing data or sensors that collect only point data. None of these approaches has been able to record the processes inside a rock volume at sufficient temporal and spatial detail, continuously and in a larger spatial context.

To understand when and why the instable rock mass at the Hochvogel becomes mobile, in 2018 researchers around Michael Dietze of the GFZ had deployed a network of six seismometers at the summit, each at a distance of thirty to forty meters from each other. For several months, the sensors have recorded the frequency with which the mountain swings back and forth. The vibrations are caused by wind and numerous small excitations of the Earth’s surface, and the summit’s frequency is determined by factors such as temperature, rock stress and material weakening.

During the summer of 2018, the researchers were able to measure a recurring sawtooth-like frequency pattern: Over a period of five to seven days, it rose repeatedly from 26 to 29 Hertz, only to drop back to its original value within less than two days. The increase in frequency is caused by stress increase within the rock mass. As the frequency drops, the sensors also recorded an increased rate of crack signals, as they are known to happen when rock is being torn apart. This cyclic increase and decrease of stress by jerky movement is also called stick slip motion. It is a typical precursor of large mass movements. The decisive factor here is that the closer this event comes, the shorter the observed cycles become, making them an important hazard indicator.

“With the help of the seismic approach, we can now for the first time sense, record and process this cyclical phenomenon continuously and almost at real time”, says Michael Dietze, post-doctoral researcher in the Geomorphology Section at GFZ. He collaborates with colleagues from the Technical University of Munich in the AlpSenseBench project, which focuses on instrumentation of further Alpine peaks to study progressive rock instability evolution.

Dietze estimates that the new seismic approach is still a fair bit from becoming a routine application: “We have currently shown the proof of concept, so to speak, and now the results have to be repeated elsewhere”. From a technical point of view, that shouldn’t be too difficult, Dietze believes. And with the increased activity on the many more peaks in the Alps, there are also plenty of areas of application.

Outlook: Role of water and ice in the fissures

In the course of their measurements, which – with interruptions due to lightning strikes – extended from July to October, the researchers made another interesting discovery: While the sawtooth-like build-up and release of stress was clearly visible in the first few months after snow melt, it disappeared in late summer of the drought year 2018. Apparently, the summit ran short in an essential lubricant during the summer: water. By then, only a diurnal up and down of the summit’s vibration frequency played a role: during the cold night hours the rock contracts, fissures become larger and the connection to the solid rock becomes less rigour, resulting in a decreasing vibration frequency. In turn, the heat of the sun lets the rock mass expand, closing small fissures and thus causing a rise of the vibration frequency.

Over a period of two more years, the researchers will now investigate how these dirurnal and longer period cycles interact and how the chilly winters will affect the deep, water filled crevices that cut the Hochvogel. This includes investigating the consequences of rock mass activity at the summit for the south facing hillslope by a larger seismic network that stretches down towards the Hornbachtal. Settlements in that valley will not be threatened by mass wasting along the slopes, but the access of the peak from this area has already been closed years ago due to an imminent rockfall risk.

Michael Dietze from the GFZ reports on his measurement campaign in summer 2018
https://www.instagram.com/p/CJDo2CYsRmU/