In Greek mythology, Demeter was the goddess of agriculture. In ancient times she was believed to be the creator of the seasons; spring, summer, autumn and winter. According to the myth, she had a retinue of priestesses who were called ‘Melisas’, so to reach Demeter, people had to speak to one of her ‘Melisas’. 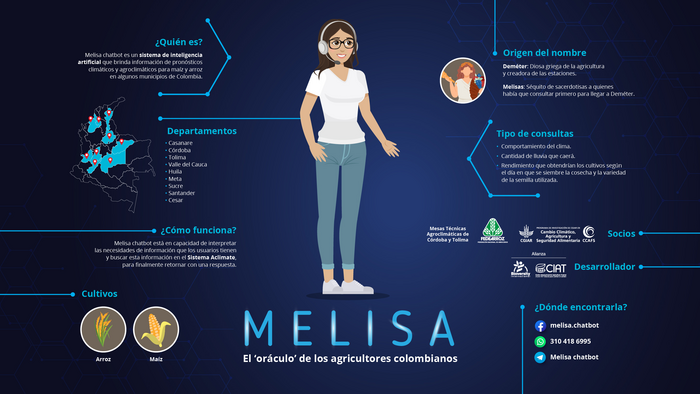 In Greek mythology, Demeter was the goddess of agriculture. In ancient times she was believed to be the creator of the seasons; spring, summer, autumn and winter. According to the myth, she had a retinue of priestesses who were called ‘Melisas’, so to reach Demeter, people had to speak to one of her ‘Melisas’.

In keeping with Greek mythology, the Alliance of Bioversity International and CIAT have just launched an artificial intelligence system that provides agro-climatic forecasts (Demeter) and a tool to consult the system, ‘Melisa chatbot’, available on Whatsapp, Facebook and Telegram.

“It all began in 2014, when CIAT started a project with the Ministry of Agriculture and the Environment, to develop a website to utilize agro-climatic bulletins that were generated from the agro-climatic technical committees in the regions. Three years later, we launched the agro-climatic forecasting platform Aclimate Colombia, which allows farmers to check rainfall forecasts in these times of climate change.

Now, in 2022, we are launching Démeter, which is an artificial intelligence system that offers long-term weather forecasting, and predicts potential crop yields for rice and corn – depending on weather conditions. The service is now available to farmers through our chatbot Melisa”,

The platform obtains weather forecasts from the Aclimate Colombia service, which is accessed through Melisa chatbot. It works like a contact on Whatsapp, Facebook and Telegram. For example, in the chat users can ask Melisa Chatbot, what the weather forecast is for Palmira, Colombia. She will answer that for the June, July and August 2022 quarter, there is a 74.8% probability that it will rain above the historical average.

You can also ask her what the rice crop yield would be, if a farmer sows it in Cereté, Córdoba. Melisa chatbot will reply that in clay soil and according to the rainfall forecast, the farmer will be able to obtain an average of six tons per hectare.

Melisa chatbot is able to interpret users’ information needs and search for the information in the Aclimate system, and provide users with accurate answers. The Aclimate agro-climatic forecasting platform generates forecasts about how much it will rain, how many tons of rice and corn a farmer will produce according to the date on which he sows, and the variety of seed he uses. At the moment, the Colombian departments covered by the service include Casanare, Córdoba, Tolima, Valle del Cauca, Huila, Meta, Sucre, Santander, and César.

“In brief, Melisa chatbot is a tool that seeks to help farmers to make the best decision when it comes to sowing, that is why it was created. Melisa chatbot’s objective is to interpret the simple and clear way in which people talk about the weather, and the technical language used by farmers, to offer agro-climatic forecasts to support decision-making at sowing time,” adds Sotelo.

In the future, the plan is for Melisa Chatbot to operate in areas where there is poor internet coverage, where it can be used on other channels such as SMS (text messaging).

“If farmers and rural communities can access and understand weather and climate forecasts and how these influence their crop production and markets, they can make better decisions. Chatbots like Melisa can provide important  information that can help farmers to adapt to market trends and new technologies. They are tools that offer the flexibility to respond to farmers’ specific questions and give relevant information to allow them to make key decisions about crop production,” says Sotelo.

At the moment, Melisa is available on Whatsapp, Facebook Messenger and Telegram. Users can search for Melisa on these networks or add her as one of their contacts. Once Melisa is  added as a contact, users can talk to her through the chat applications on both networks.

The project is supported by partners across Colombia: Fedearroz, the Agro-climatic Technical Committees of Córdoba and Tolima and the CGIAR Research Program on Climate Change, Agriculture and Food Security (CCAFS). The developer is the Alliance of Bioversity International and CIAT.

The Alliance of Bioversity International and CIAT data science for climate change action team is led by scientist Julián Ramírez.

Watch the recording of Melisa’s launch (in Spanish) via Facebook.