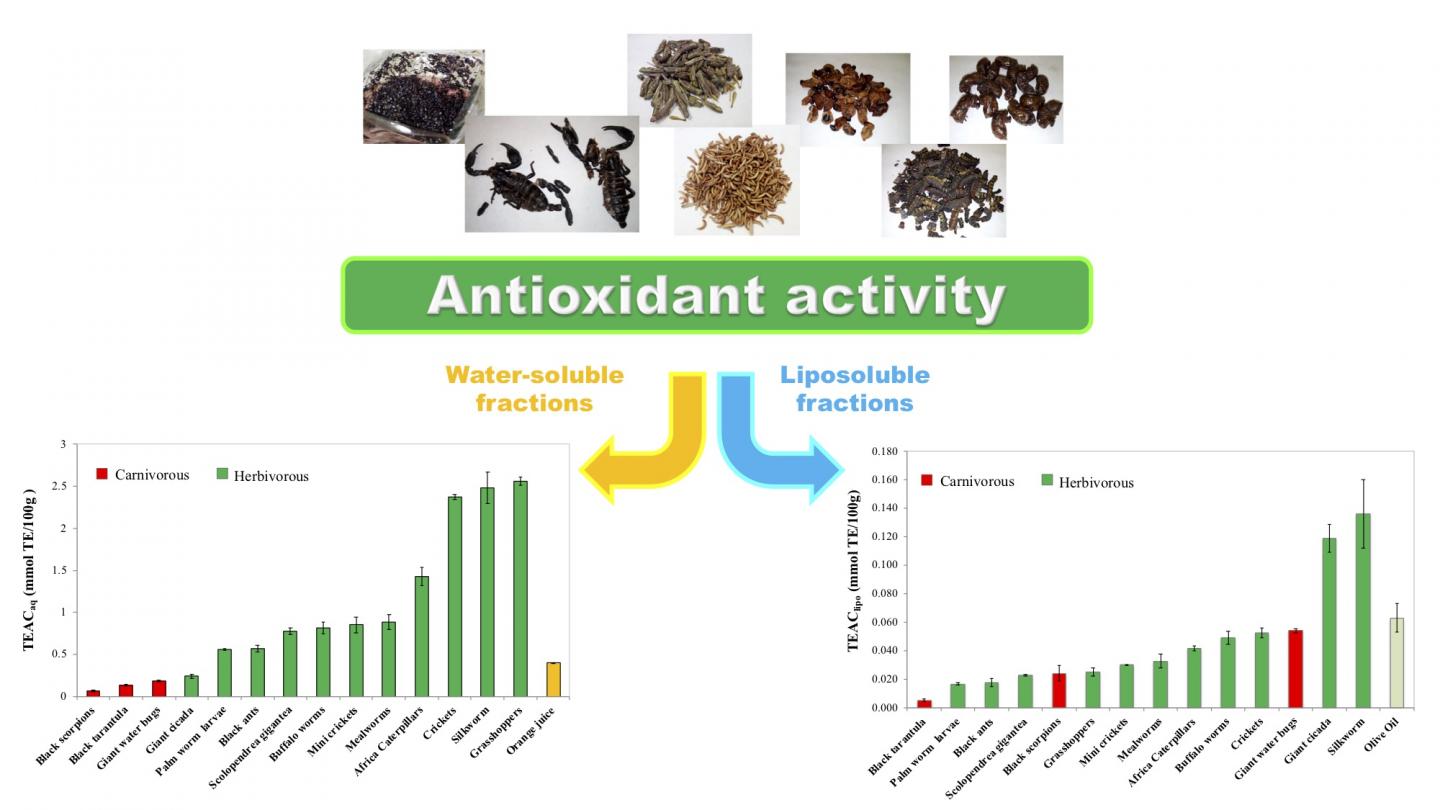 For the first time, a study has measured antioxidant levels in commercially available edible insects.

Sure, most of them don’t have six legs – and scorpions, spiders, and centipedes aren’t even insects. But for open-minded health freaks, it’s good news: crickets pack 75% the antioxidant power of fresh OJ, and silkworm fat twice that of olive oil.

And while even ladybugs fart, insects have a tiny land, water and carbon footprint compared with livestock – so anything that encourages insect eating is good news for the planet, too.

Faced with eating ourselves and the planet to death, the West has begun reluctantly to consider creepy crawlies as a more sustainable alternative to meat and animal products.

“At least 2 billion people – a quarter of the world’s population – regularly eat insects,” says Prof. Mauro Serafini, lead author of the study published in Frontiers in Nutrition. “The rest of us will need a bit more encouragement.”

Providing selfish and immediate incentives could help consumers to make the environmentally friendly choice, says Serafini. Taste and image are key – but for many, health is also an incentive.

“Edible insects are an excellent source of protein, polyunsaturated fatty acids, minerals, vitamins and fiber. But until now, nobody had compared them with classical functional foods such as olive oil or orange juice in terms of antioxidant activity.”

Antioxidant activity is that free-radical scavenging ability that typically designates a ‘superfood’ – although this poorly defined term is eschewed by researchers, says Serafini.

Inedible parts like wings and stings were removed, then the insects were ground and two parts extracted for each species: the fat, and whatever would dissolve in water.

Each extract was then tested for its antioxidant content and activity.

“For perspective, using the same setup we tested the antioxidant capacity of fresh orange juice and olive oil – functional foods that are known to exert antioxidant effects in humans,” Serafini explains.

Note that these comparisons are for the dry, fat-free insect dust – a tad tougher to swallow than fresh OJ. Even so, some quick math shows that at the same dilution (88% water), grasshoppers and silkworms would have about 75% the antioxidant activity of OJ.

Interestingly, the total content of polyphenols – the major source of plant-derived antioxidant activity – followed a similar pattern across species, but was far lower in all insects compared to OJ.

“These results suggest that besides polyphenols, the antioxidant capacity of insects also depends on other, as yet unknown compounds,” Serafini adds.

The results for the insect fat were similarly impressive.

“Fat from giant cicadas and silkworms showed twice the antioxidant activity of olive oil, while black tarantula, palm worm and black ants are placed in the bottom of the ranking.”

The group’s key message is: edible insects like grasshoppers and silkworms are a rich source of antioxidants.

“A high content of antioxidant in the food matrix is a primary requisite for a first screening of antioxidant potentiality of novel foods, so these are promising results.”

But the questions remains: what are these antioxidants, and do they work in humans?

“The in vivo efficiency of antioxidant-rich food is highly dependent on bioavailability and the presence of an ongoing oxidative stress. So as well as identifying other antioxidant compounds in insects, we need tailored intervention studies to clarify their antioxidant effects in humans.

“In the future, we might also adapt dietary regimens for insect rearing in order to increase their antioxidant content for animal or human consumption.”

Please link to the original research article in your reporting: https://www.frontiersin.org/articles/10.3389/fnut.2019.00106/full

Frontiers is an award-winning Open Science platform and leading open-access scholarly publisher. Our mission is to make high-quality, peer-reviewed research articles rapidly and freely available to everybody in the world, thereby accelerating scientific and technological innovation, societal progress and economic growth. Frontiers received the 2014 ALPSP Gold Award for Innovation in Publishing. For more information, visit http://www.frontiersin.org and follow @Frontiersin on Twitter.

New flying/driving robot developed at Ben-Gurion University of the…