BAR HARBOR, MAINE – In a seminal 2013 study, MDI Biological Laboratory scientist James Godwin, Ph.D., discovered that a type of white blood cell called a macrophage is essential to limb regeneration in the axolotl, a Mexican salamander that is nature’s champion of regeneration. 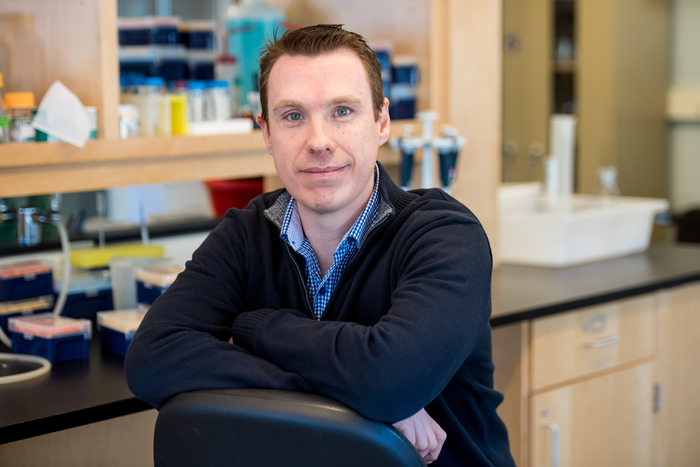 BAR HARBOR, MAINE – In a seminal 2013 study, MDI Biological Laboratory scientist James Godwin, Ph.D., discovered that a type of white blood cell called a macrophage is essential to limb regeneration in the axolotl, a Mexican salamander that is nature’s champion of regeneration.

Without macrophages, which are part of the immune system, regeneration did not take place. Instead of regenerating a limb, the axolotl formed a scar at the site of the injury, which acted as a barrier to regeneration, just as it would in a mammal such as a mouse or human. In terms of regenerative capability, Godwin had turned the salamander into a mammal. In a follow-up 2017 study, he found the same to be true in heart tissue.

Although the prospect of regrowing a human limb may be unrealistic in the short term due to a limb’s complexity, regenerative medicine therapies could potentially be employed in the shorter term in the treatment of the many diseases in which scarring plays a pathological role, including heart, lung and kidney disease, as well as in the treatment of scarring itself – for instance, in the case of burn victims.

“In our earlier research, we found that scar-free healing hinges on a single cell type, the macrophage,” Godwin said. “This finding means we have a way in. If axolotls can regenerate by having a single cell type as their guardian, then maybe we can achieve scar-free healing in humans by populating our bodies with an equivalent guardian cell type, which would open up the opportunity for regeneration.”

The paper on Godwin’s research, entitled “Identification of the Adult Hematopoietic Liver As the Primary Reservoir for the Recruitment of Pro-regenerative Macrophages Required for Salamander Limb Regeneration,” was recently published in the journal Frontiers in Cell and Developmental Biology.

In addition to the MDI Biological Laboratory, the research was conducted at the Australian Regenerative Medicine Institute (ARMI), with which Godwin was formerly associated, and The Jackson Laboratory (JAX) in Bar Harbor, Maine, where he holds a joint appointment. The MDI Biological Laboratory and ARMI have a partnership agreement to promote research and education on regeneration and the development of new therapies to improve human health.

The role of scar-free repair

If the regenerative process at the site of an injury can be compared to a party – an analogy Godwin often uses – his research has revealed the category of guest who attends and, now, where the guests come from and how and when they get there. The next step will be to nail down their specific identities, or as he puts it, the “flavors” of macrophages required for regeneration, and how they interact with other guests.

That research will revolve around the study of scarring, or fibrosis, which in adult mammals blocks regeneration through its effect on tissue function and integrity.

Although it remains to be seen if achieving scar-free healing in mammals will allow regeneration to proceed –other processes may also be involved – Godwin believes that may be the case. Because mammals already possess the machinery for regeneration – young mice can regenerate, as can human newborns – mammalian regeneration may simply be a matter of removing the barrier posed by scarring.

“In axolotls, macrophages act as a brake on fibrosis, or scarring,” he said. “Humans may possess macrophages that are doing their hardest to repair the damage, but are being held back. If we can engineer human macrophages to promote scar-free healing, we might be able to achieve a huge improvement in repair with just a little tweak. Wouldn’t it be awesome if we didn’t have to do anything other than that?”

In an intriguing insight into a potential route to engineering regeneration in adult mammals, Godwin noted that the primary source of macrophages at the site of a wound in the developing mouse is the liver, just as his recent research found it to be in the axolotl; the mouse loses its ability to regenerate when the source of macrophages shifts to the bone marrow shortly after birth, as it also does in humans.

The development of a new toolkit

Though Godwin’s recent research focused on the origin of pro-regenerative macrophages, its most significant contribution may be the development of a toolkit for profiling and sorting immune cells. While the axolotl is a powerful model in regenerative biology research, that research has been held back by the lack of tools for assessing the diverse roles of the immune cells that are critical to the regenerative process.

Godwin, who is an immunologist, originally chose to examine the function of the immune system in regeneration because of its role in preparing the wound for repairs. Using the new toolkit, he now plans to systematically alter the axolotl’s genes to assess the functions of macrophages, starting with the interaction between macrophages and fibroblasts, a type of connective tissue cell responsible for directing wound repair.

“We want to find out what so special about the interaction between macrophages and fibroblasts in axolotl regeneration,” he said. “We have the luxury in the salamander of being able to work out which macrophage functions are essential to scar suppression and regeneration, gene by gene if we have to. If we can find out what that is, then maybe we can get that interaction happening in mammals.”

Once he has profiled the functions of axolotl macrophages at the site of an injury, Godwin’s goal will then be to use the mouse model to either tease elusive pro-regenerative macrophages out of the mammalian system or engineer mammalian macrophages to be more an axolotl’s. His work in the mouse model is supported by his appointment at The Jackson Laboratory, which focuses on mouse biology and genetics.

“In elucidating the differences between macrophages in the axolotl and mouse, James is carrying on a tradition of comparative biology that has been the focus of research at the MDI Biological Laboratory for more than 120 years,” said President Hermann Haller, M.D. “His discoveries demonstrate that our approach of gaining insight into human health from the comparative study of animal models is as powerful as ever.”

Godwin’s research was supported by funds from the National Institute of General Medical Sciences (NIGMS)of the National Institutes of Health (NIH) under grant numbers P20GM0103423 and P20GM104318 to the MDI Biological Laboratory, by JAX institutional support and by grants to ARMI from the State Government of Victoria and the Australian government.

About the MDI Biological Laboratory

We aim to improve human health and healthspan by uncovering basic mechanisms of tissue repair, aging and regeneration, translating our discoveries for the benefit of society and developing the next generation of scientific leaders. For more information, please visit mdibl.org.

Frontiers in Cell and Developmental Biology