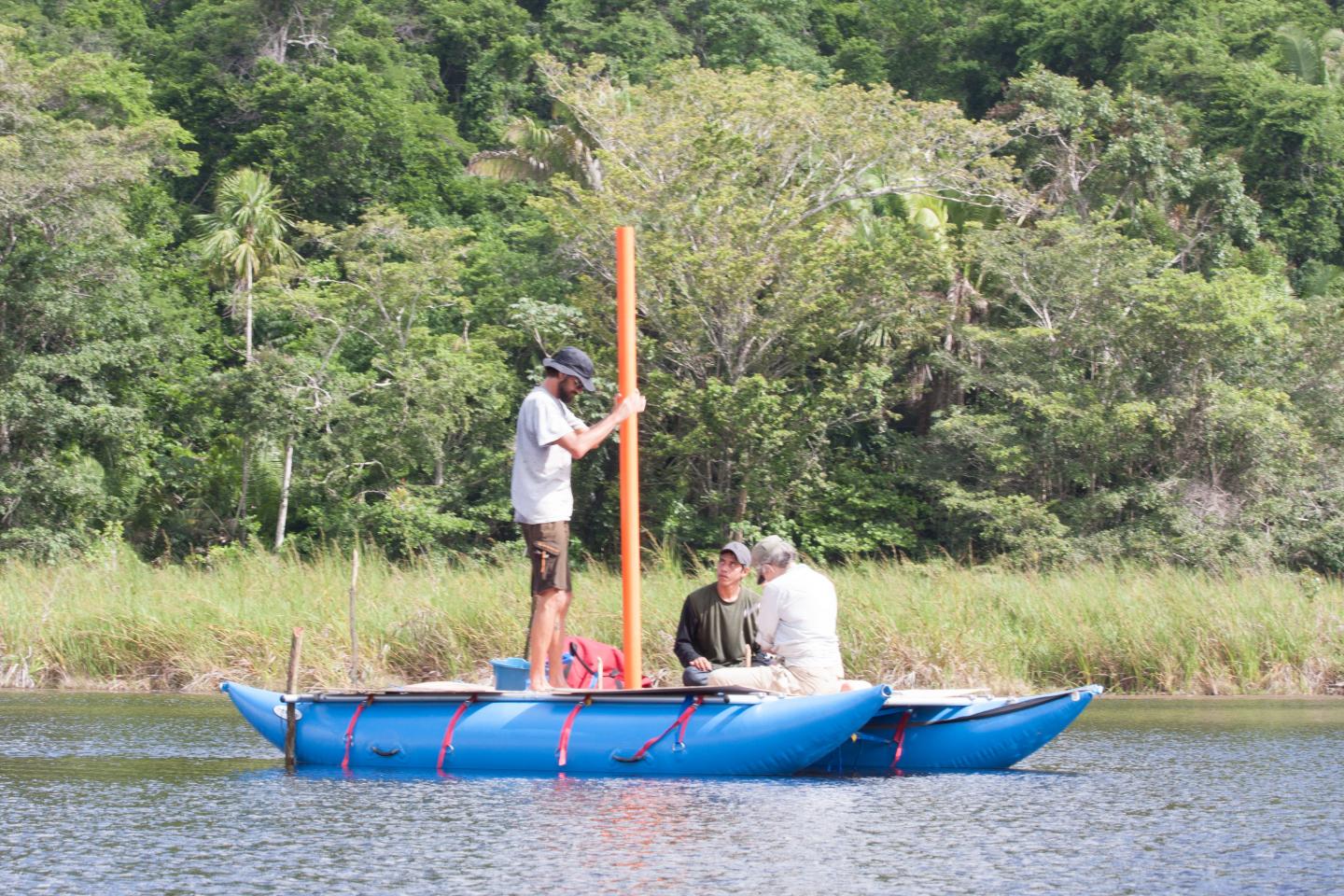 The Maya of Central America are thought to have been a kinder, gentler civilization, especially compared to the Aztecs of Mexico. At the peak of Mayan culture some 1,500 years ago, warfare seemed ritualistic, designed to extort ransom for captive royalty or to subjugate rival dynasties, with limited impact on the surrounding population.

Only later, archeologists thought, did increasing drought and climate change lead to total warfare — cities and dynasties were wiped off the map in so-called termination events — and the collapse of the lowland Maya civilization around 1,000 A.D. (or C.E., current era).

New evidence unearthed by a researcher from the University of California, Berkeley, and the U.S. Geological Survey calls all this into question, suggesting that the Maya engaged in scorched-earth military campaigns — a strategy that aims to destroy anything of use, including cropland — even at the height of their civilization, a time of prosperity and artistic sophistication.

The finding also indicates that this increase in warfare, possibly associated with climate change and resource scarcity, was not the cause of the disintegration of the lowland Maya civilization.

“These data really challenge one of the dominant theories of the collapse of the Maya,” said David Wahl, a UC Berkeley adjunct assistant professor of geography and a researcher at the USGS in Menlo Park, California. “The findings overturn this idea that warfare really got intense only very late in the game.”

“The revolutionary part of this is that we see how similar Mayan warfare was from early on,” said archaeologist Francisco Estrada-Belli of Tulane University, Wahl’s colleague. “It wasn’t primarily the nobility challenging one another, taking and sacrificing captives to enhance the charisma of the captors. For the first time, we are seeing that this warfare had an impact on the general population.”

The evidence, reported today in the journal Nature Human Behaviour, is an inch-thick layer of charcoal at the bottom of a lake, Laguna Ek’Naab, in Northern Guatemala: a sign of extensive burning of a nearby city, Witzna, and its surroundings that was unlike any other natural fire recorded in the lake’s sediment.

The charcoal layer dates from between 690 and 700 A.D., right in the middle of the classic period of Mayan civilization, 250-950 A.D. The date for the layer coincides exactly with the date — May 21, 697 A.D. — of a “burning” campaign recorded on a stone stela, or pillar, in a rival city, Naranjo.

“This is really the first time the written record has been linked to an event in the paleo data sets in the New World,” Wahl said. “In the New World, there is so little writing, and what’s preserved is mostly on stone monuments. This is unique in that we were able to identify this event in the sedimentary record and point to the written record, particularly these Mayan hieroglyphs, and make the inference that this is the same event.”

Wahl, a geologist who studies past climate and is first author of the study, worked with USGS colleague Lysanna Anderson and Estrada-Belli to extract 7 meters of sediment cores from the lake. Laguna Ek’Naab, which is about 100 meters across, is located at the base of the plateau where Witzna once flourished and has collected thousands of years of sediment from the city and its surrounding agricultural fields. After seeing the charcoal layer, the archaeologists examined many of Witzna’s ruined monuments still standing in the jungle and found evidence of burning in all of them.

“What we see here is, it looks like they torched the entire city and, indeed, the entire watershed,” Wahl said. “Then, we see this really big decrease in human activity afterwards, which suggests at least that there was a big hit to the population. We can’t know if everyone was killed or they moved or if they simply migrated away, but what we can say is that human activity decreased very dramatically immediately after that event.”

This one instance does not prove that the Maya engaged in total warfare throughout the 650-year classic period, Estrada-Belli said, but it does fit with increasing evidence of warlike behavior throughout that period: mass burials, fortified cities and large standing armies.

“We see destroyed cities and resettled people similar to what Rome did to Carthage or Mycenae to Troy,” Estrada-Belli said.

And if total warfare was already common at the peak of Mayan lowland civilization, then it is unlikely to have been the cause of the civilization’s collapse, the researchers argue.

“I think, based on this evidence, the theory that a presumed shift to total warfare was a major factor in the collapse of Classic Maya society is no longer viable,” said Estrada-Belli. “We have to rethink the cause of the collapse, because we’re not on the right path with warfare and climate change.”

Though Mayan civilization originated more than 4,000 years ago, the Classic period is characterized by widespread monumental architecture and urbanization exemplified by Tikal in Guatemala and Dzibanché in Mexico’s Yucatan. City-states — independent states made up of cities and their surrounding territories — were ruled by dynasties that, archaeologists thought, established alliances and waged wars much like the city-states of Renaissance Italy, which affected the nobility without major impacts on the population.

In fact, most archaeologists believe that the incessant warfare that arose in the terminal Classic period (800-950 A.D.), presumably because of climate change, was the major cause of the decline of Mayan cities throughout present day El Salvador, Honduras, Guatemala, Belize and Southern Mexico.

So when Wahl, Anderson and Estrada-Belli discovered the charcoal layer in 2013 in Laguna Ek’Naab — a layer unlike anything Wahl had seen before — they were puzzled. The scientists had obtained the lake core in order to document the changing climate in Central America, hoping to correlate these with changes in human occupation and food cultivation.

The puzzle lingered until 2016, when Estrada-Belli and co-author Alexandre Tokovinine, a Mayan epigrapher at the University of Alabama, discovered a key piece of evidence in the ruins of Witzna: an emblem glyph, or city seal, identifying Witzna as the ancient Mayan city Bahlam Jol. Searching through a database of names mentioned in Mayan hieroglyphs, Tokovinine found that very name in a “war statement” on a stela in the neighboring city-state of Naranjo, about 32 kilometers south of Bahlam Jol/Witzna.

The statement said that on the day “… 3 Ben, 16 Kasew (‘Sek’), Bahlam Jol ‘burned’ for the second time.” According to Tokovinine, the connotation of the word “burned,” or puluuy in Mayan, has always been unclear, but the date 3 Ben, 16 Kasew on the Mayan calendar, or May 21, 697, clearly associates this word with total warfare and the scorched earth destruction of Bahlam Jol/Witzna.

“The implications of this discovery extend beyond mere reinterpretation of references to burning in ancient Maya inscriptions,” Tokovinine said. “We need to go back to the drawing board on the very paradigm of ancient Maya warfare as centered on taking captives and extracting tribute.”

Three other references to puluuy or “burning” are mentioned in the same war statement, referencing the cities of Komkom, known today as Buenavista del Cayo; K’an Witznal, now Ucanal; and K’inchil, location unknown. These cities may also have been decimated, if the word puluuy describes the same extreme warfare in all references. The earlier burning of Bahlam Jol/Witzna mentioned on the stela may also have left evidence in the lake cores — there are three other prominent charcoal layers in addition to the one from 697 A.D. — but the date of the earlier burning is unknown.

Mayan archaeologists have reconstructed some of the local history, and it’s known that the conquest of Bahlam Jol/Witzna was set in motion by a queen of Naranjo, Lady 6 Sky, who was trying to reestablish her dynasty after the city-state had declined and lost all its possessions. She set her seven-year-old son, Kahk Tilew, on the throne and then began military campaigns to wipe out all the rival cities that had rebelled, Estrada-Belli said.

“The punitive campaign was recorded as being waged by her son, the king, but we know it’s really her,” he said.

That was not the end of Bahlam Jol/Witzna, however. The city revived, to some extent, with a reduced population, as seen in the lake cores. And the emblem glyph was found on a stela erected around 800 A.D, 100 years after the city’s destruction. The city was abandoned around 1,000 A.D.

“The ability to tie geologic evidence of a devastating fire to an event noted in the epigraphic record, made possible by the relatively uncommon discovery of an ancient Maya city’s emblem glyph, reflects a confluence of findings nearly unheard of in the field of geoarchaeology,” Wahl said.