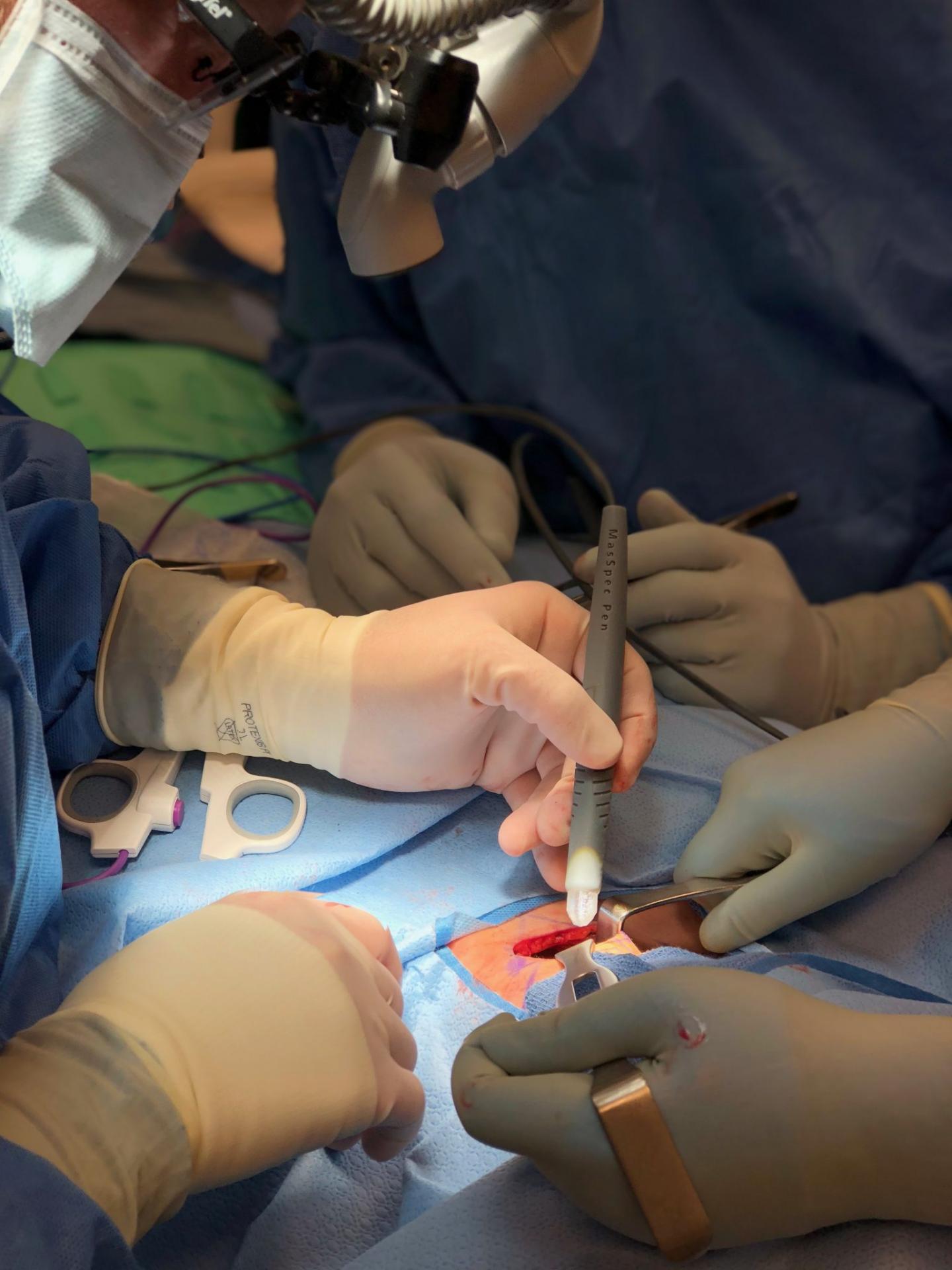 AUSTIN, Texas — A diagnostic tool called the MasSpec Pen has been tested for the first time in pancreatic cancer patients during surgery. The device is shown to accurately identify tissues and surgical margins directly in patients and differentiate healthy and cancerous tissue from banked pancreas samples. At about 15 seconds per analysis, the method is more than 100 times as fast as the current gold standard diagnostic, Frozen Section Analysis. The ability to accurately identify margins between healthy and cancerous tissue in pancreatic cancer surgeries can give patients the greatest chance of survival.

The results, by a team from The University of Texas at Austin and Baylor College of Medicine, are published this week in the Proceedings of the National Academy of Sciences.

“These results show the technology works in the clinic for surgical guidance,” said Livia Schiavinato Eberlin, an assistant professor of chemistry at UT Austin who leads the team that invented the pen, in collaboration with James Suliburk, head of endocrine surgery at Baylor. “Surgeons can easily integrate the MasSpec Pen into their workflow, and the initial data really supports the diagnostic accuracy we were expecting to achieve.”

The most common type of pancreatic cancer, pancreatic ductal adenocarcinoma, spreads rapidly and is highly lethal, with a five-year survival rate of 9% for all stages. The most effective treatment option is surgical removal of the tumor.

Cancer surgeons face a dilemma: It’s often difficult to tell good tissue from bad. If any cancerous tissue is left behind, there’s a risk the tumor will regrow, potentially requiring the patient to undergo additional rounds of surgery, radiation or chemotherapy, and decreasing the chances of survival. On the other hand, removing too much healthy tissue, especially from vital organs, can also compromise a patient’s health. Determining the margin between healthy and cancerous tissue is critical to a successful surgery.

For this study, the investigators first used the MasSpec Pen to analyze 157 banked human pancreatic tissues to develop and evaluate the technology in the laboratory for pancreatic cancer. Then, the investigators moved the system to the operating room at Baylor St. Luke’s Medical Center in Houston, which is affiliated with Baylor College of Medicine, where the surgeons tested the technology in 18 pancreatic surgeries. The pen has been tested in more than 150 human surgeries to date, including for breast and thyroid, and results of those additional tests will be submitted for publication soon.

Mary King, a graduate student and the study’s first author, and other members of the Eberlin research group operated the mass spectrometer during surgery.

A typical surgery to remove a pancreatic tumor can take from 6 to 12 hours.

“Surgery of the pancreas is a very complex and detailed surgery that requires numerous intraoperative decisions over several hours that can have long-lasting effects on oncologic outcomes for patients with pancreas cancer,” said George Van Buren, M.D., associate professor of surgery at Baylor and one of the surgeons who performed operations during the experiment. “The MasSpec Pen technology opens the door for real-time, precision medicine to be performed in the operating room at a level that has never been seen before.”

These are the first published results of intraoperative use of the MasSpec Pen, in other words, on intact or just-removed tissue from patients during surgery. Preclinical research published about the technology in 2017 led to widespread enthusiasm and interest, including from writers in Hollywood who adapted the idea for a segment on the television program “Grey’s Anatomy.”

The researchers plan eventually to submit the design to the U.S. Food and Drug Administration for approval as a medical device.

Banked tissue samples were provided by the Cooperative Human Tissue Network and Baylor.

This work was supported in part by the National Cancer Institute of the National Institutes of Health, and by the Gordon and Betty Moore Foundation. Livia Eberlin receives support for research in her lab from the Cancer Prevention and Research Institute of Texas.

The University of Texas at Austin is committed to transparency and disclosure of all potential conflicts of interest. The university investigator who led this research, Livia Schiavinato Eberlin, has submitted required financial disclosure forms with the university. Eberlin is a co-founder with an equity stake in MSP Technologies, an inventor-led startup formed to commercialize the MasSpec Pen technology, owned by the university.