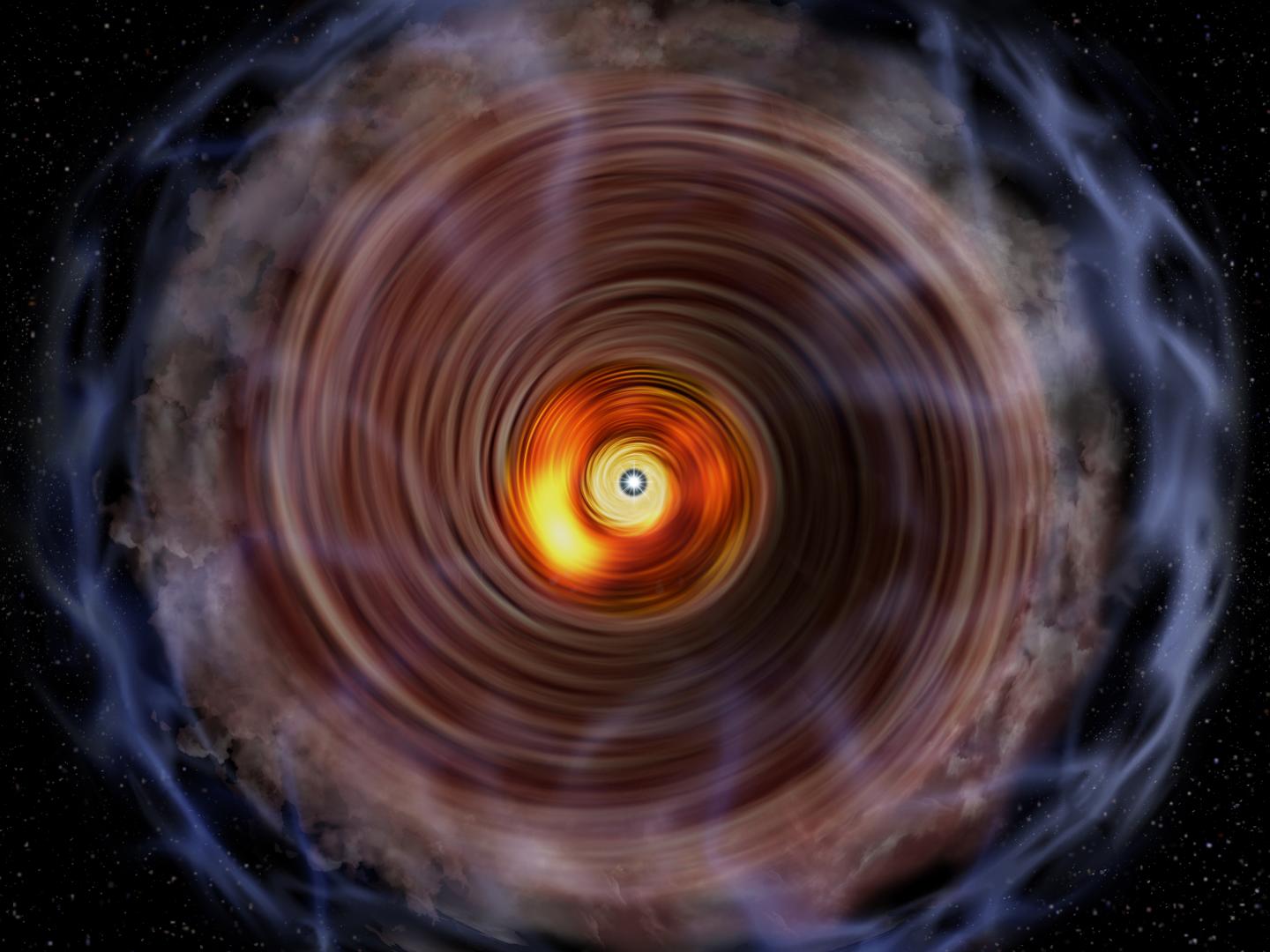 Astronomers obtained the first detailed face-on view of a gaseous disk feeding the growth of a massive baby star. They found that it shares many common features with lighter baby stars. This implies that the process of star formation is the same, regardless of the final mass of the resulting star. This finding paves the way for a more complete understanding of star formation.

A protostar, a baby star still in the process of forming, is fed by a surrounding disk of gas falling towards the center. The details of the process, such as why stars form with a wide range of masses, are still unclear. Low mass stars are being formed in the vicinity of the Solar System, allowing astronomers to see the process up-close. On the other hand, massive protostars are rare, and even the nearest are located quite far away from us.

Kazuhito Motogi, an assistant professor at Yamaguchi University, Japan, and his team used the Atacama Large Millimeter/submillimeter Array (ALMA) to observe a massive protostar called G353.273+0.641 (hereafter G353). Located 5500 light-years away in the constellation Scorpius, G353 has a mass 10 times larger than the Sun, and is still growing. It is a unique target among massive protostars because we can see its gaseous disk from straight above. ALMA has revealed detailed views of several other massive infant stars, however, most of them are in edge-on configurations, making it difficult to see the inner regions of the disks.

ALMA observations captured a rotating disk around G353 with a radius eight times larger than the orbit of Neptune. This sounds huge, but it is one of the smallest disks yet found around a massive protostar. ALMA also found that the disk is surrounded by an envelope of gas three times larger than the disk.

“We measured the gas infall rate from the outer envelope to the inner disk,” says Motogi. “This helps us to estimate the age of the baby star. Surprisingly it is only 3000 years old, the youngest among known massive protostars. We are witnessing the earliest phase of the growth of a giant star.”

Interestingly, the disk is not uniform; the south-eastern side of the disk is brighter than other parts. This is the first time astronomers have seen an asymmetric disk around a massive protostar. The team also found that the disk is highly unstable and going to fragment. The uneven disk might be caused by this instability. These features are often seen around smaller protostars, suggesting that the essential physical processes are the same in low-mass and high-mass star formation.

“Previous studies had implied that the formation process might be different for stars of different masses,” says Motogi. “Our new observations show the similarity. This is an important step to understand how massive protostars gain mass from the surroundings.”

The research team members are:

Yamaguchi University is a comprehensive national university with over 10,000 students in 9 faculties and 8 graduate schools. The university traces its origins back to Yamaguchi Kodo, a private school started in 1815. Yamaguchi University has put these values to words in our motto: “Discover it. Nourish it. Realize it. A Place of Wisdom,” and contributes to local development and to the development of Japanese and international society through the three fields of education, research, and social contribution.

Most powerful and mildest reagents obtained based on eco-friendly iodine

How the brain remembers where you’re heading to