PULLMAN, Wash. – A little Martian dust appears to go a long way. A small amount of simulated crushed Martian rock mixed with a titanium alloy made a stronger, high-performance material in a 3D-printing process that could one day be used on Mars to make tools or rocket parts. 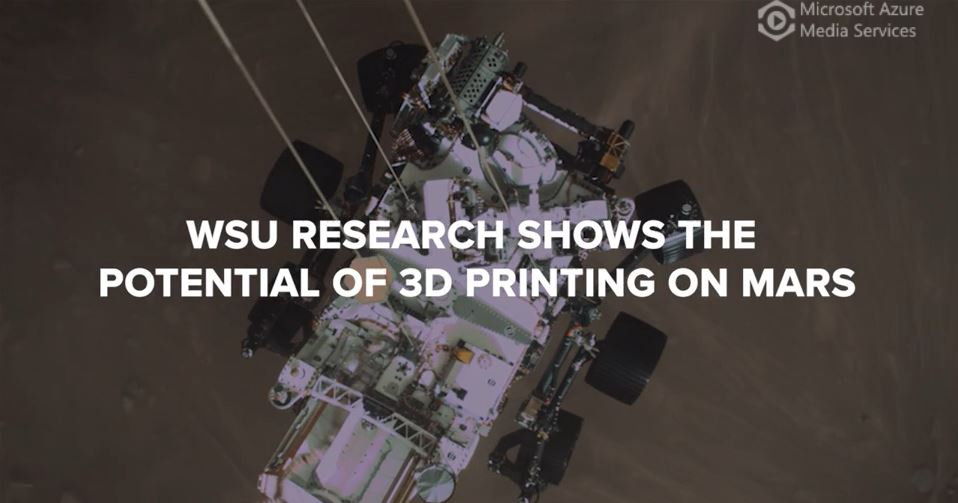 PULLMAN, Wash. – A little Martian dust appears to go a long way. A small amount of simulated crushed Martian rock mixed with a titanium alloy made a stronger, high-performance material in a 3D-printing process that could one day be used on Mars to make tools or rocket parts.

The parts were made by Washington State University researchers with as little as 5% up to 100% Martian regolith, a black powdery substance meant to mimic the rocky, inorganic material found on the surface of the red planet.

While the parts with 5% Martian regolith were strong, the 100% regolith parts proved brittle and cracked easily. Still, even high-Martian content materials would be useful in making coatings to protect equipment from rust or radiation damage, said Amit Bandyopadhyay, corresponding author on the study published in the International Journal of Applied Ceramic Technology.

“In space, 3D printing is something that has to happen if we want to think of a manned mission because we really cannot carry everything from here,” said Bandyopadhyay, a professor in WSU’s School of Mechanical and Materials Engineering. “And if we forgot something, we cannot come back to get it.”

Bringing materials into space can be extremely expensive. For instance, the authors noted it costs about $54,000 for the NASA space shuttle to put just one kilogram of payload (about 2.2 pounds) into Earth orbit. Anything that can be made in space, or on planet, would save weight and money – not to mention if something breaks, astronauts would need a way to repair it on site.

Bandyopadhyay first demonstrated the feasibility of this idea in 2011 when his team used 3D-printing to manufacture parts from lunar regolith, simulated crushed moon rock, for NASA. Since then, space agencies have embraced the technology, and International Space Station has its own 3D-printers to manufacture needed materials on site and for experiments.

For this study, Bandyopadhyay along with graduate students Ali Afrouzian and Kellen Traxel, used a powder-based 3D printer to mix the simulated Martian rock dust with a titanium alloy, a metal often used in space exploration for its strength and heat-resistant properties. As part of the process, a high-powered laser heated the materials to over 2,000 degrees Celsius (3,632 F). Then, the melted mix of Martian regolith-ceramic and metal material flowed onto a moving platform that allowed the researchers to create different sizes and shapes. After the material cooled down, the researchers tested it for strength and durability.

The ceramic material made from 100% Martian rock dust cracked as it cooled, but as Bandyopadhyay pointed out it could still make good coatings for radiation shields as cracks do not matter in that context. But just a little Martian dust, the mixture with 5% regolith, not only did not crack or bubble but also exhibited better properties than the titanium alloy alone, which meant it could be used to make lighter weight pieces that could still bear heavy loads.

“It gives you a better, higher strength and hardness material, so that can perform significantly better in some applications,” he said.

“This establishes that it is possible, and maybe we should think in this direction because it’s not just making plastic parts which are weak but metal-ceramic composite parts which are strong and can be used for any kind of structural parts,” he said.