Mars rover’s laser can now target rocks all by itself 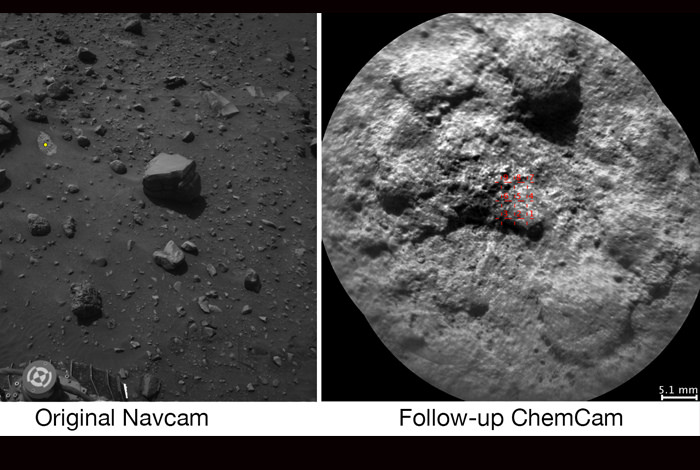 NASA’s Curiosity Mars rover autonomously selects some targets for the laser and telescopic camera of its ChemCam instrument. For example, on-board software analyzed the Navcam image at left, chose the target indicated with a yellow dot, and pointed ChemCam for laser shots and the image at right.

LOS ALAMOS, N.M., July 21, 2016—New software is enabling ChemCam, the laser spectrometer on NASA’s Curiosity Mars rover, to select rock targets autonomously—the first time autonomous target selection is available for an instrument of this kind on any robotic planetary mission. Developed jointly at Los Alamos National Laboratory and the Research Institute in Astrophysics and Planetology in Toulouse, France, the ChemCam (chemistry and camera) instrument aboard Curiosity “zaps” rocks on Mars and analyzes their chemical make-up. While most ChemCam targets are still selected by scientists, the rover itself now chooses multiple targets per week.

“This new capability will give us a chance to analyze even more rock and soil samples on Mars,” said Roger Wiens, principal investigator for ChemCam at Los Alamos. “The science team is not always available to pick samples for analysis. Having a smarter rover that can pick its own samples is completely in line with self-driving cars and other smart technologies being implemented on Earth.”

To select a target autonomously, the software uses adjustable criteria specified by scientists, such as identifying rocks based on their size or brightness. The criteria can be changed depending on the rover’s surroundings and the scientific goals of the measurements.

ChemCam’s spectrometers record the wavelengths seen through a telescope while the laser is firing. This information enables Los Alamos scientists to identify chemical composition of the targets. Through the same telescope, the instrument on the rover’s mast takes images that are of the highest resolution available. In nearly four years since landing on Mars, ChemCam has analyzed roughly 1,500 rock and soil samples with more than 350,000 total laser shots at about 10,000 points in all. Los Alamos’ work on discovery-driven instruments like ChemCam stems from the Laboratory’s experience building and operating more than 500 spacecraft instruments for national defense.

The autonomous software is called AEGIS (Autonomous Exploration for Gathering Increased Science) and was developed by engineers at the Jet Propulsion Laboratory. It has previously been used on NASA’s Mars Exploration Rover Opportunity to analyze images from a wide-angle camera as the basis for autonomously selecting rocks to photograph with a narrower-angle camera. Development work on AEGIS won a NASA Software of the Year Award in 2011.

The most frequent application of AEGIS uses onboard computer analysis of images from Curiosity’s stereo Navigation Camera (Navcam), which are taken routinely at each location where the rover ends a drive. AEGIS selects a target and points ChemCam, typically before the Navcam images are transmitted to Earth. This gives the team an extra jump in assessing the rover’s latest surroundings and planning operations for upcoming days.

Another AEGIS mode starts with images from ChemCam’s own Remote Micro-Imager, rather than the Navcam, and uses image analysis to hone pointing of the laser at fine-scale targets chosen in advance by scientists. For example, based on images received on Earth, scientists might select a threadlike vein or a small concretion in a rock. AEGIS then controls the laser sharpshooting.

“Due to their small size and other pointing challenges, hitting these targets accurately with the laser has often required the rover to stay in place while ground operators fine tune pointing parameters,” says robotics engineer Tara Estlin, the leader of AEGIS development at JPL. “AEGIS enables these targets to be hit on the first try by automatically identifying them and calculating a pointing that will center a ChemCam measurement on the target.”

From the top of Curiosity’s mast, the instrument can analyze the composition of a rock or soil target from up to about 23 feet (7 meters) away.

The Curiosity mission is using ChemCam and other instruments on the rover as the vehicle investigates geological layers on lower Mount Sharp. The rover’s extended mission is analyzing evidence about how the environment in this part of Mars changed billions of years ago from conditions well-suited to microbial life, if any life has ever existed on Mars, to dry, inhospitable conditions. For more information about Curiosity, visit: http://mars.jpl.nasa.gov/msl.