Marmosets practise calling their mother in the womb

Baby marmosets begin practising the face and mouth movements necessary to call their family  for help before they are born, shows a study published today in eLife. 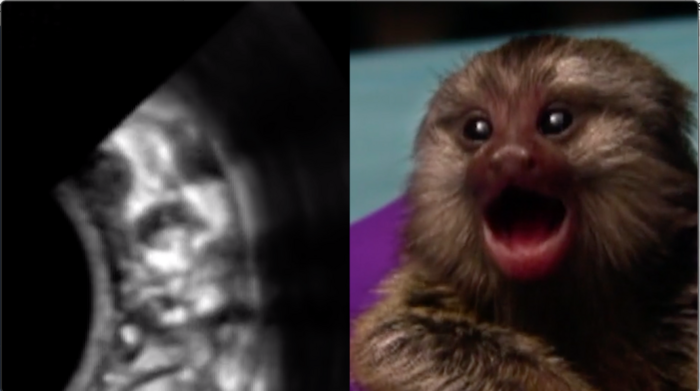 Baby marmosets begin practising the face and mouth movements necessary to call their family  for help before they are born, shows a study published today in eLife.

This finding may also apply to humans, as ultrasounds in the third trimester of pregnancy have shown developing humans in the womb making crying-like movements.

The first cries and coos of humans and other primates are essential to their survival. In addition to allowing them to call their family members for help, these vocalisations and interactions with their parents and other caregivers lay the groundwork for more complex communication later in life.

“We wanted to know how those very first neonatal vocalisations develop,” says lead author Darshana Narayanan, who conducted the study as a graduate student at the Department of Psychology and the Princeton Neuroscience Institute, Princeton University, New Jersey, US.

Narayanan and colleagues conducted ultrasounds two to three times per week in four pregnant marmosets for a total of 14–17 ultrasound sessions per marmoset, starting when the face first became visible on ultrasound and ending the day before birth. The team used the ultrasound scans to longitudinally track the head, face and mouth movements of the developing marmosets and compared them with the newborn marmosets’ movements when they called out.

Using frame-by-frame analysis, the team found that the developing marmosets’ head and mouth movements coordinated initially, but the mouth movement became distinct over time. Eventually, they became almost indistinguishable from movements made by crying newborn marmosets briefly separated from their mothers within the first 24 hours after birth.

To verify that these movements were not generic head and mouth movements, the team also compared pre and postnatal licking movements and movements associated with another marmoset vocalisation called a “twitter”. Their results showed that the pattern of crying movements before and following birth was distinct from the licking or twitter movements.

“Our experiments show that marmosets begin practising the movements needed for important social calls even before they can generate a sound,” Narayanan says. She adds that studying these movements further in marmosets may help scientists learn more about the development of social vocalisations in other primates, including humans.