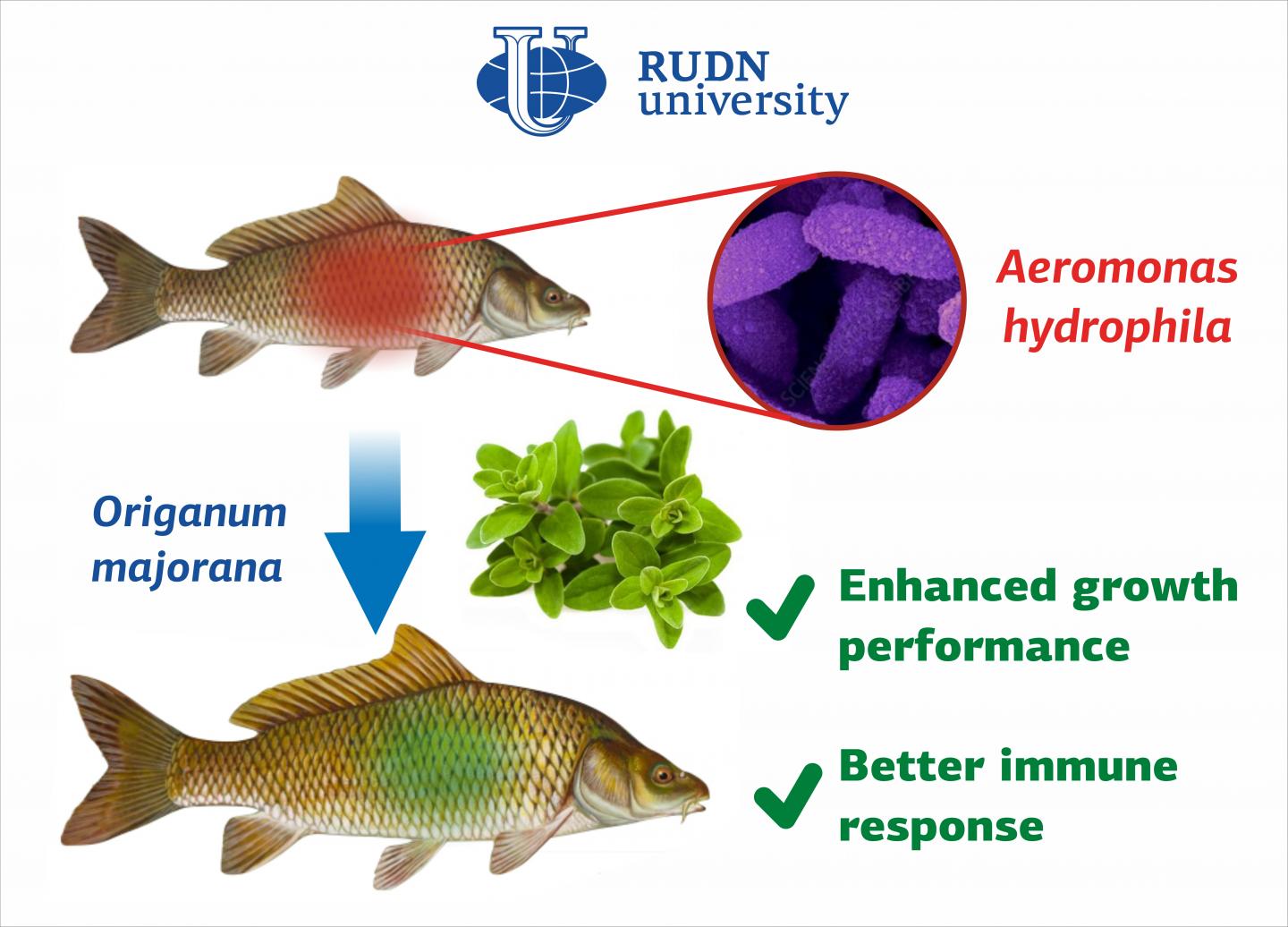 Biologists from RUDN University suggested adding a marjoram-based supplement to the diet of common carp to support the growth of the fish and improve their resistance to bacterial infections. The results of the study were published in the Fish & Shellfish Immunology journal.

Cyprinus carpio is a type of large omnivore fish that grows 35-40 cm long in three to five years. 4 mln tons of carps were bred in aquacultural farms in 2010. Such farms protect natural populations of Cyprinus carpio while at the same time satisfying the market demand. However, as farmers strive for higher productivity, aquacultural farms become more and more crowded which leads to the lack of nutrients and harms the health of the fish. A team of veterinarians from RUDN University tested the effect of a dietary supplement based on marjoram (a herb from the genus Origanum) on farm-bred carps.

“The profitability of a fish farm directly correlates with the stability and efficiency of production which is based on the health of the fish. Fish under stress are more susceptible to disease, and after being treated with antibiotics for some time they develop resistance. Moreover, antibiotics are harmful to the environment and can potentially affect the health of consumers. The best way to combat diseases is via dietary supplements that suppress stress, improve the health of the fish, and support their immunity,” said Morteza Yousefi, PhD, an assistant professor at the Department of Veterinary Medicine, RUDN University.

The team divided 360 fish into four groups and fed them dietary supplements with different concentrations of marjoram for eight weeks. A control group did not receive marjoram at all, while the other three got 100, 200, and 400 mg per 1 kg of body mass, respectively. After 60 days of the diet, 30 fish from each group were injected with the bacterial culture of Aeromonas hydrophila, one of the most dangerous pathogens for carps that breaks down hemoglobin, enters the organs of a fish body, and then begins to produce aerolysin, a toxic substance that causes cell death and tissue damage. Then, the team spent 10 days monitoring the survival rates of the infected fish.

Only 50% of the fish from the control group successfully overcame the infection, while the share of survivors among the fish that received marjoram was 80%. The group that received 200 mg of the supplement demonstrated the most prominent positive effect including a 1.5 times increase in erythrocyte count and hemoglobin, immunoglobulins, lysozyme, and alkaline phosphatase levels. This group also showed the lowest feed conversion rate, i.e. it required less food to gain 1 kg of weight (1.32 mg against 1.62 mg in the control group). According to the veterinarians, it indicated higher immune activity and better barrier functions of the mucus in the fish that received the marjoram supplement.

“The fish that received 200 mg/kg of marjoram demonstrated the highest survival rate. Our study confirms that marjoram extract is an effective dietary supplement for the common carp: it stimulates growth, the production of antioxidants, and the work of the immune system. All these factors helped the fish infected with Aeromonas hydrophila combat the disease,” added Morteza Yousefi from RUDN University.