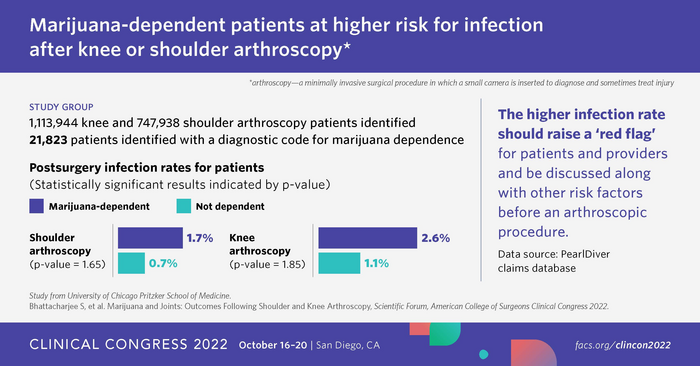 SAN DIEGO: Patients who are dependent on marijuana may face higher infection rates following knee and shoulder arthroscopy—a minimally invasive surgery in which a small camera is inserted to diagnose and sometimes treat injury—according to a study presented at the Scientific Forum of the American College of Surgeons (ACS) Clinical Congress 2022.

Using PearlDiver, a national insurance claims database, researchers from the University of Chicago performed a retrospective study of patients with marijuana dependence who underwent knee or shoulder arthroscopy for the postoperative complications of deep vein thrombosis (DVT), pulmonary embolism (PE), and infection.

“Marijuana has been gaining so much popularity, but it’s a risk factor we aren’t really catching,” said lead study author Sarah Bhattacharjee, MD, who conducted the research while she was a medical student at the University of Chicago. Dr. Bhattacharjee is now a surgical resident in orthopaedic and sports medicine at the University of Washington. “The higher infection rate found by this new study should raise a ‘red flag’ for patients and providers and should be discussed along with other risk factors before an arthroscopic procedure.”

Although the effect of marijuana use has been studied in pain management and cardiovascular health, few studies have looked at the potential effects of marijuana use by patients who are undergoing surgery. More states are legalizing marijuana, and the size of the cannabis market is predicted to reach $91.5 billion by 2028.1 Given that trend, the team of researchers from the University of Chicago set out to determine if marijuana-dependent users face an increased risk of complications following knee or shoulder arthroscopy.

“There’s so much information out there on smoking, alcohol, and other substances, but not on marijuana use,” said study coauthor Jason Strelzow, MD, assistant professor of orthopaedic surgery, University of Chicago. “As providers and surgeons, we should be discussing marijuana use with our patients, something that we have traditionally shied away from.”

All patients undergoing knee or shoulder arthroscopy were identified retrospectively in PearlDiver. Next, patients who had a diagnostic code for marijuana dependence were also identified within each surgery category; this is a rigid definition requiring patients to three or more criteria, such as using marijuana longer than intended, difficulty in cutting down use, spending a lot of time in obtaining or recovering from marijuana, and high tolerance.

The rates of DVT, PE, and infection within 90 days were assessed for all patients. Univariate analyses of marijuana dependence on all outcomes were performed, followed by a multivariate logistic regression analysis controlling for known patient comorbidities (other medical conditions).

(Note: The presenting author reported on updated data from the podium during the conference reflecting stable PE rates.)

Dr. Strelzow hopes surgeons will use the study results to help inform marijuana-dependent patients about risks, benefits, and available alternatives, such as reducing or eliminating marijuana use six months prior to an arthroscopic procedure.

Although the study focused on minimally invasive surgery, Dr. Strelzow said that “we would expect similar or larger effects with more open or invasive procedures.”

There are no author disclosures to report.

About the American College of Surgeons

The American College of Surgeons is a scientific and educational organization of surgeons that was founded in 1913 to raise the standards of surgical practice and improve the quality of care for all surgical patients. The College is dedicated to the ethical and competent practice of surgery. Its achievements have significantly influenced the course of scientific surgery in America and have established it as an important advocate for all surgical patients. The College has more than 84,000 members and is the largest organization of surgeons in the world. “FACS” designates a surgeon is a Fellow of the American College of Surgeons.