Malnutrition among a hunter-gatherer group

Why are key nutrients missing from their food environment? 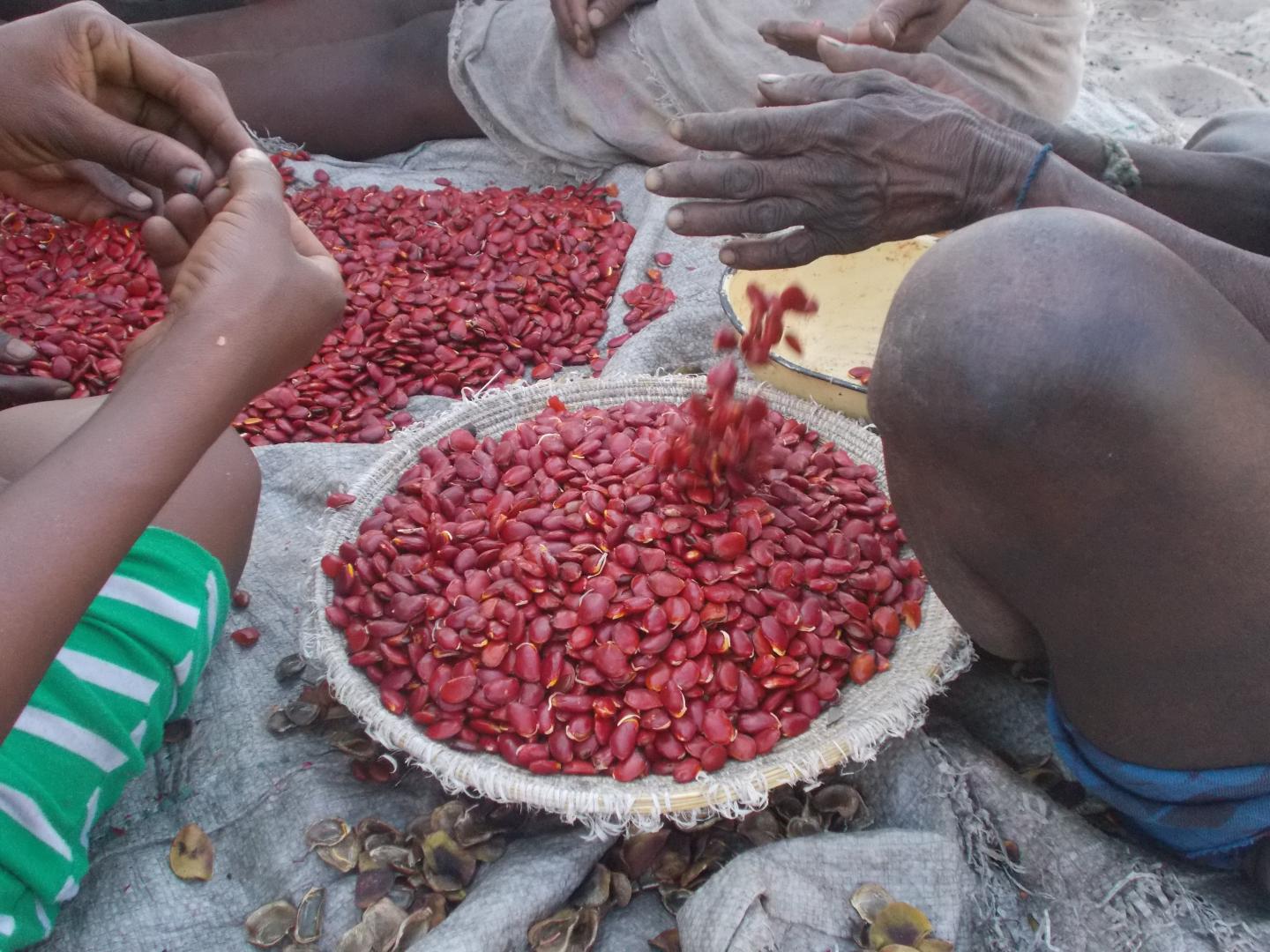 The diets of hunter-gatherers are changing at a fast pace, as in the contemporary world, they are increasingly being deprived of their access to land and natural resources and urged to adapt to sedentary lifestyle. An interdisciplinary study from the University of Helsinki brings forth the underlying causes of food and nutrition insecurity among a San group in Namibia.

The Khwe San tribe living in North-East Namibia, are still among the few so-called “bushman” groups, who reside on their ancestral land. However, their contemporary diet includes surprisingly little food from their surrounding environment, but mostly consists of maize meal transported from far away.

Why do the Khwe San, a former hunter-gatherer group living in woodland savannah surrounded by an abundance of wildlife and flora wait for the government to feed them maize? And why does food insecurity persist in these communities in the 21st century?

The doctoral research of Anita Heim, from the University of Helsinki sheds light in these questions and further by taking an interdisciplinary approach in exploring how the Khwe San navigate in their heavily transformed food environment, what do they eat and how they make their food choices.

Banned from hunting and restricted in gathering

The transitioning food system of a former hunter-gatherer group posed an interesting challenge for Heim to conceptualize and analyse food environment and food choices among the Khwe, as such studies in rural settings of low- and middle-income countries are extremely rare. The Khwe reside in a national park, where trophy hunting by foreigners are a common practice but the Khwe, who lived in the area for centuries, are banned of hunting and restricted in gathering. These conditions have contributed to a dietary transition, diverging from their traditional diets based on wild berries, tubers, mushrooms, insects and game meat. Yet, the transition did not follow the common pattern of a foraging society shifting into agricultural society.

– While prevailing developmental policies and practices have focused on agriculture as a pathway to achieve an increased food security, I discovered that the shift has hardly been successful, or meaningful in the fight against hunger. Therefore, the centralised food and financial assistance by the state has been indispensable for the Khwe communities, says Heim.

When hunger is a daily challenge

Today, the Khwe are trapped in a vicious cycle of malnutrition due to a dysfunctional local food system, in which they have no agency over food sources and are deprived of accessing their natural food resources on their traditional lands. These living conditions raise concerns regarding the United Nations Declaration on the Rights of Indigenous Peoples and the human right to food.

In the situation, where hunger is a daily challenge, according to Heim a wide range of context- and culture-specific solutions are necessary, including the elimination of movement restrictions, effective local food policies, nutritious food-aid and climate friendly agroecological production. Most importantly, in order to supplement the diets with key nutritional food groups, such as fruits, vegetables and meat, the support for traditional foodways is the most fundamental solution for a tribe with a strong hunter-gatherer mindset.

– Shockingly, this is a hugely untapped resource base for improving food security, as the regional stakeholders and decision makers show very little appreciation for foraged wild foods, says Heim.

The monetary income received from the government or earned as wages is spent in the informal markets, supplementing the diets with packaged foods, sugary sodas and alcohol.

The modern foods that provide convenience, enhanced taste and larger bulk have suppressed the appetite for traditional foods, at least among the younger generation. Yet Heim’s interviews with elderly revealed that the shift in preference away from traditional foods has been strongly influenced by historical events between the 1970-90s, when the easy reach for modern foods and the contested access to the surrounding natural resources made knowledge transfer about traditional food obsolete. Today, there is a serious risk of long-evolved Khwe knowledge around traditional foods disappearing as the Khwe elders pass away without having transmitted their knowledge and skills to the younger generations.