SAN DIEGO, March 22, 2022 — Devastating residential blazes and wildfires take a terrible toll in terms of deaths and injuries, as well as property loss. Today, researchers will report on a new type of coating that could limit the flammability of wood used in construction, potentially providing more time to escape fires and also curbing their spread. The environmentally friendly flame retardant could also be used for other flammable materials, such as textiles, polyurethane foam and 3D-printed parts. 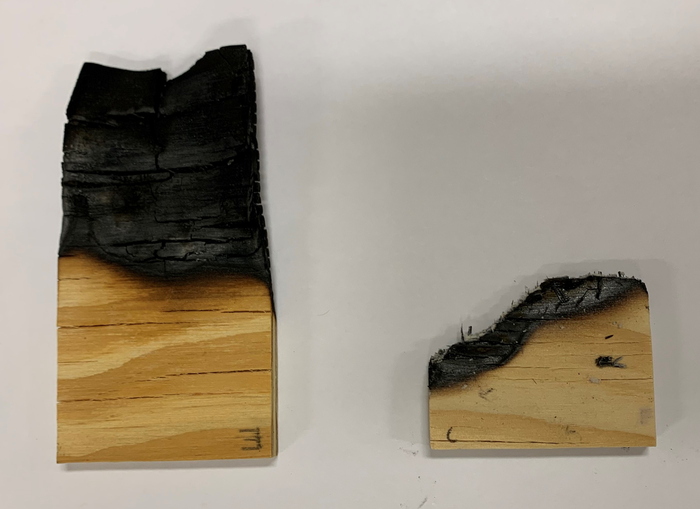 SAN DIEGO, March 22, 2022 — Devastating residential blazes and wildfires take a terrible toll in terms of deaths and injuries, as well as property loss. Today, researchers will report on a new type of coating that could limit the flammability of wood used in construction, potentially providing more time to escape fires and also curbing their spread. The environmentally friendly flame retardant could also be used for other flammable materials, such as textiles, polyurethane foam and 3D-printed parts.

The researchers will present their results today at the spring meeting of the American Chemical Society (ACS). ACS Spring 2022 is a hybrid meeting being held virtually and in-person March 20-24, with on-demand access available March 21-April 8. The meeting features more than 12,000 presentations on a wide range of science topics.

A video on the research is available at www.acs.org/firecoating.

Home fires account for the majority of fire deaths and lead to billions of dollars in property damage every year, according to the National Fire Protection Association. Adding fire sprinklers and smoke detectors can help, but another approach is to make construction materials less flammable. That’s the goal of Thomas Kolibaba, Ph.D., who is developing a new coating for these materials. “This type of treatment, which could be deposited via dipping, spraying or pressure treatment, could make homes much safer,” he says. “The coating could reduce flame spread and smoke production, which could limit damage and give people more time to evacuate.” Unlike most current fire retardant treatments, its ingredients are environmentally benign, and it might also cost less, notes Jaime Grunlan, Ph.D., the project’s principal investigator.

Kolibaba carried out the research as a graduate student and postdoc in Grunlan’s lab at Texas A&M University, building on polyelectrolyte coating technology invented by the group in 2009 and later extended by other researchers. Most of these coatings are formed by dipping fabric or other items in a solution containing one polymer with lots of positive charges on it, followed by a dip in another solution containing a polymer with lots of negative charges, and then repeating these steps to reach the desired thickness. The opposing charges draw the polyelectrolyte molecules in the alternating layers together into complexes on the item’s surface, forming a coating that can extinguish a flame.

Kolibaba wanted to extend this treatment to wood, but the multistep process wasn’t feasible for manufacturers because wood takes too long to soak up these chemicals. Through further research he adapted another Grunlan technique, thereby cutting the number of steps down to two: one dip to coat the wood, followed by a dip in a different solution to cure the coating by changing the pH. But that second solution kept turning into a sticky mess, so the streamlined process still wasn’t convenient for industrial or consumer applications.

In the latest modification, which will be presented at ACS Spring 2022, Kolibaba overcame that problem with a procedure that he says would be easy for industry or consumers to adopt. He dipped plywood in an aqueous solution containing the positively charged polymer polyethylenimine (PEI), the monomer hydroxyethyl methacrylate phosphate (HMP) and a photoinitiator known as TPO. Instead of dipping the wood in a second solution to cure, he exposed it to ultraviolet (UV) light for a few minutes. That caused TPO to turn the HMP into a negatively charged polymer, which then formed a polyelectrolyte complex with PEI. The resulting coating was transparent and only a few micrometers thick, so it didn’t change the wood’s appearance and added only slightly to its weight.

In lab flame tests, the treated wood lowered the amount of heat released during burning and quickly formed a surface layer of char that protected the underlying wood — features that could limit fire damage and spread. “It also reduced smoke production by 56%, an unusually large degree,” Kolibaba says. Unlike the team’s prior coatings, which are held together by ionic bonds, this one is covalently bonded. So Grunlan expects it to be water-resistant — and therefore durable — and possibly also water-repellent and antifungal.

Industrial users could coat construction materials, such as wooden studs and other framing, or oriented strand board (a type of engineered wood similar to particle board). Homeowners could use a backpack sprayer to protect existing structures such as fences or barns, which have been shown to propagate wildfires, Kolibaba says. Other potential applications include textiles and polyurethane foam for clothing, home furnishings, and the automotive and aviation sectors, Grunlan says. The UV-curable polyelectrolytes could also be used as a resin to make 3D-printed parts, which are flammable when made with conventional resins, Kolibaba adds. That could be particularly beneficial in aerospace settings, such as the International Space Station, he notes.

The researchers acknowledge support and funding from Texas A&M.

A recorded media briefing on this topic will be posted Tuesday, March 22, by 10 a.m. Eastern time at www.acs.org/acsspring2022briefings.

ACS Spring 2022 will be a vaccination-required and mask-recommended event for all attendees, exhibitors, vendors, and ACS staff who plan to participate in-person in San Diego, CA. For detailed information about the requirement and all ACS safety measures, please visit the ACS website.

The American Chemical Society (ACS) is a nonprofit organization chartered by the U.S. Congress. ACS’ mission is to advance the broader chemistry enterprise and its practitioners for the benefit of Earth and all its people. The Society is a global leader in promoting excellence in science education and providing access to chemistry-related information and research through its multiple research solutions, peer-reviewed journals, scientific conferences, eBooks and weekly news periodical Chemical & Engineering News. ACS journals are among the most cited, most trusted and most read within the scientific literature; however, ACS itself does not conduct chemical research. As a leader in scientific information solutions, its CAS division partners with global innovators to accelerate breakthroughs by curating, connecting and analyzing the world’s scientific knowledge. ACS’ main offices are in Washington, D.C., and Columbus, Ohio.

Abstract
Home structure fires account for the vast majority of fire deaths and lead to billions of dollars in property damage every year. Wood is a key constituent in home construction, but lacks rigid fire standards. Intumescent polyelectrolyte complex (PEC) nanocoatings have yielded remarkable fire protection on other cellulosic materials, such as textiles, but the processing demands of these techniques limit their practical application in highly porous materials such as wood, where slow diffusion limits the rate of coating deposition. In this work, a novel method of depositing PECs is employed. A cationic polymer and anionic monomer are deposited onto plywood with a photoinitiator, and the PEC is formed by subsequent irradiation of the wood surface with ultraviolet light. This photopolymer coating imparts significant fire resistance with minimal added weight. Additionally, this treatment preserves the mechanical strength of wood at elevated temperatures. The utility of this new type of PEC treatment holds significant promise to make home construction much safer.