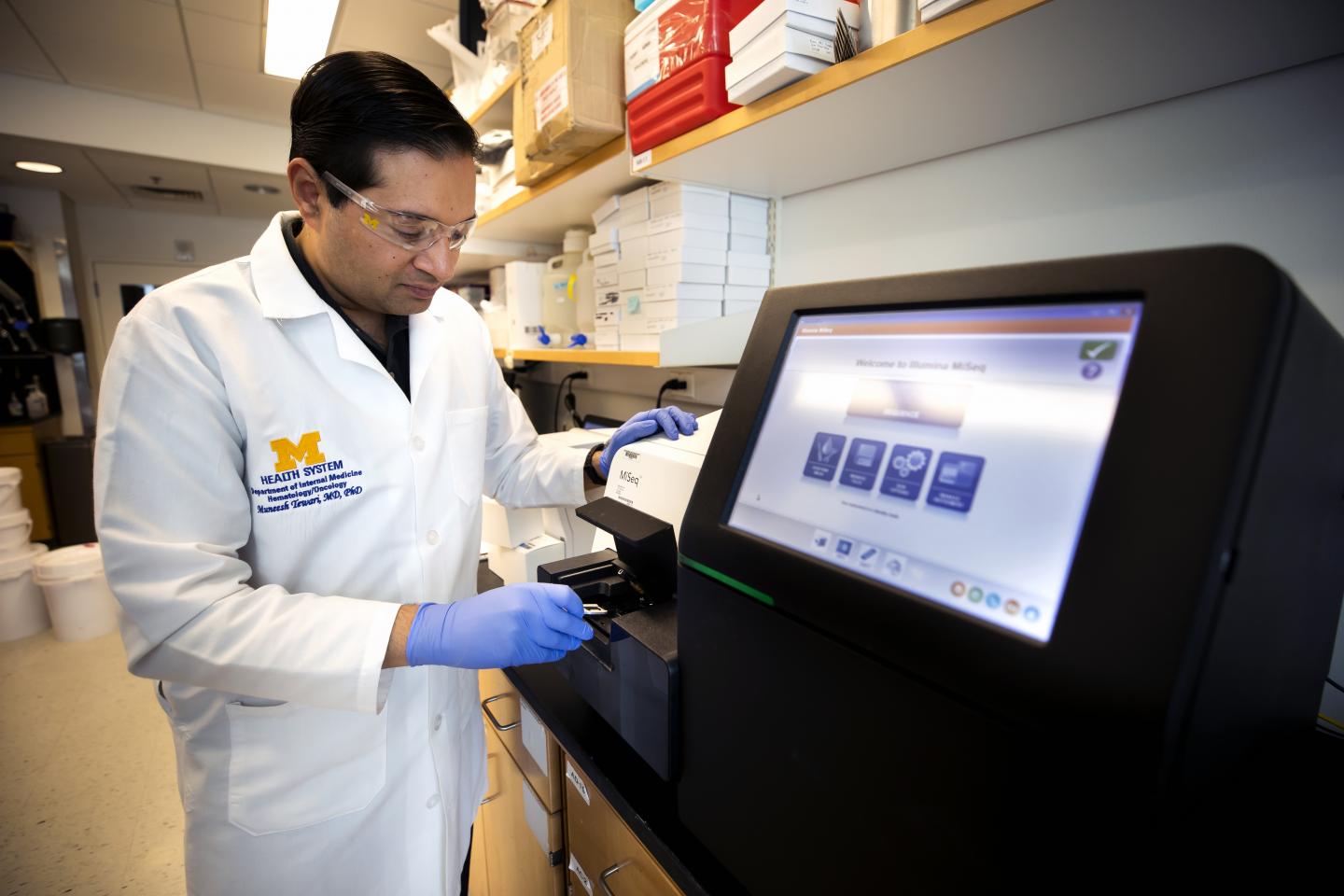 ANN ARBOR, Michigan — Advancing technology is allowing scientists increasingly to search for tiny signs of cancer and other health issues in samples of patients’ blood and urine. These “liquid biopsies” are less invasive than a traditional biopsy, and can provide information about what’s happening throughout the body instead of just at a single site.

Now researchers at the University of Michigan Rogel Cancer Center have developed a new method for lifting the genetic fingerprints of tiny fragments of RNA found in blood plasma that are invisible to traditional methods of RNA sequencing.

These messenger RNAs and long non-coding RNAs can provide important clues about the activity of genes throughout the body — including genes that are active in particular organs or that are associated with certain diseases, like cancer — and thus could serve as potential biomarkers for a host of conditions.

“We believe that there are a wide variety of potential clinical applications,” says Muneesh Tewari, M.D., Ph.D., professor of internal medicine at the U-M Medical School, and of biomedical engineering, a joint department of the Medical School and College of Engineering. “For example, in cancer, we’re excited about applying this approach to try to detect the earliest signs of autoimmune side-effects from immunotherapies. There’s also the potential for early detection of cancer because there are long non-coding RNAs that are fairly specific to certain cancer types.”

Tewari is the senior author of a study published May 3 in the EMBO Journal that describes the new method and demonstrates its effectiveness in a study of bone marrow transplant patients.

From idea to proof-of-concept

The research — which was led by postdoctoral fellows Maria Giraldez, M.D., Ph.D., now a faculty member at the Institute of Biomedicine of Seville in Spain, and Ryan Spengler, Ph.D. — is the culmination of more than a decade of work.

In 2008, Tewari, who was then at the Fred Hutchinson Cancer Research Center in Seattle, Washington, and his colleagues published a paper describing a breakthrough for detecting microRNAs from tumors in blood plasma.

The method’s shortcoming, however, was that it wasn’t able to detect more prevalent and organ-specific types of RNA, which are often found in fragmentary form.

“The real innovation in this new study was recognizing that these other types of RNA were being missed because they had simple but critical differences that prevented them from showing up in the blood plasma sequencing results,” Tewari explains. “We used an enzyme to tailor the ends of these fragments so they would show up in the sequencing. And that relatively simple step revealed that, yes, there are thousands of these additional gene transcripts in the bloodstream.”

The second critical piece of the puzzle was developing a method for reliably sorting through the flood of sequencing data to filter out false positives and ensure an accurate result — what the scientists call a “high-stringency bioinformatic analysis pipeline.”

“We had to figure out how to separate signal from noise — how to remove bits of irrelevant genetic material from bacterial and viral RNAs as well as from our own genome, which add noise to the data,” says Spengler, who led the data analysis. “When the sequences are really short, they can match to multiple places in the human genome by chance and it’s difficult to say which gene they’re really coming from.”

The new method, called phospho-RNA-seq because of the way the fragment ends are tailored, was first validated in experiments using a curated pool of RNA — so the scientists knew ahead of time what accurate results should look like. Then, to demonstrate that it could work in a real-world setting, the method was tested on plasma samples collected weekly from two patients who underwent bone marrow transplants at U-M.

“We could track the markers of the reconstitution of their bone marrow after the transplant, as well as changes in the blood plasma RNA that indicated injury to the liver — which lined up with what we knew was happening from their medical records,” Tewari says.

A new tool for clinicians and researchers

“On the basic science side, now that we know there are thousands of these RNAs floating around in the bloodstream, it raises questions about why they’re there and what function they may have,” he says. “But the more immediate application is that we are now better able to read the human transcriptome — the activity of genes throughout the body — in plasma samples, which can give us new information about states of health and disease.

“I look at this as proof-of-concept research, but I expect that as we continue to refine the technology and make it even more accessible for other researchers, it’s likely to be applied to many different disease areas and body systems,” Tewari adds.

Tewari also stresses the collaborative and cross-disciplinary nature of the work, which required laboratory, computational and clinical expertise.

“This is exactly why I came to Michigan,” he says, “to be able to do bench research that reaches into the clinic through exciting collaborations across medical specialties and scientific disciplines.”

Novel thermoelectric nanoantenna design for use in solar energy harvesting

Bacteria use their enemy — phage — for ‘self-recognition’

Scienmag Apr 22, 2019
Credit: WANG Xiaoxue Cells are social, and self-recognition is a critical aspect of group behavior as cells assist…

All is FAIR in biodiversity research: Mandatory data audit at…