Projections of future extreme precipitation change can be made more reliable by using a constraint from observed present-day precipitation variability, which reduces the uncertainties in projections by 20-40% over the mid-to-high latitudes, according to a joint study by the Institute of Atmospheric Physics (IAP) of the Chinese Academy of Sciences (CAS) and the Met Office, the UK’s national meteorological service. 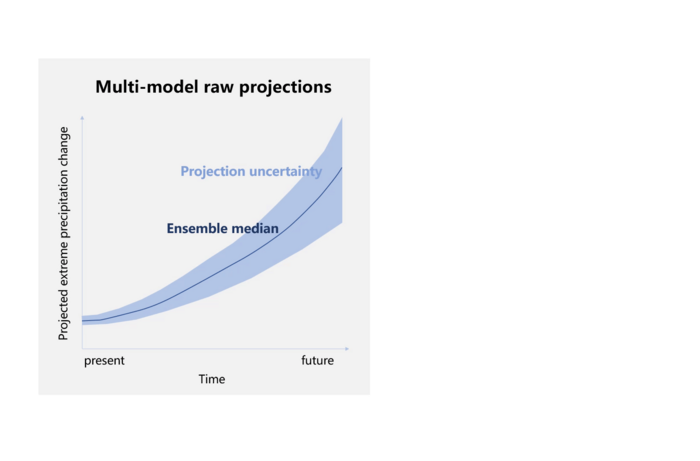 Projections of future extreme precipitation change can be made more reliable by using a constraint from observed present-day precipitation variability, which reduces the uncertainties in projections by 20-40% over the mid-to-high latitudes, according to a joint study by the Institute of Atmospheric Physics (IAP) of the Chinese Academy of Sciences (CAS) and the Met Office, the UK’s national meteorological service.

This study was published in Nature Communications on 3rd November.

The world continues to be surprised by record-shattering precipitation extremes, including the Europe and China floods of 2021 and the more recent Pakistan flood of 2022, that have caused havoc on the society and economy. How much worse will it be in the future as global warming intensifies? Countries need reliable climate projections to prepare themselves. However, current state-of-the-art climate models, despite all agreeing on a future intensification, still show large uncertainties in the magnitude of changes in extreme precipitation – the so-called “projection uncertainty”. This poses a grand challenge for climate action and adaptation planning.

To tackle this issue, two major challenges remain to be solved, including identifying the sources of projection uncertainty, and finding effective methods to constrain such uncertainty.

Using multi-model ensemble simulations, this study finds that the disagreement between extreme precipitation projections from different models is significantly related to the models’ representations of present-day precipitation variability (i.e., the range that precipitation events vary in time). An emergent relationship can thus be established – specifically, climate models that simulate weaker present-day precipitation variability tend to project larger increases in extreme precipitation occurrences under a given global warming increment. This emergent relationship holds significantly in many regions around the world particularly in the mid-to-high latitudes.

“We justified this emergent relationship statistically and theoretically using idealized distributions for precipitation. This statistical argument not only provides insights into understanding the projection uncertainty, but also enhances the credibility of the constraint,” said Wenxia Zhang, associate professor at IAP and lead author of the study.

“Using this emergent constraint, combined with observed precipitation variability, we can provide an effective way of constraining extreme precipitation projections,” said Kalli Furtado, Expert Scientist at the Met Office and second author of the study. “It not only reduces the projection uncertainty by 20-40% regionally, but also corrects the best estimate of future changes. For example, the constraint suggests that future increases in extreme precipitation may be greater than previously projected in Northern Asia, but may be less than previously projected in Europe.”

“Previous investigations have developed methods to constrain projections in the context of global or tropical average extreme precipitation. However, climate adaptation activities need reliable regional information of projection. An important merit of this emergent constraint is that it holds at regional scales, and thus can be applied to different regions to make regional extreme precipitation projections more reliable,” said Tianjun Zhou, corresponding author of the study, a senior scientist at IAP and professor at the University of Chinese Academy of Sciences. “This is expected to provide actionable climate science to greatly benefit regional adaptation planning, ranging from agriculture planning and food security to flood-control systems and public safety, among many other sectors.”