Major climate benefits when ships “fly” over the surface

Soon, electric passenger ferries skimming above the surface across the seas may become a reality. At Chalmers University of Technology, Sweden, a research team has created a unique method for further developing hydrofoils that can significantly increase the range of electric vessels and reduce the fuel consumption of fossil-powered ships by 80 per cent. 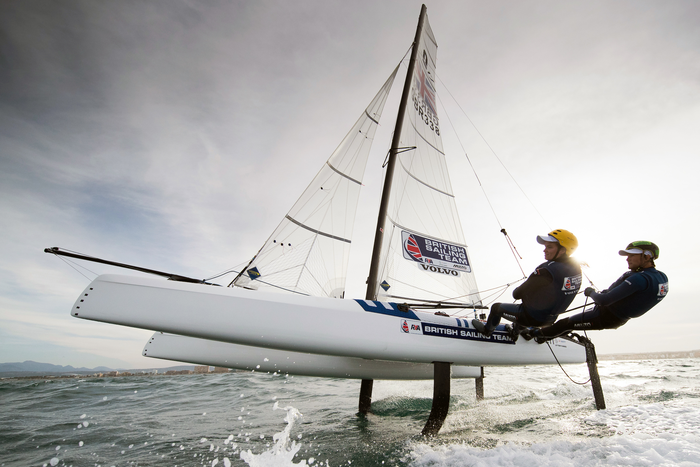 Soon, electric passenger ferries skimming above the surface across the seas may become a reality. At Chalmers University of Technology, Sweden, a research team has created a unique method for further developing hydrofoils that can significantly increase the range of electric vessels and reduce the fuel consumption of fossil-powered ships by 80 per cent.

While the electrification of cars is well advanced, the world’s passenger ferries are still powered almost exclusively by fossil fuels. The limiting factor is battery capacity, which is not enough to power ships and ferries across longer distances. But now researchers at Chalmers and the marine research facility SSPA have succeeded in developing a method that can make the shipping industry significantly greener in the future. The focus is on hydrofoils that, like wings, lift the boat’s hull above the surface of the water and allow the boat to travel with considerably less water resistance. A technology that in recent years has revolutionised sailing, by which hydrofoils make elite sailors’ boats fly over the surface of the water at a very high speed.
The researchers at Chalmers and SSPA now want to enable the sailboats’ hydrofoil principle to be used on larger passenger ferries as well, resulting in major benefits for the climate.

“The electrification of ferries cannot be done without drastically reducing their water resistance. This method will allow the development of new foil designs that can reduce resistance by up to 80 per cent, which in turn would significantly increase the range of a battery powered ship. In this way, we could also use electric ferries on longer distances in the future,” says research leader Arash Eslamdoost, Associate Professor in Applied Hydrodynamics at Chalmers and author of the study Fluid-Structure Interaction of a Foiling Craft published in the Journal of Marine Science and Engineering.

Even for ships that today run on fossil fuels the climate benefit could be  significant, as similar hydrofoil technology could reduce fuel consumption by no less than 80 per cent.

Unique measurement method arouses broad interest
At the centre of the research project is a unique measurement technique that the researchers have put together in order to understand in detail how hydrofoils behave in the water when, for example, the load or speed increases or the positioning of the hydrofoil changes. Using the data collected from the experiments, the team has developed and validated a method to simulate and predict with great precision how the hydrofoil would behave under a variety of conditions. The method is unique of its kind and can now be used to develop the design of hydrofoils for electric powered hydrofoil ferries.

The study was conducted in collaboration with the research facility SSPA – one of only a few of its kind in the world – where Laura Marimon Giovannetti works as a researcher and project manager. She is the lead author of the study and has herself competed at the elite level for both the British and Italian national sailing teams. Today she is a research and development adviser to Sweden’s Olympic committee and the Swedish national team with her sights set on helping the team win more medals at the Olympics in 2024. Marimon Giovannetti sees many possibilities for the unique measurement method developed by the team:

“At the Americas Cup in San Francisco Bay in 2013, it was the first time we saw a 72-foot sailing boat learning how to “fly” using hydrofoils during the competition. And since then, we’ve seen a huge increase in sailing boats with hydrofoils. With this new method and knowledge we are able to bring together a range of different branches of engineering – naval architecture, advanced materials and aeronautics as well as renewable energy.”

Paving the way for hydrofoils on electric ferries
Hydrofoil technology is not in itself a novelty, but was developed as early as the 60s and 70s. Back then the focus was on getting boats to travel at as fast as possible and the hydrofoils were made of steel, a heavy material with higher maintenance costs. Today’s modern hydrofoils are made of carbon fibre, a much lighter and stiffer material that can maintain its rigidity even under high loads – and can be tailored to the expected loads. Part of the research project was therefore to fully understand how a carbon fibre structure behaves underwater during different operational conditions. The research team’s method developed in association with modern technology is now paving the way for the use of carbon fibre hydrofoils on larger passenger ships that can travel in a safe, controlled and climate-friendly way even at low speeds.

“You want the foil to be as efficient as possible, which means carrying as much weight as possible at as low a speed as possible with the least resistance. Our next goal is to use this method when designing more efficient hydrofoils for ferries in the future,” says Eslamdoost.

More about the scientific article

Journal of Marine Science and Engineering

Fluid-Structure Interaction of a Foiling Craft

The authors declare no conflict of interest. The funding bodies had no role in the design of the study; in the collection, analyses, or interpretation of data; in the writing of the manuscript, or in the decision to publish the results.