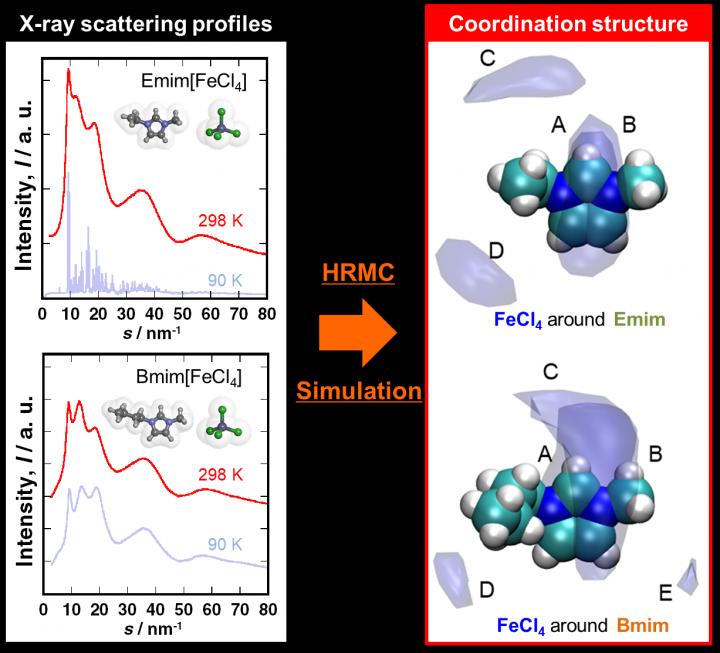 A research team lead by Ryusuke Futamura of Shinshu University investigated the response of magnetic ionic liquids (MIL) to magnetic fields from the microscopic view points. Magnetic fluids, which can respond to magnetic fields, can be made by dispersing ferromagnetic nanoparticles in a solvent. Some pure liquids that are not mixtures also respond to magnetic feilds. For example, oxygen is a liquid around -200°C and is attracted to magnets. In this study, pure magnetic ionic liquids Emim[FeCl4] and Bmim[FeCl4] were examined in the microscopic scale. These liquids are attracted to magnets at room temperature, but the former also undergo a change from paramagnetic to antiferromagnetic behavior at 3.8K.

Ferromagnetism is found in the objects which we think of as “magnets”, such as refrigerator magnets. Magnetic atoms or ions have magnetic dipoles (north and south) in the molecular scale that interact with each other and show ferro- or antiferro-magnetism over a long distance in their crystal structures. Bmim[FeCl4] does not crystalize even at low temperatures, and are amorphous, or formless. It was shown in this study that even in this amorphous state, there is structurality in the short range and several magnetic ions form an aligned association structure. This is thought to be the reason for the negative Curie-Weiss temperature, which can be observed as a macroscopic physical property.

It was difficult to investigate and understand the formation of the liquid structure of Emim[FeCl4] and Bmim[FeCl4]. Liquids and amorphous objects do not have a long-range ordered structure, which means structural analysis of such materials are performed through X-ray scattering measurements followed by radial distribution analysis. However, MILs are binary systems consisting of cations and anions. This makes examination by ordinary radial distribution analysis difficult. This is where the hybrid reverse Monte Carlo (HRMC) method helped. It combined the X-ray scattering measurement with molecular simulation to clearly demonstrate the precise coordination structures of the two MIL. This has made it possible to discuss the cation-cation, anion-anion, and cation-anion of the liquid structure.

By the use of spatial distribution function analysis, it has become possible to visualize the ion coordination structure. The temperature dependence of the spatial distribution function showing the coordination structure of the anions around the cations in the MIL can be seen that the lower the temperature, the wider the coordination sphere and more blurred the site. The researchers were able to clarify the characteristics of substances that appear in macroscopic physical properties from a microscopic perspective.