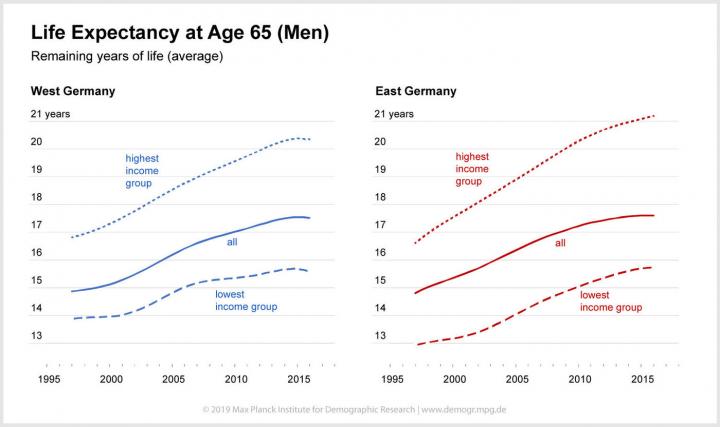 Income and social status have an increasing effect on life expectancy in Germany. On average, men with very low retirement pay die five years earlier than those who are much better off. Poverty shortens life. According to a study by researchers at the Max Planck Institute for Demographic Research, this correlation is also very clear for Germany. Their analysis shows that the gap between rich and poor in life expectancy has grown significantly over the past 20 years. And there are still differences between East and West.

Life expectancy of poor and rich people is diverging more and more in Germany. This can clearly be seen from pension entitlements and expected lifespan of older men. 65-year old men with very high retirement benefits can expect on average to live for another 19 years, while men in the lowest of five income groups will on average not live to see their 80th birthday. These men had only 15 years of life left at age 65, which is four years less than for the rich. In 1997 this gap was only three years, but by 2016 it had widened to more than five years.

This is the result of a new study by the Max Planck Institute for Demographic Research (MPIDR) that has been published by MPIDR scientists Georg Wenau, Pavel Grigoriev and Vladimir Shkolnikov in the Journal of Epidemiology & Community Health.

Using data from the German Pension Fund the researchers showed how much the gap in mean life expectancy for retired men in Germany has increased during the last 20 years.

“Especially for men at the bottom of social and economic hierarchy life expectancy at age 65 rose markedly slower during the more recent years. In West Germany it almost stopped increasing altogether since 2007,” says Georg Wenau, the main author of the study.

Lifespan rises much quicker for the rich than for the poor

While life expectancy has been rising for all income levels, it increased by only 1.8 years in the lowest income group in West Germany from 1997 to 2016 and the highest income group gained almost twice as many years of life. During the same period in East Germany, gains for those in the highest benefit group were 4.7 years, versus the increase of only three years in the lowest group.

The biggest setbacks occurred in East Germany in the aftermath of the German reunification. Here the socioeconomic composition of the population in retirement changed dramatically. The share of men falling into the lowest status group almost doubled from 2005 to 2016.

For their study the scientists used data from the national German Pension Fund because it provides information about the remaining years of life after retirement, and also on the pension entitlement points, which determine the pension payment.

These pension entitlements were interpreted as a sort of lifetime earnings which reflects the social and economic status of a person within society.

Despite their high relevance, studies on life expectancy and social criteria are rare for Germany since it is complicated to analyze the data of the public German Pension Fund. The new MPIDR study is the first to calculate such extensive values over the course of time.

The five income groups were divided not by income per se, but by pension entitlement at the beginning of retirement. While the share of pensioners per group changed little over time in West Germany, the low-income group grew considerably in East Germany, from one fifth of all pensioners in 2005 to 36 percent in 2016.

After German reunification many men approaching retirement age could gather only few additional pension entitlement points, as they had been unemployed long-term or took up low-paid jobs during the last years of their working life.

“East German men aged 65 and over lose one potential year of life that they would have gained if the population’s socioeconomic structure had not changed,” says MPIDR researcher Georg Wenau. This is due to the small growth of life expectancy in the low-income group, but also because of the increased number of people this group now contains.

“The setback of the lowest income group in East Germany can largely be interpreted as a ‘shock of the German reunification’,” says Wenau. Even if the socioeconomic situation worsened only rather late in life this could considerably impact life expectancy, conclude Wenau and his colleagues.

However, Wenau emphasizes, small pension payments do not only mean little wealth after retirement, “They also mean an irregular working life history with periods of badly paid jobs and unemployment.”

If the pension payments for a given entitlement were increased, this would make everyone wealthier in old age, but it would not take away the health burden of past personal histories of joblessness and low wages that still shorten the lives of those in the low status groups.

Occupational groups such as self-employed people and government officials, for which the pension entitlements with the public German Pension Fund did not appropriately mirror wealth and social status in old age, were excluded from the study.

Only men were included in the study, as women had a comparatively smaller labor market participation, and women’s low pension payments were often compensated by a relatively higher income of the entire household.

New method may transport medicine better through the body

Warmer and acidified oceans can lead to ‘hidden’ changes…

WVU astronomers help detect the most massive neutron star ever…