LOUISVILLE, Ky. – For nearly three decades, John Pierce Wise Sr. has investigated the connection between exposure to metals and cancer, working both in the lab and in the field, reporting significant discoveries about the effects of metals on chromosomes in lung cancer and how those effects differ in humans and in whales. 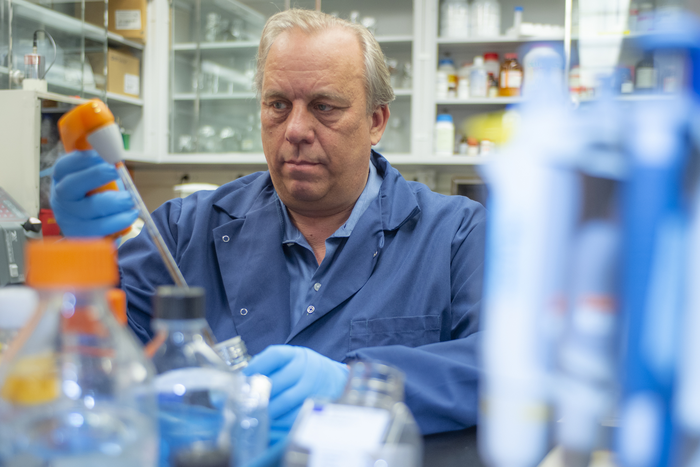 LOUISVILLE, Ky. – For nearly three decades, John Pierce Wise Sr. has investigated the connection between exposure to metals and cancer, working both in the lab and in the field, reporting significant discoveries about the effects of metals on chromosomes in lung cancer and how those effects differ in humans and in whales.

Wise, professor in the University of Louisville’s Department of Pharmacology and Toxicology, now has received $6.7 million over eight years from the National Institute of Environmental Health Sciences through the Revolutionizing Innovative, Visionary Environmental health Research (RIVER) program to investigate how chromosome instability resulting from exposure to metals leads to lung cancer.

Lung cancer is the leading cause of cancer death in the U.S., and Kentucky has the highest rates of lung cancer incidence and mortality of any state. Despite the widely held perception that lung cancer is simply attributed to smoking, 1 in 5 women and 1 in 12 men who develop lung cancer never smoked. In addition to high rates of cancer, lung cancer has a five-year survival rate of 21%, one of the lowest of any cancer site.

“Lung cancer has a substantial impact on human health, particularly here in Kentucky, and it is time the misconception that smoking is the only cause of lung cancer is dispelled,” said UofL interim president Lori Stewart Gonzalez. “We are grateful for the institute’s confidence in Dr. Wise and our university to lead this work in addressing such a significant health concern. I am excited to see this amazing research continue and expand at UofL thanks to this grant.”

Metals are some of the top environmental causes of human lung cancer, but scientists do not fully understand how the metals cause cancer. Wise’s research has shown that one such metal, hexavalent chromium, causes chromosome instability, in which the chromosomes are increased, deleted or rearranged in inappropriate ways. This chromosome instability can lead to the development of cancer.

“What’s thought to underlie that is a double-strand break in the DNA helix. In human and whale cells, chromium induces the same number of breaks, so you would expect the same amount of effect on the chromosomes, but you don’t see that,” Wise said. “One of the things we’ve found is that chromium also inhibits the repair of these breaks in humans – you get the breaks and you can’t fix them. In whale cells you get the breaks, but you can fix them. What about whales is protective or corrective? That’s what we’re digging into.”

Wise has assembled a team of researchers from around the world to investigate this process further with the hope that this knowledge ultimately will lead to ways of preventing and reversing metals-induced lung cancer in people.

The research will include laboratory studies and then translate those findings to wildlife and human populations of workers exposed to metals. In addition to Wise, project researchers include KeJian Liu of the University of New Mexico, who will lead lab studies and Tongzhang Zeng of Brown University, who will lead work with human populations. Doctoral students in Wise’s lab and UofL faculty members Sandra Wise, Michael Merchant and Matt Cave also will participate, along with additional researchers in the U.S., Germany, China and Japan.

“UofL is one of the top institutions in the country in research and discovery for how human health is influenced by our environment, and preeminent researchers like Dr. Wise are the reason,” said Kevin Gardner, UofL executive vice president of research and innovation. “This grant is recognition of the incredible contributions Dr. Wise has made to the field and provides ongoing support for continued discovery for years to come.”

RIVER grants are awarded to select investigators who have shown a broad vision and potential for impactful research. They allow the investigator increased flexibility and the freedom to set specific research goals toward a given objective, adjusting the research based on new findings, without seeking new funding. Cave received a RIVER grant in 2017 to conduct research into the effects of environmental exposures on fatty liver disease.

EDITOR’S NOTE: Additional photos of Wise and his lab work and field expeditions are available here. Information about the photos is as follows:

During marine research expeditions, Wise and his team seek out whales aboard a sailboat, using a crossbow to shoot a small dart into the whales’ skin from the vessel to obtain thimble-sized tissue biopsies of skin and blubber without disrupting the animals’ activity.