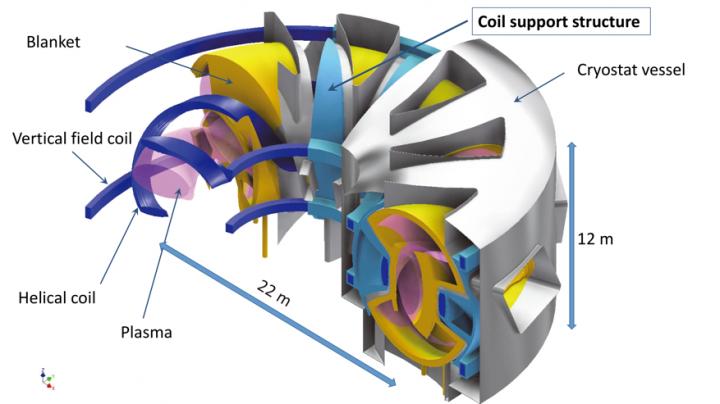 The group of associate professor Hitoshi Tamura and others of the National Institute of Natural Sciences (NINS) National Institute for Fusion Science (NIFS) first applied topology optimization technique to the concept design of a helical fusion reactor which aims to demonstrate power generation. The group successfully achieved a weight reduction of about 2,000 tons of the support structure surrounding helically twisted coils while maintaining the strength of the structure.

So far, the weight of the coil support structure of the helical fusion reactor has been estimated to be 20 times heavier than that of the Large Helical Device (LHD) and 1.6 times that of the International Thermonuclear Experimental Reactor (ITER). In addition, since the superconducting coils are operated at cryogenic conditions (below minus 260 degrees Celsius), the heavy and solid coil support structure also needs to be cooled to the same temperature as the coils to maintain the coils in the superconducting state. Reducing an amount of materials is an extremely important issue from the viewpoints of cost and power consumption. It is strongly desired to reduce the total weight of the coil support structure as much as possible while maintaining the role of sustaining the coil. To solve this issue, the research group applied the “topology optimization method” to the design of the coil support structure. Topology optimization is an analytical method to reduce the volume of the structure by removing the part that does not affect the strength. It is equivalent to searching for the optimum shape from various combinations including the change of the topology. This method has the potential to create shapes that cannot be imagined based on conventional designs. Since it is extremely effective in reducing the weight and cost such as automobile parts, it has developed rapidly in recent years. However, there has been no example of application of the topology optimization to overall design of a component in the fusion reactor.

The research group applied the topology optimization method for the first time to the overall design of the structure in a huge and complicated fusion reactor to reduce its weight. The stress force acting in the structure determines the strength of the structure. If the stress is larger than the acceptable level of the component material, the structure will start breaking. Structural optimization should be done so that the stress does not exceed acceptable levels by reducing weight. The research group analyzed in detail what level of stress and deformation would act on the coil support structure due to the electromagnetic force acting on the coil. Then, topology optimization was applied to the model. In topology optimization, the model is divided into many small regions and the degree of influence on the overall strength when a certain region is removed is calculated. Finally, a set of regions that can be removed without any influence is determined. In this way, the optimum shape that does not affect the overall strength and has reduced weight was found. Consequently, the weight of the coil support structure was successfully reduced by about 25% from 7,800 tons.

A new antibiotic binding site was found in the ribosome