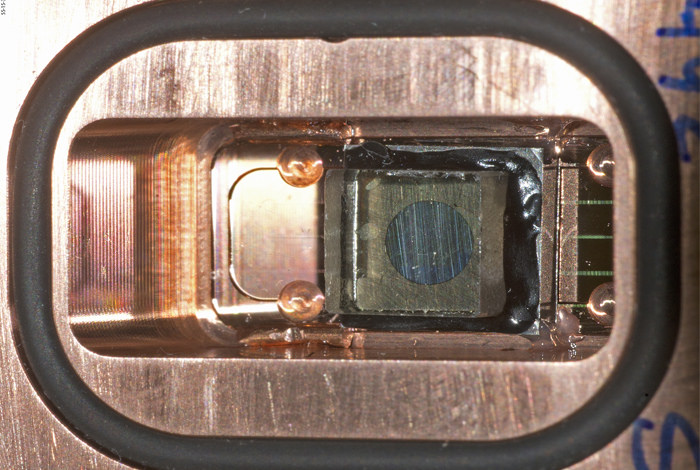 New Mexico labs go where no one has gone before

“With Z we have very carefully reached pressure, temperature and density regimes that are relevant to those seen during a nuclear weapon detonation,” said Russell Olson, a Dynamic Material Properties project leader at Los Alamos National Laboratory. “Z is used to induce ‘shockless’ magnetic compression that allows us to put plutonium into conditions not available with any other driver. No one has ever made controlled measurements on plutonium under these conditions before, so the excitement level is very high.”

With tiny, thin disks of plutonium — eight to 12 millimeters in diameter and 1/10th to 1/2 of a millimeter thick — housed in a target assembly, scientists and engineers from Los Alamos and Sandia direct immense electrical energy onto the target with the Z Machine. This hugely energetic pulsed power device creates a uniform, very fast magnetic pressure wave that compresses the plutonium sample, causing its phase to change, essentially reordering its atomic structure.

“In this collaborative Los Alamos-Sandia material science experiment, we’re determining the fundamental properties of a tiny amount of plutonium placed under tremendous pressure,” said Sandia pulsed-power sciences director Keith Matzen. “The containment system used inside Z has been carefully designed, engineered, and repeatedly tested to totally isolate the plutonium from personnel and the rest of the Z facility.”

“To say plutonium is a complex material is a gross understatement, especially when one considers various alloys,” said Olson. “This is an element that possesses multiple solid phases and a liquid phase so we’re trying to understand where these phase transitions occur in dynamic settings to develop a phase diagram that describes where the phase boundaries are in terms of pressure, temperature and density.”

These experiments both improve the fundamental understanding of how plutonium behaves in a dynamic environment, and how that dynamic performance might change with age, sometimes looking at new material and comparing it against older material from the stockpile. A more complete phase diagram is immensely important to nuclear weapons designers who need to not only understand if a nuclear weapon will perform as designed, but also how it will be affected by aging.

The experiments support the Stockpile Stewardship Program, begun in 1995 to assure the safety, security and effectiveness of the U.S. nuclear deterrent without the need for full-scale nuclear testing.

Los Alamos and Sandia have been collaborating on Z plutonium experiments since 2006, conducting three or four experiments a year since 2010. The latest experiments have become possible through learning from previous experiments and technological advancements to the Z Machine, the target assemblies, and the Los Alamos produced plutonium samples.

“It’s a true collaboration,” said Olson, “using the resources of the entire national nuclear security enterprise to get the right data for the right reasons, with both Los Alamos and Sandia sharing the same goal.”