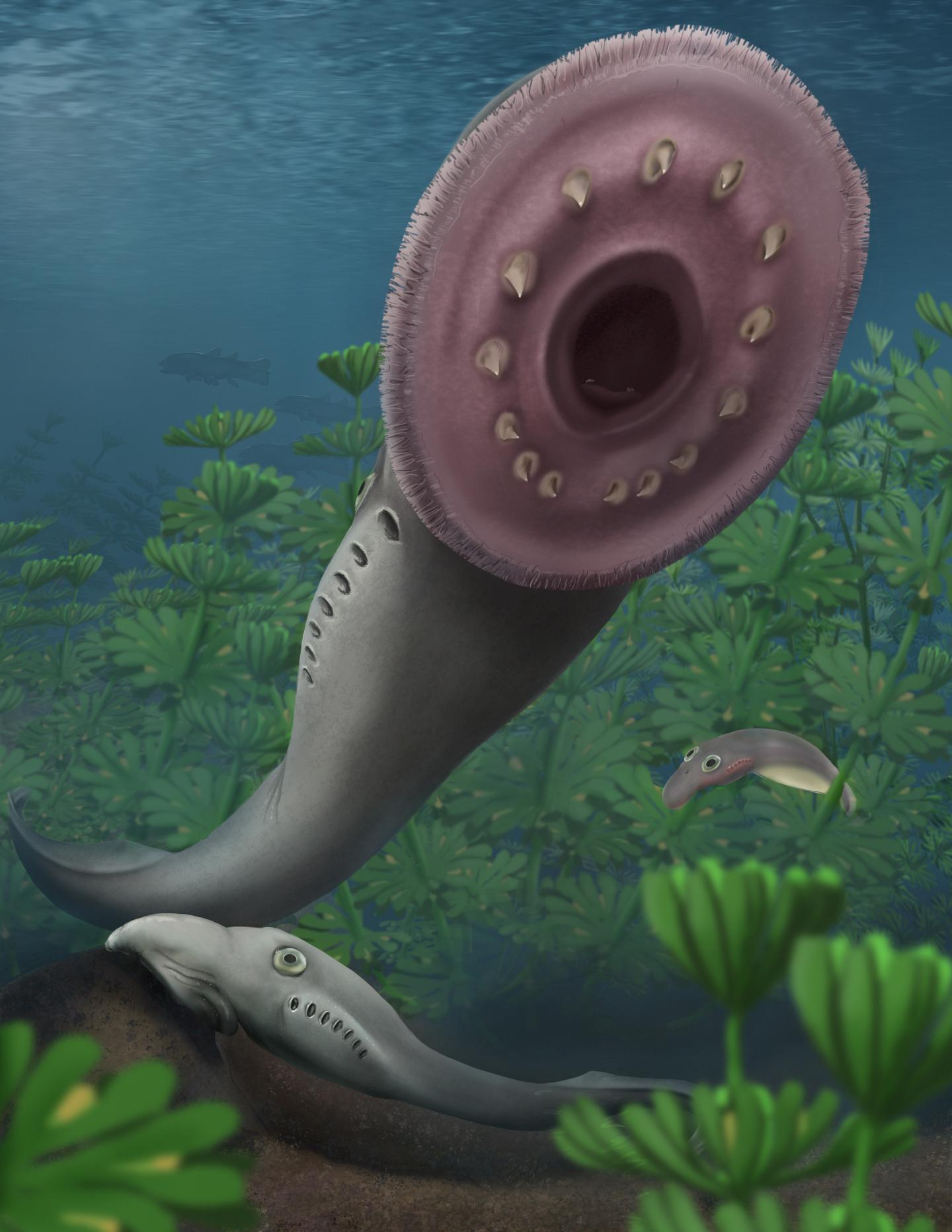 A new study out of the University of Chicago, the Canadian Museum of Nature and the Albany Museum challenges a long-held hypothesis that the blind, filter-feeding larvae of modern lampreys are a holdover from the distant past, resembling the ancestors of all living vertebrates, including ourselves. The new fossil discoveries indicate that ancient lamprey hatchlings more closely resembled modern adult lampreys, and were completely unlike their modern larvae counterparts. The results were published on March 10 in Nature.

Lampreys — unusual jawless, eel-like, creatures — have long provided insights into vertebrate evolution, said first author Tetsuto Miyashita, PhD, formerly a Chicago Fellow at the University of Chicago and now a paleontologist at the Canadian Museum of Nature. “Lampreys have a preposterous life cycle,” he said. “Once hatched, the larvae bury themselves in the riverbed and filter feed before eventually metamorphosing into blood-sucking adults. They’re so different from adults that scientists originally thought they were a totally different group of fish.

“Modern lamprey larvae have been used as a model of the ancestral condition that gave rise to the vertebrate lineages,” Miyashita continued. “They seemed primitive enough, comparable to wormy invertebrates, and their qualities matched the preferred narrative of vertebrate ancestry. But we didn’t have evidence that such a rudimentary form goes all the way back to the beginning of vertebrate evolution.”

Newly discovered fossils in Illinois, South Africa and Montana are changing the story. Connecting the dots between dozens of specimens, the research team realized that different stages of the ancient lamprey lifecycle had been preserved, allowing paleontologists to track their growth from hatchling to adult. On some of the smallest specimens, about the size of a fingernail, soft tissue preservation even shows the remains of a yolk sac, indicating that fossil record had captured these lampreys shortly after hatching.

Crucially, these fossilized juveniles are quite unlike their modern counterparts (known as “ammocoetes”), and instead look more like modern adult lampreys, with large eyes and toothed sucker mouths. Most excitingly, this phenotype can be seen during the larval phase in multiple different species of ancient lamprey.

“Remarkably, we’ve got enough specimens to reconstruct a trajectory from hatchling to adult in several independent lineages of early lampreys,” said Michael Coates, PhD, a professor in the Department of Organismal Biology and Anatomy at UChicago, “and they each show the same pattern: the larval form was like a miniature adult.”

The researchers say that these results challenge the 150-year-old evolutionary narrative that modern lamprey larvae offer a glimpse of deep ancestral vertebrate conditions. By demonstrating that ancient lampreys never went through the same blind, filter-feeding stage seen in modern species, the researchers have falsified this cherished ancestral model.

“We’ve basically removed lampreys from the position of the ancestral condition of vertebrates,” said Miyashita. “So now we need an alternative.”

After looking back at the fossil record, the team now believes that extinct armored fishes known as ostracoderms might instead represent better candidates for the root of the vertebrate family tree, whereas modern lamprey larvae are a more recent innovation. The team thinks the evolution of filter-feeding larvae may have allowed lampreys to populate rivers and lakes. Fossil lampreys reported in the new study all came from marine sediments, but modern lampreys mostly live in freshwater.

The researchers say that this is the sort of discovery that can rewrite textbooks. “Lampreys are not quite the swimming time capsules that we once thought they were,” said Coates. “They remain important and essential for understanding the deep history of vertebrate diversity, but we also need to recognize that they, too, have evolved and specialized in their own right.”

The study, “Non-ammocoete larvae of Palaeozoic stem lampreys,” was supported by the National Science Foundation (DEB-1541491). The team credits the hard work of their collaborators and co-authors, including Rob Gess, PhD of the Albany Museum in South Africa, with identifying multiple larval fossil samples, and Kristen Tietjen of the University of Kansas with CT scan and life reconstruction of fossil lampreys.

The University of Chicago Medicine, with a history dating back to 1927, is one of the nation’s leading academic health systems. It unites the missions of the University of Chicago Medical Center, Pritzker School of Medicine and the Biological Sciences Division. Twelve Nobel Prize winners in physiology or medicine have been affiliated with the University of Chicago Medicine. Its main Hyde Park campus is home to the Center for Care and Discovery, Bernard Mitchell Hospital, Comer Children’s Hospital and the Duchossois Center for Advanced Medicine. It also has ambulatory facilities in Orland Park, South Loop and River East as well as affiliations and partnerships that create a regional network of care. UChicago Medicine offers a full range of specialty-care services for adults and children through more than 40 institutes and centers including an NCI-designated Comprehensive Cancer Center. Together with Harvey-based Ingalls Memorial, UChicago Medicine has 1,296 licensed beds, nearly 1,300 attending physicians, over 2,800 nurses and about 970 residents and fellows.