Symptoms may be mistaken for COVID-19; hospitalizations are common 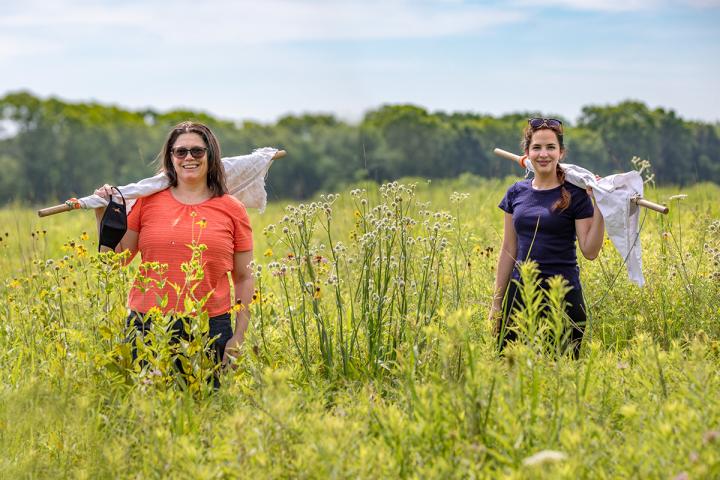 CHAMPAIGN, Ill. — Researchers have confirmed that Heartland virus, an emerging pathogen with potentially dire consequences for those infected, is present in Lone Star ticks in two Illinois counties hundreds of miles apart. Lone Star ticks were first detected in Illinois in 1999, but had not been found to be infected with Heartland virus in the state.

The findings are reported in the journal Emerging Infectious Diseases.

In July 2018, a resident of Kankakee County was hospitalized after suffering several tick bites while camping on private property. Two months later and more than 250 miles to the south, a resident of Williamson County was hospitalized with many of the same symptoms: fever, diarrhea, headache, fatigue, decreased appetite and nausea. This patient also noticed tick bites after camping. The Centers for Diseases Control and Prevention confirmed that clinical samples from both patients tested positive for Heartland virus, which is spread by ticks. Both patients eventually recovered.

Tick-borne illnesses share symptoms with many other diseases and misdiagnoses sometimes occur, said Holly Tuten, a vector ecologist with the Illinois Natural History Survey who led the new research. INHS is a division of the Prairie Research Institute at the University of Illinois at Urbana-Champaign.

“Heartland virus won’t show up on a standard diagnostic panel for tick-borne bacterial diseases,” she said. “And with COVID-19 on the collective mind, a tick-borne viral infection could be overlooked, especially in cases where a tick bite was missed.”

According to the CDC, there are no vaccines to prevent infection with the Heartland virus or medications to treat it. Most people infected with the virus end up hospitalized and a few have died.

To determine the source of the viral infections, health department officials in each county interviewed the patients to learn where they were when they were bit. This information allowed Tuten and her team to determine whether ticks in those areas carried the virus.

Previous research showed that the Lone Star tick, Amblyomma americanum, can carry and transmit the Heartland virus, so the researchers focused their efforts on collecting this species.

The site in Kankakee County was a rural homestead with barnyard animals and a small amount of forest surrounded by cropland, Tuten said. The patient in Williamson County may have been exposed in a heavily wooded wildlife refuge or outside a suburban home with a few trees.

The researchers collected ticks in all three locales. They shipped their tick samples to the CDC Arboviral Diseases Branch in Fort Collins, Colorado, where the ticks were combined in batches of 10-30 for testing.

“A single batch of male Lone Star ticks from each county was found to be positive for the Heartland virus,” Tuten said. “Infected Lone Star ticks had been found as far north as Missouri, so we expected to find the infections in ticks from Williamson County in the southern part of Illinois. But finding so many Lone Star ticks in Kankakee County, including some with the virus, really surprised us.”

The detection of Heartland virus in adult Lone Star ticks a year after human infection suggests that the infected ticks may have overwintered in the area, Tuten said.

“We want to alert physicians and public health officials throughout Illinois that there is a fairly new pathogen out there that is a danger to public health,” she said. “I don’t want people to avoid the woods and parks. I just want them to be aware, so they can take concrete steps to reduce tick encounters and bites.”

This investigation was a collaboration between the INHS Medical Entomology Laboratory, the Illinois Department of Public Health, the CDC, conservation officials and Illinois residents.

The INHS-MEL began the first statewide and state-funded tick surveillance program through a contract with the IDPH. For more information, visit the IDPH website, where surveillance data are reported, or the INHS-MEL lab website. Public health, land management and wildlife conservation personnel, along with those in similar professions, are encouraged to reach out to Holly Tuten for tick outreach materials, training in field collections, identifications and testing.

The paper “Heartland virus in humans and ticks, Illinois, USA, 2018-2019” is available online and from the U. of I. News Bureau.