The London Tech Bridge (LTB) will leverage partnerships with the U.S. Office of Naval Research Global (ONR Global) and Royal Navy Office of the Chief Technology Officer to foster connectivity, agility and innovation. The location will sponsor dialogue, joint investment and cooperative development between the two navies. 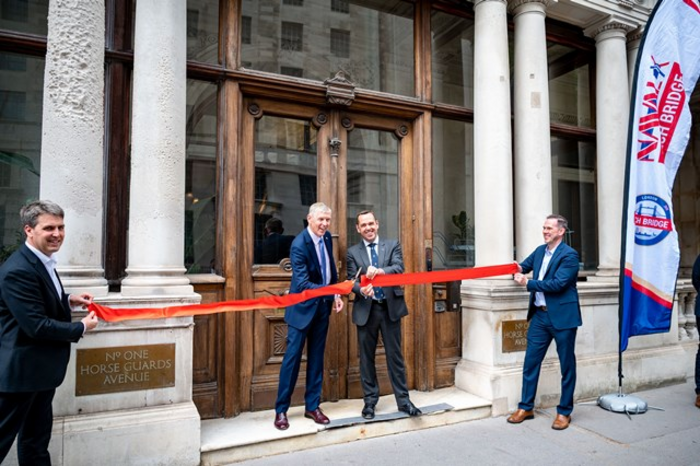 The London Tech Bridge (LTB) will leverage partnerships with the U.S. Office of Naval Research Global (ONR Global) and Royal Navy Office of the Chief Technology Officer to foster connectivity, agility and innovation. The location will sponsor dialogue, joint investment and cooperative development between the two navies.

“We’re looking for partners with strong curiosity, a passion for action and a commitment to scientific and technological excellence.”

Initially launched at the end of 2020 during a virtual ceremony, the LTB has already made strides in moving the innovation needle.

For example, it played a critical role in the recent APEX underwater Challenge. The London Tech Bridge coordinated and arranged sponsorship for three research grants to teams from the University of Rhode Island (U.S.), Robert Gordon University (Scotland) and TNO (Netherlands Organisation for Applied Scientific Research) in the Netherlands to execute the challenge. These teams helped Unmanned Underwater Vessels (UUVs) sense objects with sonar or optical cameras and communicate what they “saw” to operators.

“The London Tech Bridge does exactly what it says on the tin. Being in London, right next to the strategic headquarters of our Armed Forces, and at the heart of this great global city, allows exposure not only to the latest thinking in Defence innovation, but provides physical access to those varied organisations and individuals conducting some of the most exciting technological research and development anywhere in the world.

“As such, it’s all about Tech — sharing our understanding of exciting developments in autonomy, materials, platforms, sensors, processing and concepts, and unlocking the Royal Navy’s connections to those world leading academic, industrial and public sector organisations in the U.K., towards achieving our common goals.

“And perhaps most importantly, it’s a figurative Bridge, one that permits the Royal Navy to reach across the Atlantic into the U.S. Navy, and vice versa, enabling our great nations to join forces in collaborating ever closer, in order to identify the opportunities, and solve the problems, that either or both of us have identified.

“I pay tribute to those who have made the London Tech Bridge happen in the U.S. Office of Naval Research and the Royal Navy’s Office of the Chief Technology Officer, and I greatly look forward to our respective teams working ever closer together, in pursuit of our shared aims.”

The LTB’s new location will also conduct its initial “Tea and Tech” in June, kicking off a monthly session with industry in specified technology areas. Tea and Tech will allow companies to pitch their ideas and technology to the U.S. and U.K. navies.

The Tech Bridge network, powered by NavalX, spans 18 national and international locations. The network is designed to bridge the gap between the Navy and emerging entities like startups, small businesses, academia, nonprofits and private capital that aren’t traditionally part of the Navy’s development and acquisition process.

Although there is some commonality among them, the Tech Bridges offer unique services and focus areas within their ecosystems, based on the needs of the customers in their respective areas of responsibility. The LTB uniquely builds upon the historic relationship between the U.S. and U.K., and seeks innovation and technology in several key focus areas, including artificial intelligence, autonomous systems, directed energy, green energy, advanced manufacturing and maintenance and sustainment.

While the Tech Bridge has defined these focus areas to guide its work, it remains open to innovative ideas and game-changing technologies; it remains agile and anticipates its focus areas evolving over time. Its U.K. Co-Director, Royal Navy Commander Laurence Mallinson, emphasized the need for flexibility in the Tech Bridge.

“Having started virtually a year ago, it is great to finally have a place to hold those vital face-to-face meetings and collaboration events. We are right in the heart of one of the world’s most advanced tech centers and so able to bring cutting-edge tech solutions to our navies’ problems,” he said. “We will focus on challenging industry with solving some of the most pressing problems that our navies are trying to resolve, and bring to the attention of our sailors and marines some of the greatest new technologies in the U.K.”

In pursuit of these focus areas, the LTB is changing how the navies interact with industry, especially small businesses and non-traditional defense contractors, according to its U.S. Co-Director, Jeffrey Brewer.

“The Tech Bridge in Central London provides us access to start ups and innovators. This location allows us to engage on equal footing with meeting tech firms, startups and innovators in an open and familiar environment.”

The addition of a physical innovation hub to the LTB framework removes the typical meeting barriers of attending events on a military base and allows for the free flow of thoughts and innovation with limited bureaucracy.

NavalX serves the U.S. Navy and Marine Corps as an innovation and agility cell, supporting and connecting initiatives across the Department of Defense. The organization connects teams with tools, training and resources — enabling people to think differently and deliver more effective solutions to the warfighter.

NavalX works extensively with ONR Global — which is ONR’s international arm, sponsoring scientific efforts outside of the U.S. and working with scientists and partners worldwide to discover and advance naval capabilities.