Researchers from CRAG and IRTA find the gene that determines Japanese plum skin colour due to the presence or absence of anthocyanins, a group of plant antioxidant pigments with health-promoting effects 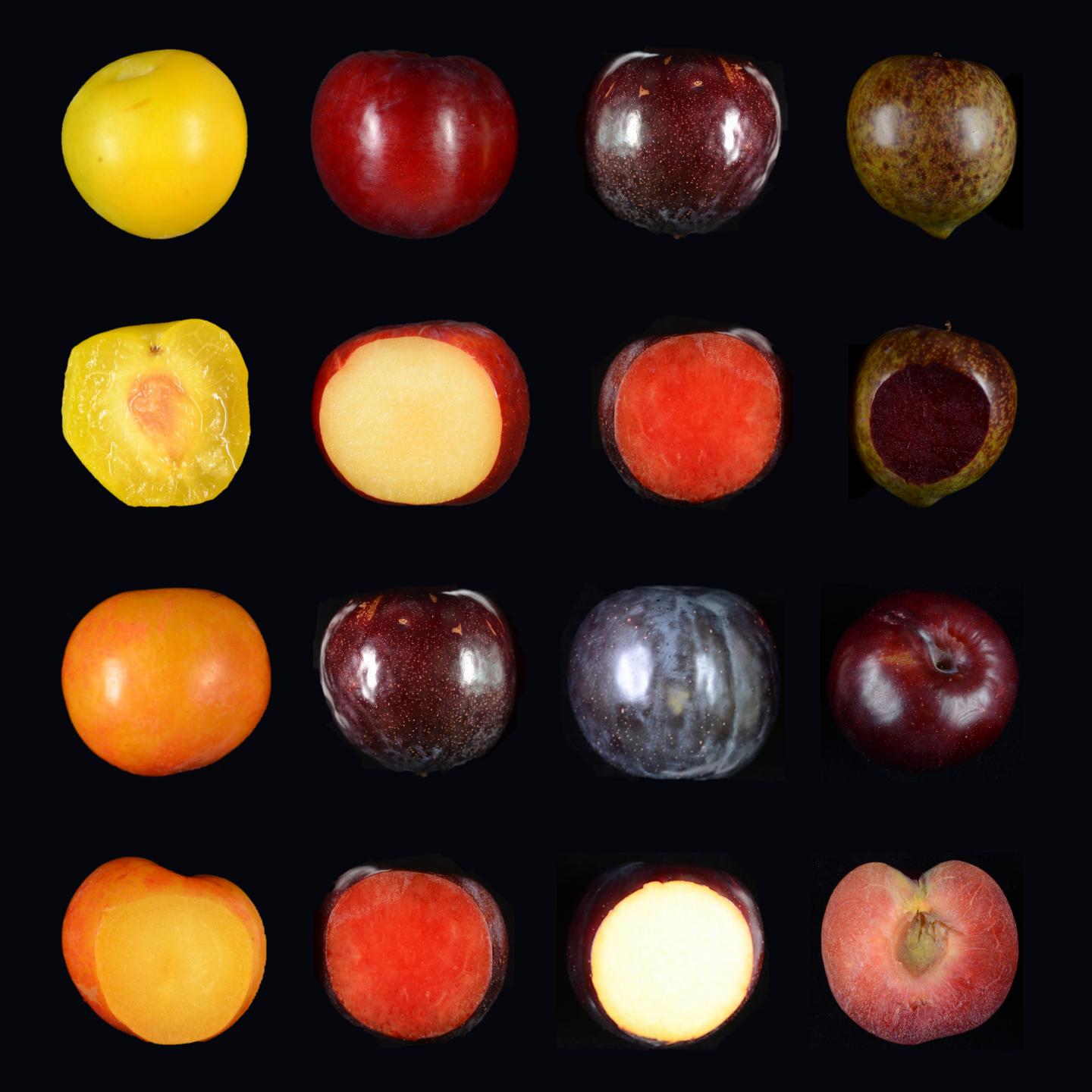 The presence and accumulation of the antioxidant pigment anthocyanin dictates fruit hue in plums, and the synthesis of this compound is known to be regulated by the MYB10 genes. Now, researchers from the Centre for Research in Agricultural Genomics (CRAG) and the Institute of Agrifood Research and Technology (IRTA) have found the gene that determines Japanese plum skin colour. In a study published at the scientific journal Frontiers in Plant Science, the team reveals that the plum genome contains several copies of the MYB10 genes, and that DNA variations in one of these copies cause plums to have anthocyanins in the skin (showing a blue to red colour) or not (presenting a yellow or green tone).

The Japanese plum, highly appreciated for its juiciness, is the most abundant on the market for direct fresh consumption, and Spain is one of its largest producers in the European Union, with plum trees mainly grown in the regions of Extremadura, Andalusia and Murcia. This new study provides a highly efficient tool for early selection of coloured and non-coloured fruits in Japanese plum breeding programmes, an advancement aligned with the goals of the International Year of Fruits and Vegetables (IYFV), designated by the UN General Assembly, to increase efficiency in fruit food systems and to promote healthy nutrition through fruit consumption.

The red to blue hue of flowers and fruits is due to anthocyanins, a group of antioxidant pigments that enhance flower pollination and provide plants protection from light damage and dehydration. Including these healthy antioxidants in our diet has been linked to anti-carcinogenic and anti-inflammatory effects, and to the prevention of cardiovascular diseases, diabetes and obesity.

Apples, pears, peaches, apricots, plums, cherries and strawberries, all of which belong to the Rosaceae family, are broadly considered a source of anthocyanins, contained in their skin and flesh. As fruit colour has both an important impact in consumer choice and nutritional quality, it is not surprising that there is considerable interest in breeding these crops to obtain new varieties bearing fruits with diverse colours, hues and patterns while enhancing their health benefits.

Focusing on the Japanese plum

Within the Rosaceae crops, Japanese plum is among those with the highest fruit colour variation both in hue and pattern, going from anthocyanin-less green and yellow to red, purple or blue. &laquoPrevious studies in Rosaceae species show that the synthesis and accumulation of anthocyanins is regulated by the MYB10 genes. Accordingly, the analysis of these genes in several Japanese plum has been proven to be an excellent model to understand how fruit colour is determined», indicates Arnau Fiol, PhD student at CRAG and first author of the article.

&laquoIn this study, we examined the MYB10 genes in a panel of Japanese plum varieties and we found that they are highly variable. Surprisingly, we discovered that some cultivars have three copies of one of the MYB10 genes, which adds up to the already complex analysis of plum colour variation», explains Maria José Aranzana, IRTA researcher at CRAG in charge of this work. &laquoBy studying how these gene variants are inherited, we were able to identify which gene variant combinations are associated with the anthocyanin (red to blue) and anthocyanin-less (green or yellow) fruit skin colorations», she adds.


Boosting the development of new varieties

Imagine we want to develop a new blue plum variety with lots of anthocyanins to benefit from its nutraceutical properties. New fruit tree varieties are obtained in breeding programmes by crossing individuals and examining the hundreds or thousands of descendants looking for those that present the desired trait, say a bluer plum, and that also meet demanding product quality standards. Between 10 and 20 years may pass from the first cross until the registration of a new variety, as it takes a long period for trees to bear fruits (about 3 to 4 years in plum trees) and they must pass several exhaustive evaluations.

&laquoIn our work, we have identified the gene variants that cause anthocyanins to accumulate or not in Japanese plum skin. This means that, by just studying the seedlings’ DNA, we can efficiently predict the skin colour of the fruits they will bear as soon as the plants germinate, allowing us to promptly discard all the seedlings that will produce green fruits. Thanks to this early screening, we’d need a smaller growing area and fewer resources (hydric, nutritional, phytosanitary and human) to obtain the desired new anthocyanin-rich plum variety, with the consequent economic and environmental benefits», points out Aranzana.

The reliable molecular marker for early selection of coloured and non-coloured Japanese plums developed in this research can be effectively used in breeding programmes. Anticipating at a seedling level the colour of the fruit that plants will produce in 3-4 years significantly shortens and optimizes the breeding process. Since the mechanism underlying variation in fruit colour is conserved within the Rosaceae family, this tool holds promising prospects for anthocyanin-determined colour selection in other related species of agronomic interest.

About the funding of the study

About the Centre for Research in Agricultural Genomics (CRAG)

The Centre for Research in Agricultural Genomics (CRAG) is a centre that forms part of the CERCA system of research centres of the Government of Catalonia (Spain), and which was established as a partnership of four institutions: the Spanish National Research Council (CSIC), the Institute for Agrifood Research and Technology (IRTA), the Autonomous University of Barcelona (UAB) and the University of Barcelona (UB). CRAG’s research spans from basic research in plant and farm animal molecular biology, to applications of molecular approaches for breeding of species important for agriculture and food production in close collaboration with industry. Since 2016, CRAG is recognized as a “Severo Ochoa Centre of Excellence in R&D” by the Spanish Government.

About the Institute for Agrifood Research and Technology (IRTA)

IRTA is a research institute dedicated to agrifood R&D in the fields of plant production, animal production, food industries, environment and global change, and agrifood economics. The transfer of its scientific advances contributes to the modernization, competitiveness and sustainable development of the agricultural, food and aquaculture sectors, to the provision of healthy and quality food for consumers and to the improvement of the well-being of the population. IRTA is attached to the Ministry of Climate Action, Food and Rural Agenda of the Generalitat de Catalunya, and is part of the CERCA system.