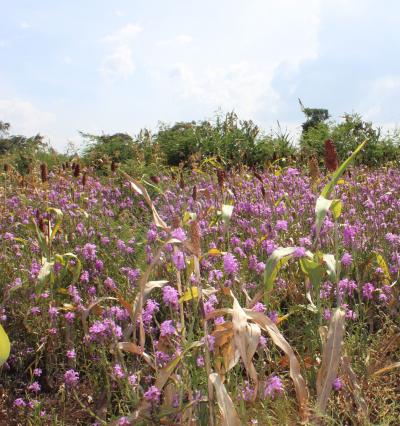 Sorghum crops in areas where the agricultural parasite striga, also known as witchweed, is common are more likely to have genetic adaptations to help them resist the parasite, according to new research led by Penn State scientists. Changes to the LGS1 gene affect some of the crop’s hormones, making it harder for parasites to find in the soil, at least in some regions. The changes, however, may come at a cost, affecting photosynthesis-related systems and perhaps growth. The new study by an international team of researchers appears online February 11, 2020, in the journal Proceedings of the National Academy of Sciences and may eventually inform strategies for managing the parasite.

Witchweed is one of the greatest threats to food security in Africa, causing billions of dollars in crop losses annually. It has a variety of hosts, including sorghum, the world’s fifth most important cereal crop.

“We wanted to know if sorghum plants in areas with high parasite prevalence were locally adapted by having LGS1 mutations,” said Jesse Lasky, assistant professor of biology at Penn State and senior author of the paper. “We often think about local adaptation of agricultural crops with regard to factors like temperature, drought, or salinity. For example, if plants in a particularly dry region were locally adapted to have genes associated with drought-tolerance, we could potentially breed plants with those genes to resist drought. We wanted to know if you could see this same kind of local adaptation to something biotic, like a parasite.”

The researchers modeled the prevalence of witchweed across Africa and compared the presence of LGS1 mutations thought to confer some resistance in sorghum. They found that these mutations were more common in areas with high parasite prevalence, suggesting that sorghum plants in those areas may be locally adapted to deal with the parasite.

“The LGS1 mutations were widespread across Africa where parasites were most common, which suggests they are beneficial,” said Emily Bellis, postdoctoral researcher at Penn State at the time of the study and first author of the paper. Bellis is currently an assistant professor of bioinformatics at Arkansas State University. “But these mutations were not very common, and nearly absent outside of parasite-prone regions. This indicates that there may also be a cost, or tradeoff, to having these mutations.”

To better understand the effects of the LGS1 mutations, members of the research team at Corteva Agriscience used CRISPR-Cas9 gene-editing technology to replicate the mutations in the lab. The loss of LGS1 function did appear to confer resistance to witchweed in their experiments, as parasites had germination rates that were low or even zero, suggesting the parasites were not as successful at finding the crop to reproduce. But parasites collected from different geographic locations in Africa were affected in different ways.

“Germination of parasites from a population in West Africa was effectively shut down in both nutrient-rich and nutrient-poor conditions, but we still saw germination up to about 10% for a population in East Africa when nutrients were limited,” said Bellis. “That is definitely an improvement, but there can be thousands of parasites in the soil, so even 10% germination can be problematic, especially in the smallholder farms where these crops are predominantly grown.”

LGS1 mutations are known to affect strigolactone hormones that sorghum releases from its roots. Because the parasite uses these hormones to find sorghum, altering the hormones makes the plant mostly invisible to the parasite. But strigolactones are also important for communication with mycorrhizal fungi, which play an important role in the plant’s acquisition of nutrients. The new study found that loss of LGS1 function in the modified plants also affected systems related to photosynthesis and subtly affected growth.

“It may be that plants with LGS1 mutations are better at hiding from the parasites, but are less productive,” said Lasky. “This potential tradeoff might explain the relatively low prevalence of these mutations in sorghum across Africa.”

The researchers also identified several mutations in other genes that are related to parasite prevalence, which might reflect local adaptation. The researchers plan to investigate these genes–some of which are involved in cell-wall strengthening, to see if they may also confer resistance to the parasite.

“We eventually would like to look at other agriculturally important host plants of striga in Africa to ask similar questions,” said Lasky. “If we do indeed see local adaptation to the parasite and find genes that confer resistance with few tradeoffs, we may be able to capitalize on that from a management perspective.”

In addition to Lasky and Bellis, the research team includes Elizabeth Kelly, Claire Lorts, Victoria DeLeo and Claude dePamphilis at Penn State; Huirong Gao and N. Doane Chilcoat at Corteva Agriscience; Germinal Rouhan at Sorbonne Université in France; Andrew Budden at the Royal Botanic Gardens Kew in the United Kingdom; Govinal Badiger Bhaskara and Thomas Juenger at the University of Texas; Zhenbin Hu and Geoffrey Morris at Kansas State University; Robert Muscarella at Uppsala University in Sweden; Michael Timko at the University of Virginia; Baloua Nebie at the International Crops Research Institute for the Semi-Arid Tropics in Mali; and Steven Runo at Kenyatta University in Kenya. This work was supported in part by the National Science Foundation, the Advanced Research Projects Agency-Energy, and the U.S. Department of Energy.

3D-printed device finds ‘needle in a haystack’ cancer cells by…

The best of two worlds: Magnetism and Weyl semimetals