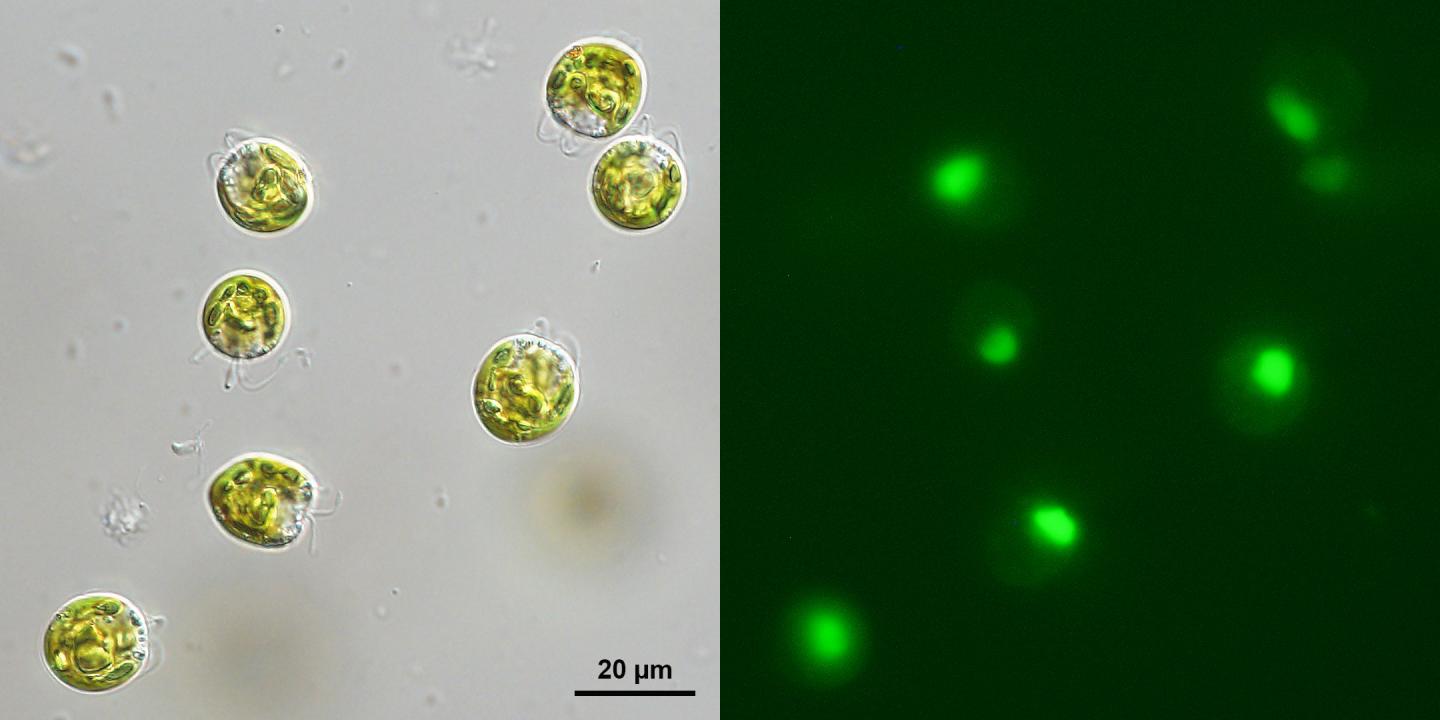 New research suggests that the ability of green algae to eat bacteria is likely much more widespread than previously thought, a finding that could be crucial to environmental and climate science. The work, led by scientists at the American Museum of Natural History, Columbia University, and the University of Arizona, found that five strains of single-celled green algae consume bacteria when they are “hungry,” and only when those bacteria are alive. The study is published today in The ISME Journal.

“Traditionally, we think of green algae as being purely photosynthetic organisms, producing their food by soaking in sunlight,” said Eunsoo Kim, an associate curator at the American Museum of Natural History and one of the study’s corresponding authors. “But we’ve come to understand that there are potentially a number of species of green algae that also can eat bacteria when the conditions are right. And we’ve also found out just how finicky they are as eaters.”

In 2013, Kim and her colleagues were the first to provide definitive proof that green algae eat bacteria, which they showed in an alga from the genus Cymbomonas. While some in the field viewed this behavior as a rare exception, Kim’s lab continued to explore whether mixotrophy–the term that describes the mode by which organisms use both photosynthesis and phagocytosis (cell-eating) to power themselves–existed in other types of green algae. It was a difficult behavior to confirm until the research team came up with a new experimental approach led by Nicholas Bock, a graduate student at Columbia University’s Lamont-Doherty Earth Observatory, and Museum postdoctoral researcher Sophie Charvet.

The researchers conducted feeding experiments with live bacteria that were labeled with a non-toxic fluorescent dye and combined the bacteria with five different strains of unicellular green algae called prasinophytes for analyses through a flow cytometer, which helps scientists analyze cell properties in solution. The flow cytometer measured increasing levels of green fluorescence in the algal cells over time, suggesting that the algae were consuming the glowing bacteria. To confirm that ingestion was actually occurring, the researchers used high-precision microscopy to pinpoint the origin of the green fluorescence to the interior of the algal cells. In the process, the team discovered two particular quirks about the finicky eaters: the algal strains they tested only ate live bacteria (dead bacteria in the experiments were left untouched), and they ate more when the levels of other nutrients were low. These findings have large implications for the environmental study of green algae.

“Traditionally when people study bacterial ingestion by algae in the oceans for environmental samples, they use fluorescently labeled bacteria that have been killed in the labeling process,” Charvet said. “At least for the five algal strains we had in culture, they preferentially feed on the live bacteria and seem to be snubbing the killed bacteria. This means that the impact of algae on bacterial communities in their natural environment has possibly been underestimated drastically because of the methods used.”

Green algae are found around the world and help form the foundation of the aquatic food web. Along with other photosynthetic organisms like cyanobacteria, diatoms, and dinoflagellates–which are given the umbrella term phytoplankton–green algae function as a sort of biological carbon pump, consuming carbon dioxide on a scale equivalent to trees and other land plants in terrestrial ecosystems.

“For decades, scientists have been able to send satellites up and get optical data to infer global distributions of phytoplankton via chlorophyll measurement,” said Bock, who conducted the work at Columbia under Solange Duhamel, now at the University of Arizona, Tucson. “Through that, we’ve come to understand that phytoplankton are vitally important for carbon cycling. The assumption in all of this is that all that chlorophyll just represents photosynthesis. It doesn’t account for the mixotrophy piece because there’s no easy way to detect [via satellite] if they’re eating other cells. Our findings highlight that the story is actually more complex.”

In parallel to the experiments led by Bock and Charvet, green algal bacteria-eating was investigated using a gene-based prediction model formulated by John Burns from the American Museum of Natural History and the Bigelow Laboratory for Ocean Sciences. The predictions agreed with the experimental results and suggested that the behavior is even more widespread among the green algal tree of life.

Other authors of this work include Yangtsho Gyaltshen from the American Museum of Natural History and Andrey Rozenberg from the Israel Institute of Technology.

The American Museum of Natural History, founded in 1869 and currently celebrating its 150th anniversary, is one of the world’s preeminent scientific, educational, and cultural institutions. The Museum encompasses more than 40 permanent exhibition halls, including those in the Rose Center for Earth and Space, as well as galleries for temporary exhibitions. The Museum’s approximately 200 scientists draw on a world-class research collection of more than 34 million artifacts and specimens, some of which are billions of years old, and on one of the largest natural history libraries in the world. Through its Richard Gilder Graduate School, the Museum grants the Ph.D. degree in Comparative Biology and the Master of Arts in Teaching (MAT) degree, the only such free-standing, degree-granting programs at any museum in the United States. The Museum’s website, digital videos, and apps for mobile devices bring its collections, exhibitions, and educational programs to millions around the world. Visit amnh.org for more information.