Lithium-air batteries can store energy for cars, houses and industry 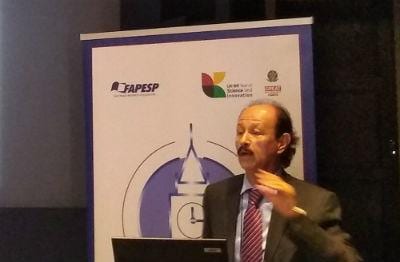 Current lithium ion battery technology will probably not be able to handle the coming decades’ huge demand for energy. It is estimated that by 2050, electricity will make up 50% of the world’s energy mix. Today that rate is 18%. But installed capacity for renewable energy production is expected to increase fourfold. This will require batteries that are more efficient, cheaper and environmentally friendly.

One of the alternatives being studied today in many parts of the world is the lithium-air battery. Some of the Brazilian efforts in the search for such device were presented on Day Two of FAPESP Week London, held February 11-12, 2019.

“There is a lot of talk today about electric cars. Some European countries are also thinking about banning combustion engines. In addition, renewable sources like solar energy need batteries to store what is generated during the day through solar radiation,” said Rubens Maciel Filho, a professor at the School of Chemical Engineering of the University of Campinas (UNICAMP).

The lithium-air battery, currently functioning only on a laboratory scale, uses ambient oxygen as a reagent. The battery stores additional energy through an electrochemical reaction that results in the formation of lithium oxide.

“It is a sustainable way to store electrical energy. With advances, it can support numerous discharge/charge cycles. It has great potential for use in transportation, in light and heavy vehicles alike. It can also work in electric power distribution networks,” said the researcher.

But turning experiments into commercially viable products involves understanding the fundamentals of the electrochemical reactions that occur in the process.

“It also requires the development of new materials that allow us to leverage desirable reactions and minimize or avoid undesirable ones,” said Maciel, director of the New Energy Innovation Center (CINE). With units at UNICAMP, the Nuclear Energy Research Institute (IPEN) and the São Carlos Chemistry Institute at the University of São Paulo (USP), the center is supported by FAPESP and Shell under the scope of the Engineering Research Centers Program (ERC).

He went on to explain that some of the phenomena need to be observed in operando, or in other words, in real time. “The idea is to keep track of the reactions that occur in dynamic experiments and the different chemical species that are formed, even if temporarily.

Otherwise, some of the stages in the process get lost and the battery becomes inefficient in terms of charge time and duration of charge.”

To conduct these measurements, the researchers are using the National Synchrotron Light Laboratory (LNLS) at the Brazilian Center for Light Research in Energy and Materials (CNPEM), located in Campinas.

Another project presented during the session involved sulfur-air batteries. Despite not being as efficient, they are inexpensive and store energy for many hours. “They can store energy for up to 24 hours at a very low cost. Its main ingredients are sulfur and caustic soda and they are extremely inexpensive. That is why we are investing in them,” said Nigel Brandon, a professor at Imperial College.

Because of these characteristics, sulfur-air batteries can be used in homes or businesses. Brandon believes, however, that their greatest potential is in charging stations for electric cars, which will become much more commonplace due to the European goal of cutting carbon emissions 80% by 2050.

“It is important to underscore the fact that the different battery projects are not competing with each other but rather are complementing each other,” said Geoff Rodgers of Brunel University London, session facilitator.

More efficient batteries are particularly important in a scenario in which the use of solar energy is expected to increase. Peak solar radiation during the day will require the need for efficient storage of energy so it can be drawn upon at night.

Maciel also talked about a project at CINE to develop more efficient photovoltaic cells that could be used in the future to convert solar energy to electricity as well to obtain chemical products, or even hydrogen from water hydrolysis.

Liquid hydrogen is a very efficient fuel, but its production entails high-energy costs. It is one of the options being considered in the United Kingdom since biofuels are not as viable as in Brazil.

“We are looking for new bacterial enzymes for oxidation of lignin, an aromatic polymer that makes up more than 25% of plant cell walls and is part of the residue of biofuel production. The goal is to develop new products such as biofuels, new plastics and chemical products for industry,” said Timothy Bugg of the University of Warwick.

With begun last year, the CINE has a research program oriented towards the conversion of methane into chemical products, a process that involves the development of catalysts and materials. The program is coordinated by Fabio Coral Fonseca (https://bv.fapesp.br/en/pesquisador/8069/fabio-coral-fonseca/) of the IPEN.

Ana Flavia Nogueira of UNICAMP’s Chemistry Institute is heading up the liquid hydrogen initiative. The center also has a Computational Material Science and Chemistry Program, which uses mathematical models to enable molecular level analysis of the impact of new materials and their interactions with molecules of interest. These studies are being led by Juarez Lopes Ferreira da Silva, a professor at USP’s São Carlos Chemistry Institute.