LIM domain only 1: One gene, many roles in cancer 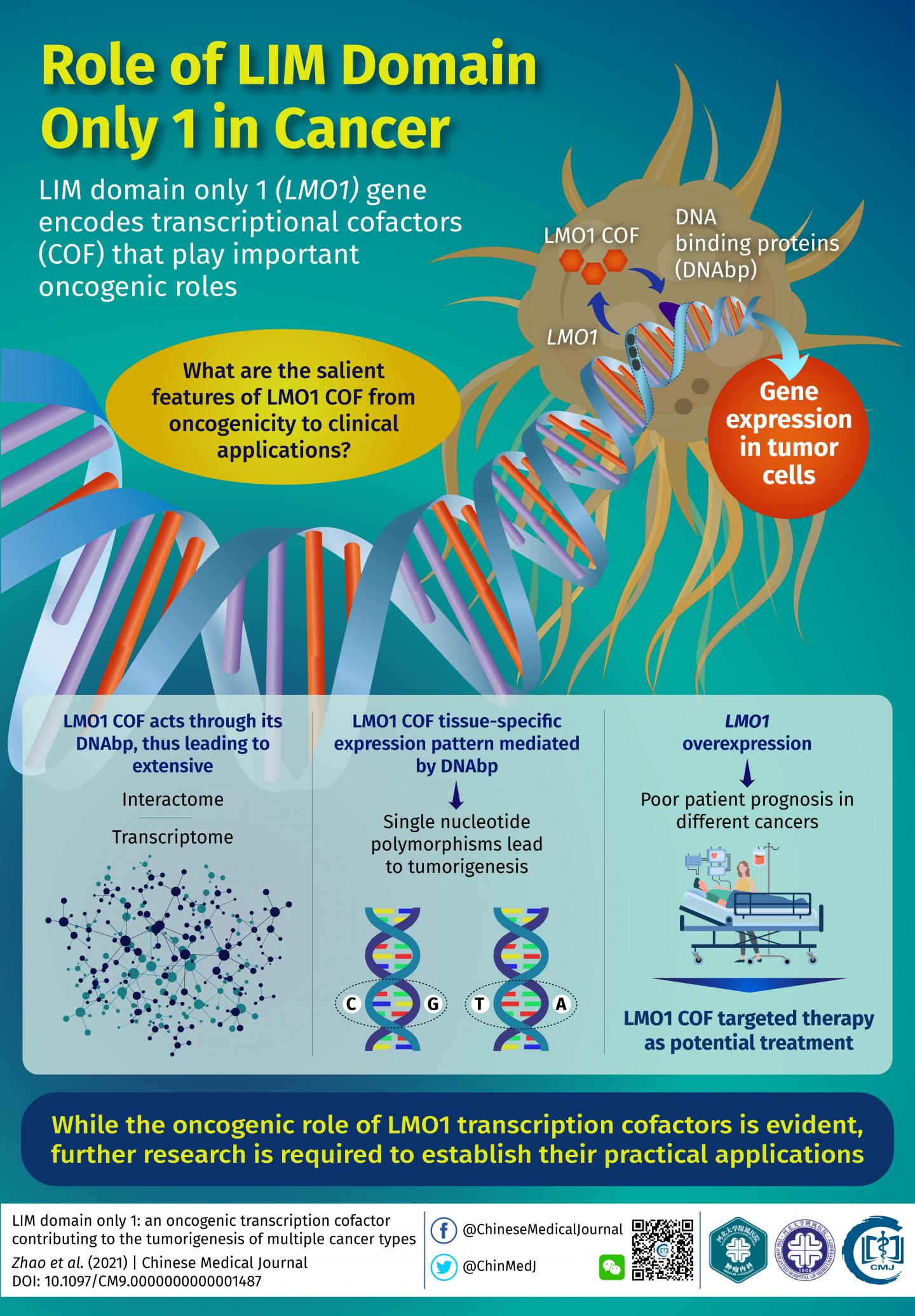 Humans have been plagued by a myriad of deadly cancers since ages. Parallelly, they have also been attempting different permutations and combinations of treatments to cure the disease. Part of these attempts involving biomolecular targets have come to the fore in recent years. Like a broad-spectrum antibiotic that can attack and eliminate several microbes at a time, some of these biomolecular targets, when manipulated appropriately, can alleviate different cancers. One such biomolecular target of interest is LIM domain only 1 gene (LMO1).

LMO1 codes for a protein ‘connector’ that helps in the assembly of biomolecules involved in the production of RNA molecules, which in turn, leads to the synthesis of proteins implicated in cancer formation. This generates hope for devising ways to manipulate LMO1, which could take modern medicine one step closer to curing cancer. As such, a group of medical researchers from Affiliated Hospital of Hebei University in China, and Texas State University in USA, took it upon themselves to answer this question better, through a review published in Chinese Medical Journal.

The researchers scanned several studies on LMO1 to determine its key molecular features. On the question of why they narrowed their focus on LMO1, Professor You-Chao Jia of Affiliated Hospital of Hebei University, who led the study, explains, “Unique biological features of LMO1 distinct from other LMO members, such as its tissue-specific expression patterns, interacting proteins, and transcriptional targets, have been increasingly recognized. Studies indicated that LMO1 plays a critical oncogenic role in various types of cancers, including T-cell acute lymphoblastic leukemia, neuroblastoma, gastric cancer, lung cancer, and prostate cancer.”

The protein ‘connectors’ that LMO1 codes for are called as transcription cofactors (COF). Much like a puppeteer who manipulates strings to move the puppets in different ways, the LMO1 COF acts through its protein products to effect various cancer-causing changes in the cell. Here, it is important to note that these protein products regulate expression by binding to the DNA. So, through their DNA-binding protein counterparts, LMO1 COF extensively interacts with other important components of the cell and facilitates production of other proteins, essentially functioning as a carcinogenic ‘power-broker’ of sorts. Accordingly, the researchers stress the importance of better studying the LMO1 interactome and transcriptome in the review.

Moving to a higher level of organization, the researchers also looked into the tissue-specific expression of LMO1 in cancer. Here again, they identified the mediation of LMO1 activities through its DNA-binding ‘partners’. So, they propose that the analysis of cancer condition should incorporate not only LMO1 expression, but also nuances in their partners’ expression. They observed similar correlations at the epigenetic level too.

Needless to say, the researchers highlight the diagnostic value of LMO1 expression levels. They observed from several studies that the overexpression of LMO1 is implicated in poor patient clinical outcomes in different cancers. Therefore, they believe that with a little more analysis, LMO1 expression levels could well become the clinical determiner of cancer progression in affected patients. Also, they implied that further research into the gene could lead to targeted therapy for these cancers.

Overall, the researchers have made a convincing argument to take a better look at LMO1 for devising more effective cures for different cancers. In this regard, Professor Jia hopes, “LMO1 is an oncogene or a key factor in carcinogenesis in many kinds of cancers. We hope that more studies will be carried out to explore its application value in clinical treatment of tumors.” The world can indeed be optimistic about a possible breakthrough in cancer cure, through this review.

Title of original paper: LIM domain only 1: an oncogenic transcription cofactor contributing to the tumorigenesis of multiple cancer types.