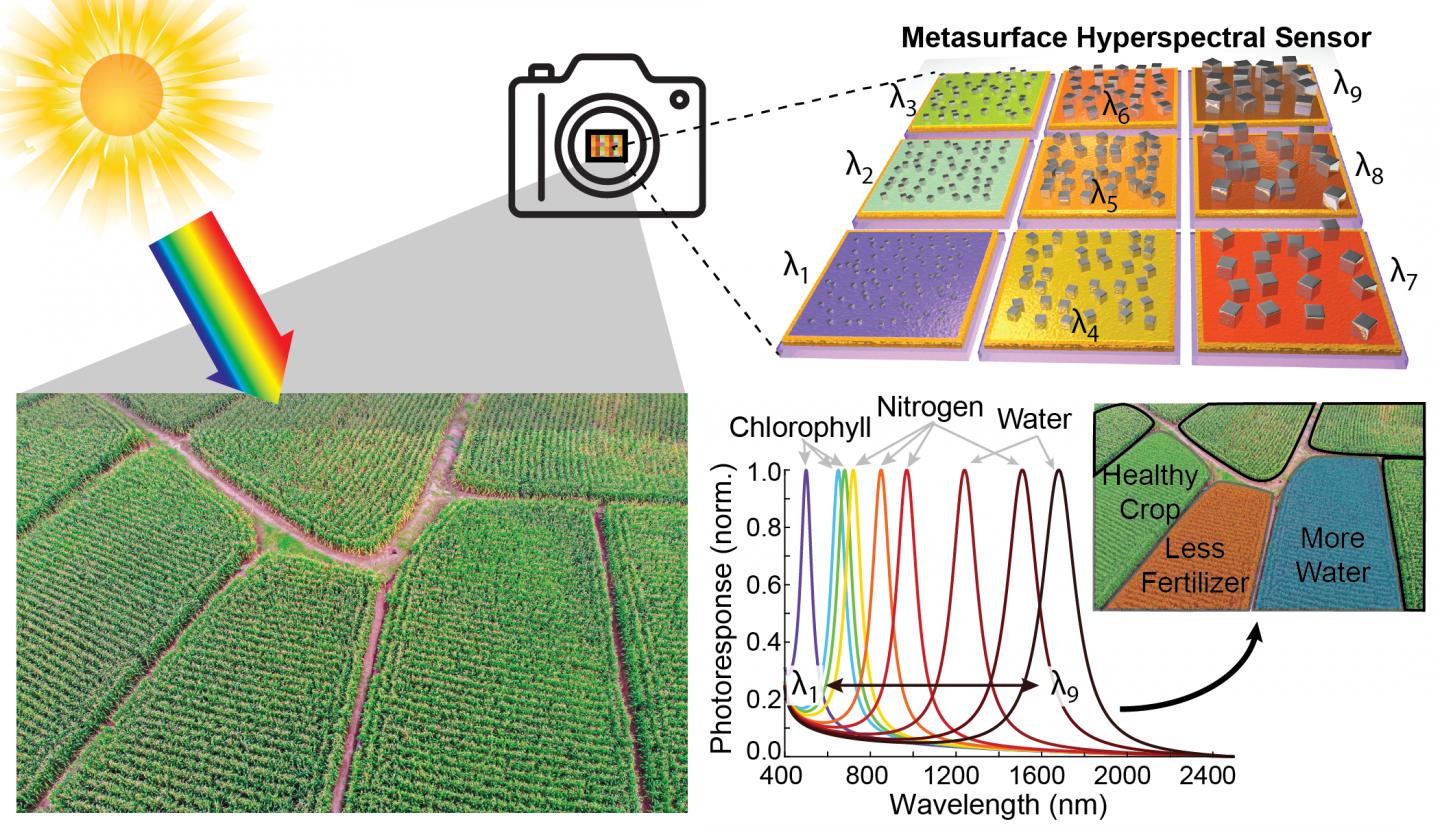 DURHAM, N.C. — Researchers at Duke University have demonstrated photodetectors that could span an unprecedented range of light frequencies by using on-chip spectral filters created by tailored electromagnetic materials. The combination of multiple photodetectors with different frequency responses on a single chip could enable lightweight, inexpensive multispectral cameras for applications such as cancer surgery, food safety inspection and precision agriculture.

A typical camera only captures visible light, which is a small fraction of the available spectrum. Other cameras might specialize in infrared or ultraviolet wavelengths, for example, but few can capture light from disparate points along the spectrum. And those that can suffer from a myriad of drawbacks, such as complicated and unreliable fabrication, slow functional speeds, bulkiness that can make them difficult to transport, and costs up to hundreds of thousands of dollars.

In research appearing online on November 25 in the journal Nature Materials, Duke researchers demonstrate a new type of broad-spectrum photodetector that can be implemented on a single chip, allowing it to capture a multispectral image in a few trillionths of a second and be produced for just tens of dollars. The technology is based on physics called plasmonics — the use of nanoscale physical phenomena to trap certain frequencies of light.

“The trapped light causes a sharp increase in temperature, which allows us to use these cool but almost forgotten about materials called pyroelectrics,” said Maiken Mikkelsen, the James N. and Elizabeth H. Barton Associate Professor of Electrical and Computer Engineering at Duke University. “But now that we’ve dusted them off and combined them with state of the art technology, we’ve been able to make these incredibly fast detectors that can also sense the frequency of the incoming light.”

According to Mikkelsen, commercial photodetectors have been made with these types of pyroelectric materials before, but have always suffered from two major drawbacks. They haven’t been able to focus on specific electromagnetic frequencies, and the thick layers of pyroelectric material needed to create enough of an electric signal have caused them to operate at very slow speeds.

“But our plasmonic detectors can be turned to any frequency and trap so much energy that they generate quite a lot of heat,” said Jon Stewart, a graduate student in Mikkelsen’s lab and first author on the paper. “That efficiency means we only need a thin layer of material, which greatly speeds up the process.”

The previous record for detection times in any type of thermal camera with an on-chip filter, whether it uses pyroelectric materials or not, was 337 microseconds. Mikkelsen’s plasmonics-based approach sparked a signal in just 700 picoseconds, which is roughly 500,000 times faster. But because those detection times were limited by the experimental instruments used to measure them, the new photodetectors might work even faster in the future.

To accomplish this, Mikkelsen and her team fashioned silver cubes just a hundred nanometers wide and placed them on a transparent film only a few nanometers above a thin layer of gold. When light strikes the surface of a nanocube, it excites the silver’s electrons, trapping the light’s energy — but only at a specific frequency.

The size of the silver nanocubes and their distance from the base layer of gold determine that frequency, while the amount of light absorbed can be tuned by controlling the spacing between the nanoparticles. By precisely tailoring these sizes and spacings, researchers can make the system respond to any electromagnetic frequency they want.

To harness this fundamental physical phenomenon for a commercial hyperspectral camera, researchers would need to fashion a grid of tiny, individual detectors, each tuned to a different frequency of light, into a larger ‘superpixel’.

In a step toward that end, the team demonstrates four individual photodetectors tailored to wavelengths between 750 and 1900 nanometers. The plasmonic metasurfaces absorb energy from specific frequencies of incoming light and heat up. The heat induces a change in the crystal structure of a thin layer of pyroelectric material called aluminium nitride sitting directly below them. That structural change creates a voltage, which is then read by a bottom layer of a silicon semiconductor contact that transmits the signal to a computer to analyze.

“It wasn’t obvious at all that we could do this,” said Mikkelsen. “It’s quite astonishing actually that not only do our photodetectors work, but we’re seeing new, unexpected physical phenomena that will allow us to speed up how fast we can do this detection by many orders of magnitude.”

Mikkelsen sees several potential uses for commercial cameras based on the technology, because the process required to manufacture these photodetectors is relatively fast, inexpensive and scalable.

Surgeons might use multispectral imaging to tell the difference between cancerous and healthy tissue during surgery. Food and water safety inspectors could use it to tell when a chicken breast is contaminated with dangerous bacteria.

With the support of a new Moore Inventor Fellowship from the Gordon and Betty Moore Foundation, Mikkelsen has set her sights on precision agriculture as a first target. While plants may only look green or brown to the naked eye, the light outside of the visible spectrum that is reflected from their leaves contains a cornucopia of valuable information.

“Obtaining a ‘spectral fingerprint’ can precisely identify a material and its composition,” said Mikkelsen. “Not only can it indicate the type of plant, but it can also determine its condition, whether it needs water, is stressed or has low nitrogen content, indicating a need for fertilizer. It is truly astonishing how much we can learn about plants by simply studying a spectral image of them.”

Hyperspectral imaging could enable precision agriculture by allowing fertilizer, pesticides, herbicides and water to be applied only where needed, saving water and money and reducing pollution. Imagine a hyperspectral camera mounted on a drone mapping a field’s condition and transmitting that information to a tractor designed to deliver fertilizer or pesticides at variable rates across the fields.

It is estimated that the process currently used to produce fertilizer accounts for up to two percent of the global energy consumption and up to three percent of global carbon dioxide emissions. At the same time, researchers estimate that 50 to 60 percent of fertilizer produced is wasted. Accounting for fertilizer alone, precision agriculture holds an enormous potential for energy savings and greenhouse gas reduction, not to mention the estimated $8.5 billion in direct cost savings each year, according to the United States Department of Agriculture.

Several companies are already pursuing these types of projects. For example, IBM is piloting a project in India using satellite imagery to assess crops in this manner. This approach, however, is very expensive and limiting, which is why Mikkelsen envisions a cheap, handheld detector that could image crop fields from the ground or from inexpensive drones.

“Imagine the impact not only in the United States, but also in low- and middle-income countries where there are often shortages of fertilizer and water,” said Mikkelsen. “By knowing where to apply those sparse resources, we could increase crop yield significantly and help reduce starvation.”

This research was supported by the Air Force Office of Scientific Research (FA9550-18-1-0326, FA9550-17-1-0002) and the National Defense Science & Engineering Graduate Fellowship Program.

Tip sheet: Recent research on how DNA is read and copied