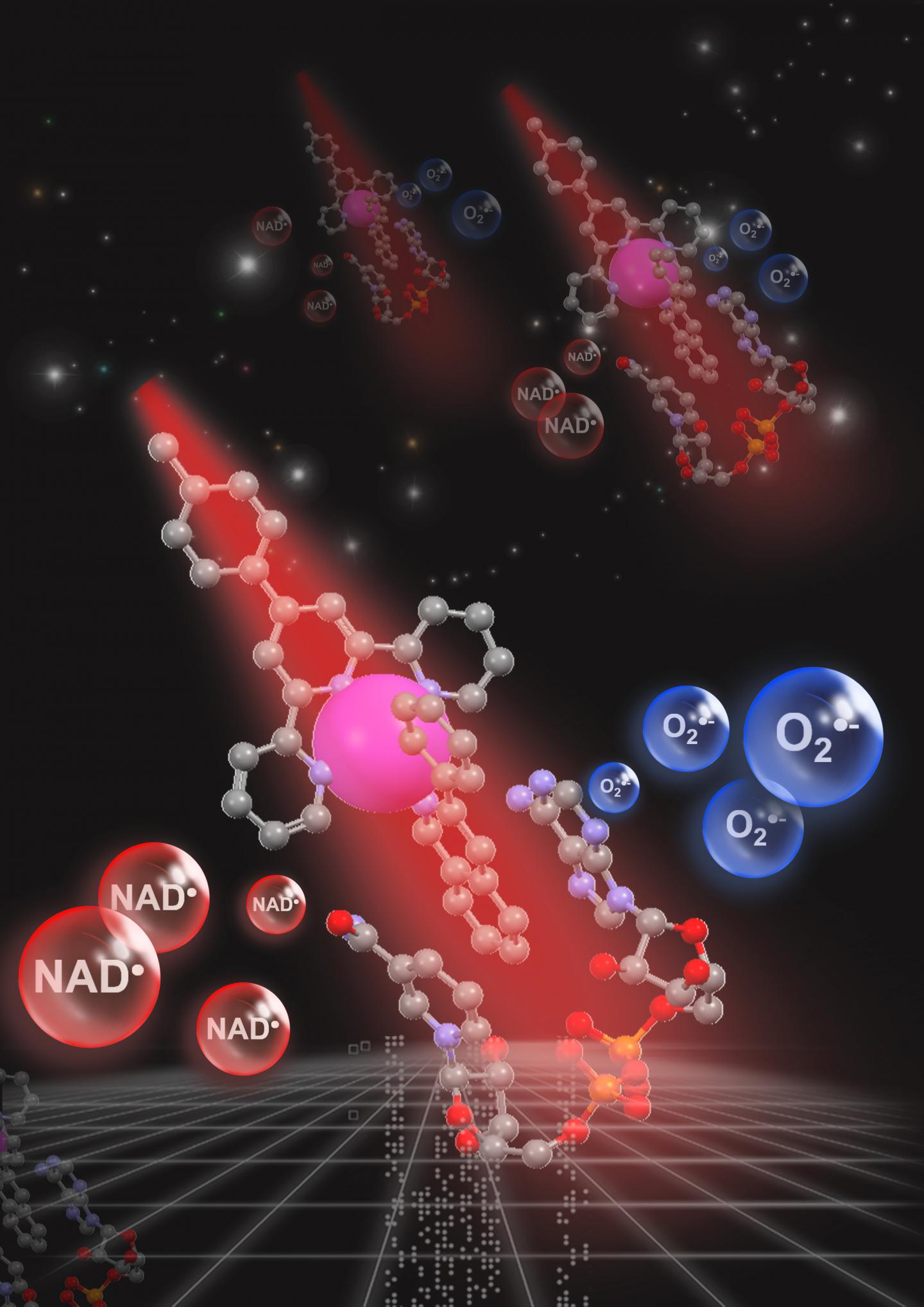 A space-age metal that formed part of the asteroid that destroyed the dinosaurs could provide a new method of treating cancer tumours selectively using light.

Scientists at the University of Warwick in collaboration with colleagues in China, France, Switzerland and Heriot-Watt University have developed a technique that uses light to activate a cancer-killing compound of Iridium that attacks, for the first time, a vital energy source in cancer cells even under hypoxia, significantly opening up the range of cancers that can be treated using the technique.

The technique is detailed in a paper published today (23 September 2019) in Nature Chemistry and could lead to another tool for clinicians to use in the fight against cancer, and potentially even vaccinate patients against future cancers.

Photodynamic therapy (PDT) uses light to kill cancer tumours in the body by activating a chemical compound called a photosensitiser, which creates species that can attack cancer cells in the presence of light. Using this method, clinicians can direct the light to specific regions of the cancer tumour and spare normal tissue from damage.

Current methods mainly rely on the presence of oxygen and many tumours are ‘hypoxic’, which means that they are deficient in normal oxygen often due to poor blood supplies. The international team of scientists have now developed a compound of the metal Iridium that will kill cancer cells in culture even when oxygen concentration is low.

The technique can treat any tumours where light can be administered, and would be particularly suited to treat bladder, lung, oesophageal, brain and skin cancers. There are around 10,000 bladder cancer cases in the UK per year, of which about 5,000 might potentially benefit from this kind of treatment.

Professor Peter Sadler from the University of Warwick’s Department of Chemistry said: “All the time in cancer treatment, clinicians are trying to fight resistance. Drugs can kill the cancer cells initially, but with repeated treatment the cells become resistant, they learn how to chemically modify the drug or counteract its mechanism of action. Researchers are looking for novel ways in which the cancer cell will die. If they have become resistant to other cancer drugs, they may not be resistant to this treatment because the way it kills the cancer cells is different.

“There is an increasing interest in reducing the side effects of cancer treatment as much as possible and anything that can be selective in what it targets will help with that. The compound that we have developed would not be very toxic at all, we would give it to the cancer cells, allow a little time for it to be taken up, then we would irradiate it with light and activate it in those cells. We would expect killing of those cancer cells to occur very quickly compared with current methods.”

Our bodies need coenzyme nicotinamide adenine dinucleotide (NADH) to generate energy. Cancer cells have a very high requirement for NADH, because they need a lot of energy to divide and multiple rapidly.

The researchers even found that the compound still works in the presence of oxygen, by converting it into a ‘toxic’ type of oxygen that will kill the cancer cells.

The team of scientists also noted that as the cancer cells die, they change their chemistry in such a way that they will generate an immune reaction in the body, what is known as an immunotherapeutic response. This suggests that those treated by this technique might be immunised against attack by that cancer, and will be investigated further in future research.

Professor Vas Stavros (University of Warwick) commented: “The power of light to change the reactivity of chemical molecules dramatically within a thousandth of a millionth of a second can now be harnessed to treat resistant cancers.”

Professor Martin Paterson (Heriot-Watt University) commented: “This breakthrough illustrates the power of modern computation to understand the effects of light on chemical molecules to provide drugs of the future with truly unique mechanisms of action.”

Professor Peter Sadler added: “The ability of metal compounds to induce an immunogenic response in the body that may effectively vaccinate a person against future attack by cancer is an exciting development. It is very speculative, but we are looking further into the hallmarks of that.

“Importantly we were fortunate to have had 3 highly talented young Royal Society Newton International Fellows in our team working on this challenging interdisciplinary project, who will undeniably contribute towards the future of this crucially important research.”

Iridium was first discovered in 1803, and its name comes from the Latin for ‘rainbow’. From the same family as platinum, it is hard, brittle, and is the world’s most corrosion-resistant metal. Yellow in colour, its melting point is more than 2400° Celsius. It is used in satellites and spacecraft due to its resistance to extreme environments, and is commonly believed to have been enriched in the earth’s crust by a meteorite that wiped out the dinosaurs 66 million years ago.

The research was supported by the Engineering and Physical Sciences Research Council (EPSRC), part of UK Research and Innovation.

A new way to turn heat into energy

Scienmag Nov 11, 2019
Credit: University of Illinois at Urbana-Champaign Department of Bioengineering Mammography is the current…

Wine regions could shrink dramatically with climate change unless…

Does greater immersion in virtual reality lead to a better experience?