Life of a pure Martian design 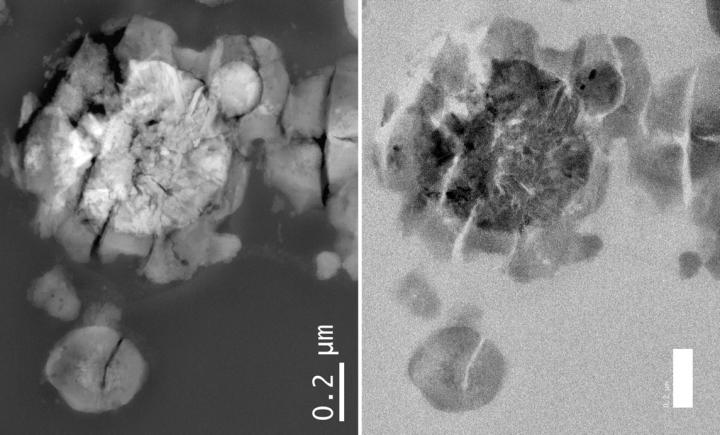 Early Mars is considered as an environment where life could possibly have existed. There was a time in the geological history of Mars when it could have been very similar to Earth and harbored life as we know it. In opposite to the current Mars conditions, bodies of liquid water, warmer temperature, and higher atmospheric pressure could have existed in Mars’ early history. Potential early forms of life on Mars should have been able to use accessible inventories of the red planet: derive energy from inorganic mineral sources and transform CO2 into biomass. Such living entities are rock-eating microorganisms, called “chemolithotrophs”, which are capable of transforming energy of stones to energy of life.

“We can assume that life forms similar to chemolithotrophs existed there in the early years of the red planet,” says astrobiologist Tetyana Milojevic, the head of Space Biochemistry group at the University of Vienna. The traces of this ancient life (biosignatures) could have been preserved within the Noachian terrains with moisture-rich ancient geological history and mineral springs that could have been colonized by chemolithotrophs. In order to properly assess Martian relevant biosignatures, it is crucially important to consider chemolithotrophs in Martian relevant mineralogical settings.

One of rare pieces of Mars’ rocks was recently crushed to envisage how life based on Martian materials may look like. The researches used the genuine Noachian Martian breccia Northwest Africa (NWA) 7034 (nicknamed “Black Beauty”) to grow the extreme thermoacidophile Metallosphaera sedula, an ancient inhabitant of terrestrial thermal springs. This brecciated regolith sample represents the oldest known Martian crust of the ancient crystallization ages (ca. 4.5 Ga).

A specimen of “Black Beauty”

“Black Beauty is among the rarest substances on Earth, it is a unique Martian breccia formed by various pieces of Martian crust (some of them are dated at 4.42 ± 0.07 billion years) and ejected millions years ago from the Martian surface. We had to choose a pretty bold approach of crushing few grams of precious Martian rock to recreate the possible look of Mars’ earliest and simplest life form,” says Tetyana Milojevic, corresponding author of the study, about the probe that was provided by colleagues from Colorado, USA.

As a result, the researchers observed how a dark fine-grained groundmass of Black Beauty was biotransformed and used in order to build up constitutive parts of microbial cells in form of biomineral deposits. Utilizing a comprehensive toolbox of cutting edge techniques in fruitful cooperation with the Austrian Center for Electron Microscopy and Nanoanalysis in Graz, the researchers explored unique microbial interactions with the genuine Noachian Martian breccia down to nanoscale and atomic resolution. M. sedula living on Martian crustal material produced distinct mineralogical and metabolic fingerprints, which can provide an opportunity to trace the putative bioalteration processes of the Martian crust.

“Grown on Martian crustal material, the microbe formed a robust mineral capsule comprised of complexed iron, manganese and aluminum phosphates. Apart from the massive encrustation of the cell surface, we have observed intracellular formation of crystalline deposits of a very complex nature (Fe, Mn oxides, mixed Mn silicates). These are distinguishable unique features of growth on the Noachian Martian breccia, which we did not observe previously when cultivating this microbe on terrestrial mineral sources and a stony chondritic meteorite”, says Milojevic, who recently received an ERC Consolidator Grant for her research further investigating biogenicity of Martian materials.

The observed multifaceted and complex biomineralization patterns of M. sedula grown on Black Beauty can be well stated by rich, diverse mineralogy and multimetallic nature of this ancient Martian meteorite. The unique biomineralization patterns of Black Beauty-grown cells of M. sedula emphasize the importance of experiments on genuine Martian materials for Mars-relevant astrobiological investigations. “Astrobiology research on Black Beauty and other similar ‘Flowers of the Universe’ can deliver priceless knowledge for the analysis of returned Mars samples in order to assess their potential biogenicity”, concludes Milojevic.