A comprehensive knowledge of human biomechanics is useful for training athletes more effectively. From a biomechanical perspective, sprinting is challenging in comparison to walking and endurance running, making it an intriguing area of research. In addition, a detailed biomechanical understanding of sprinter limbs can be insightful for more effective training of sprinters and for advancing our understanding of human motor performance in general. 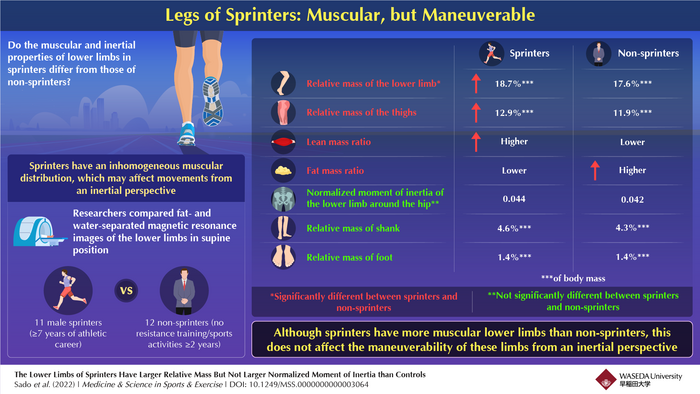 A comprehensive knowledge of human biomechanics is useful for training athletes more effectively. From a biomechanical perspective, sprinting is challenging in comparison to walking and endurance running, making it an intriguing area of research. In addition, a detailed biomechanical understanding of sprinter limbs can be insightful for more effective training of sprinters and for advancing our understanding of human motor performance in general.

Previous studies have revealed that sprinters have inhomogeneous muscular development, with well-developed hip flexors, extensors, and muscles located in the proximal thigh. The muscularity in sprinters corresponds well with the musculoskeletal demands for sprinting, which can be a positive aspect in force-related factors. At the same time, however, the morphological differences would involve differences in the mass distribution and, therefore, maneuverability. More muscular legs would lead to a larger mass and, in turn, to a general speculation of the trade-off between greater torque exertion ability and greater difficulty in moving the lower limb.

This raises an interesting question: How do sprinters balance muscular strength and brisk movements? Contextually, not much is known regarding the maneuverability of sprinter legs from an inertial viewpoint. This knowledge gap caught the attention of a research team led by Professor Yasuo Kawakami from the Faculty of Sport Sciences, Waseda University, who, along with his colleagues Hoshizora Ichinose from Nihon University and Dr. Natsuki Sado from University of Tsukuba, investigated athlete leg morphology from an inertial perspective.

“As former athletes, we have been interested in the relevance of the human body in sports. Athletes train hard, but in many cases, they do not know how their body responds specifically to training. We wanted to address this and help in the development of effective training strategies,” says Kawakami, explaining the motivation behind their study.

In their study, the researchers analyzed fat- and water-separated MRI scans of 11 male sprinters, all trained athletes with careers spanning more than 7 years, and 12 male non-sprinters, individuals who had not undergone resistance training or played sports within the previous two years at the time of the study. By comparing the MRI characteristics, they found that the sprinters had a higher relative mass of the lower limbs than did the non-sprinters. This increase in muscularity, in turn, aided power production during running. These findings have been published in Medicine & Science in Sports & Exercise. To understand the trade-off between joint torque and segment maneuverability, the researchers further computed the moment of inertia of the lower limbs around the hip. This comparison revealed that the moment of inertia did not differ between sprinters and non-sprinters, thereby suggesting that the increased musculature does not compromise the maneuverability of the lower limbs in sprinters.

On comparing the different parts of the lower limbs between sprinters and non-sprinters, the researchers found that while the relative mass of the thighs differed between sprinters and non-sprinters, the relative masses of the shank and foot did not vary. The researchers thus conclude that these top-heavy, bottom-light characteristics of sprinter limbs help them in executing athletic movements with ease, judging from an inertial perspective.

This novel study sheds light on the unique characteristics of the lower limbs of sprinters. The findings will be useful for the development of new training strategies. Based on their findings, what do the researchers suggest athletes and trainers do for more effective training? Kawakami comments, “Sprinters can focus on training their lower limb muscles without worrying about the increased mass associated with sprint-induced lower limb muscularity and the resulting difficulty of moving due to higher moment of inertia. This strategy will help in balancing running power and limb movements.”

Exciting developments await us in the field of sports science as we begin to understand the capabilities of athletes’ bodies more fully!

About Professor Yasuo Kawakami
Yasuo Kawakami is a professor at the Faculty of Sport Sciences at Waseda University, Japan. He holds a Ph.D. from the University of Tokyo, where he also served as an Associate Professor before joining Waseda University. His primary research area of interest is biodynamics (biomechanics and exercise physiology), and he specializes in the area of muscle mechanics. Specifically, he is investigating the in vivo skeletal muscle behavior during various human movements, and the effects of exercise training, growth, aging, and fatigue on the human musculoskeletal system. In a career spanning more than 30 years, he has over 200 papers to his credit. At Waseda University, he is also serving various administrative roles including the Vice President of the University.

About Waseda University
Located in the heart of Tokyo, Waseda University is a leading private research university that has long been dedicated to academic excellence, innovative research, and civic engagement at both the local and global levels since 1882. The University has produced many changemakers in its history, including nine prime ministers and many leaders in business, science and technology, literature, sports, and film. Waseda University has strong collaborations with overseas research institutions and is committed to advancing cutting-edge research and developing leaders who can contribute to the resolution of complex, global social issues. The University has set a target of achieving a zero-carbon campus by 2032, in line with the Sustainable Development Goals (SDGs) adopted by the United Nations in 2015.

There are no conflicts of interest to declare.