A study concludes that PCBs, PBDEs and metabolites of DDT threaten the terns throughout their lives, from the moment they hatch 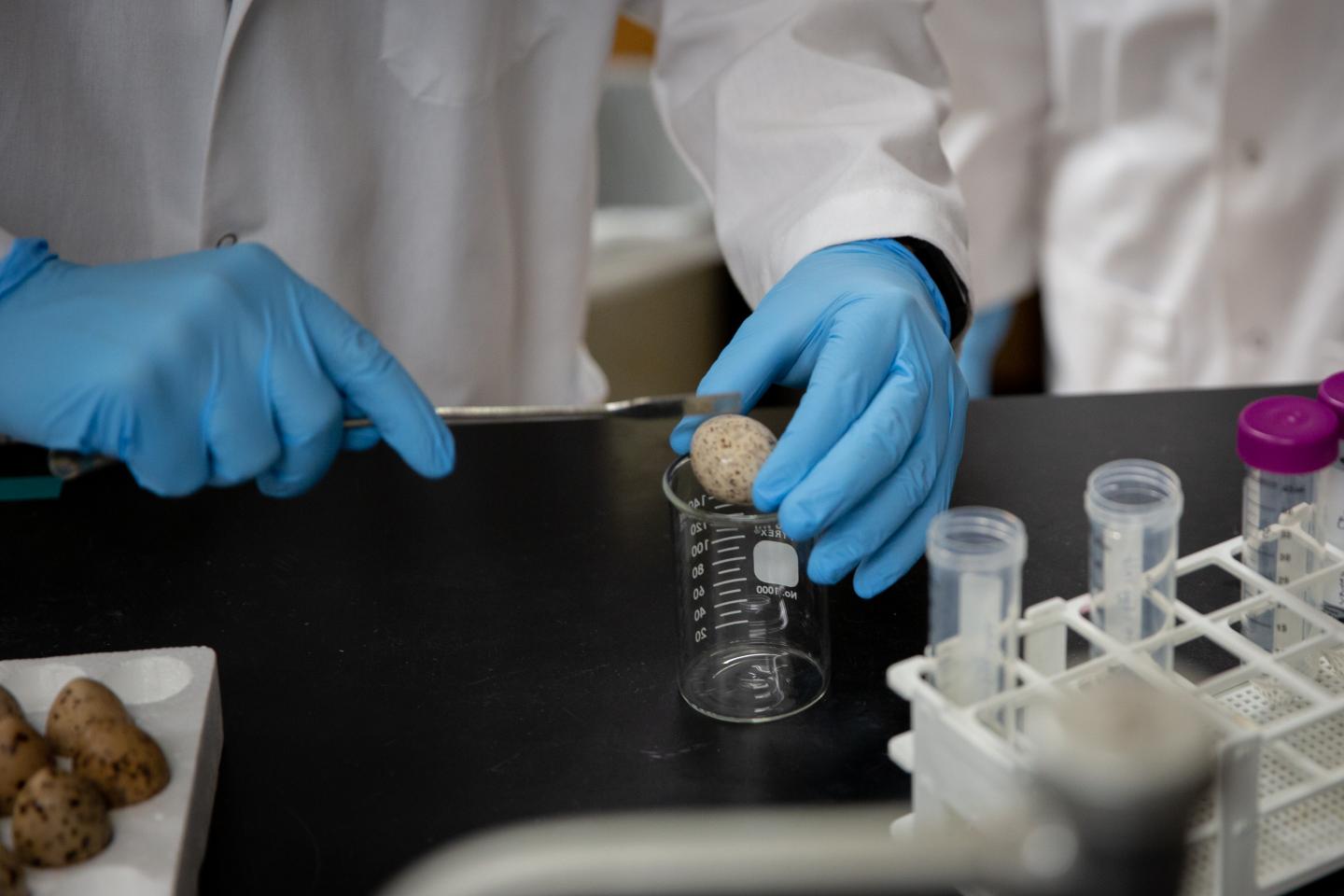 BUFFALO, N.Y. — Chemicals that haven’t been manufactured in the U.S. for years or even decades are still turning up in the bodies of migratory terns in the Great Lakes region, a new study finds.

Scientists discovered all three kinds of chemicals in the organs of over two dozen common terns in breeding grounds along the Niagara River and the shore of Lake Erie. The pollutants were found at various life stages, in chicks, in juveniles and in adults.

Researchers also detected the compounds in emerald shiners, a small fish that is the terns’ primary food source in the area.

The research was published online on Sept. 3 in Environment International, and will appear in the journal’s November issue. Authors included University at Buffalo chemists Diana Aga and Steven Travis, and SUNY Buffalo State biologist Alicia Pérez-Fuentetaja.

Sales of PBDEs, a class of flame retardants used in car seats, carpet padding, mattresses and many other household products, were phased out in the U.S. in 2013. Production of PCBs, once widely used as a coolant or insulating fluid in electrical transformers and capacitators, ended in the country in 1979. And use of DDT, an insecticide, has been prohibited in the U.S. for almost half a century, since 1972. The metabolite of DDT that the team found in the birds and fish is called dichlorodiphenyldichloroethylene (DDE).

“These chemicals are still there. They don’t just go away. With PCBs, for example, they haven’t been produced in the U.S. for a long time now, but you can still find them in the environment, in sediments and in water. They don’t degrade for many years. The fish eat organisms that accumulate them, and then the birds eat the fish,” says Aga, PhD, Henry M. Woodburn Professor of Chemistry in the University at Buffalo College of Arts and Sciences.

“The common tern is a threatened species in New York State, and their numbers have not increased much despite state efforts to provide nesting sites and surveillance. This study shows how wildlife is affected by human pollution of aquatic systems and how the chemicals we produce can have a multigenerational effect, being passed from mothers to chicks,” says Pérez-Fuentetaja, PhD, Professor of Biology at SUNY Buffalo State and Research Scientist at the Great Lakes Center at SUNY Buffalo State.

The levels of PCBs and PBDEs in the birds were high enough to potentially harm the birds’ health and affect population recovery, the authors write in their paper.

Pollutants impact terns in every stage of life

The findings illustrate how household and industrial chemicals have become ubiquitous in the environment, where they can endure for many years, posing risks to wildlife.

In the case of terns, the threat begins from the earliest moments of their lives, even before they hatch, says Travis, the paper’s first author, who successfully defended his PhD thesis at UB this fall.

He notes that the smallest chicks the team studied harbored higher concentrations of the chemicals than older birds and adults, indicating that the compounds are being passed from parent to progeny. To test this hypothesis, Travis has begun work on a study examining the levels of pollutants in the eggs of common terns and other wild aquatic birds.

“We see these really high concentrations in the smaller chicks, which indicates that there is maternal transfer of contaminants into the eggs,” he says.

“These substances interfere with the reproductive system and are endocrine disruptors,” Pérez-Fuentetaja says. “They tax the terns’ livers as they have to try and get rid of these pollutants, but the bioaccumulative nature of PCBs, PBDEs and DDEs means that the birds will not be able to fully detoxify themselves, and that they will pass part of their body-load to the next generation. These substances can alter development and neurological processes and could cause deformities, cancers and impaired behavior.”

The research highlights the risks associated with legacy contaminants, as well as the urgency of protecting the environment as new issues surrounding other classes of persistent chemicals, such as per- and polyfluoroalkyl substances (PFAS), emerge. Aga says that once persistent pollutants become pervasive in water and soil, it’s very difficult to get rid of them.

The new study shows how long-banned chemicals continue to jeopardize the health of Great Lakes ecosystems.

He adds, however, that, “One positive outcome of the study is that we only see the metabolite of DDT, called ‘DDE,’ in the fish. This likely indicates that there aren’t new sources of DDT being introduced to Lake Erie and the Niagara River, and that the DDT that was there is breaking down.”

The New York State Department of Environmental Conservation supported the research through collection of tern samples, which consisted of common terns that died through natural causes. The SUNY Buffalo State Great Lakes Center supported the study through collection of emerald shiners and other contributions. Additional support came from the UB Mark Diamond Research Fund and Greenway Ecological Standing Committee.