FRANKFURT. Over 450 prehistoric pots were examined, 66 of them contained traces of lipids, that is, substances insoluble in water. On behalf of the Nok research team at Goethe University, chemists from the University of Bristol extracted lipid profiles, with the aim of revealing which plants had been used. The results have now been published in “Archaeological and Anthropological Sciences”: over a third of the 66 lipid profiles displayed very distinctive and complex distributions – indicating that different plant species and parts had been processed. 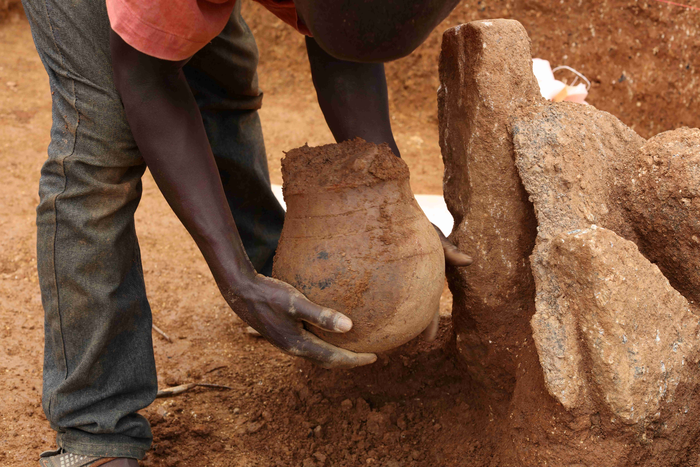 FRANKFURT. Over 450 prehistoric pots were examined, 66 of them contained traces of lipids, that is, substances insoluble in water. On behalf of the Nok research team at Goethe University, chemists from the University of Bristol extracted lipid profiles, with the aim of revealing which plants had been used. The results have now been published in “Archaeological and Anthropological Sciences”: over a third of the 66 lipid profiles displayed very distinctive and complex distributions – indicating that different plant species and parts had been processed.

Today, leafy vegetables, for example the cooked leaves of trees such as the baobab (Adansonia digitata) or of the shrubby – nomen est omen – bitter leaf (Vernonia amygdalina), accompany many West African dishes. These leafy sauces are enhanced with spices and vegetables as well as fish or meat, and complement the starchy staples of the main dish, such as pounded yam in the southern part of West Africa or thick porridge made from pearl millet in the drier savannahs in the north. By combining their expertise, archaeology and archaeobotany researchers at Goethe University and chemical scientists from the University of Bristol have corroborated that the origins of such West African dishes date back 3,500 years.

The studies are part of a project funded by the German Research Foundation, which was headed by Professor Peter Breunig and Professor Katharina Neumann and ended in December 2021. For over twelve years, archaeologists and archaeobotanists from Goethe University studied the Nok culture of Central Nigeria, which is known for its large terracotta figures and early iron production in West Africa in the first millennium BC – although the roots of the Nok culture in fact stretch back to the middle of the second millennium. Research focused above all on the social context in which the sculptures were created, that is, including eating habits and economy. Using carbonised plant remains from Central Nigeria, it was possible to prove that the Nok people grew pearl millet. But whether they also used starchy plants, such as yam, and which dishes they prepared from the pearl millet had so far been a mystery.

“Carbonised plant remains such as seeds and nutshells preserved in archaeological sediments reflect only part of what people ate back then,” explains Professor Katharina Neumann. They hoped, she says, that the chemical analyses would deliver additional insights into food preparation. And indeed, with the help of lipid biomarkers and analyses of stable isotopes, the researchers from Bristol were able to show, by examining over 450 prehistoric pots, that the Nok people included different plant species in their diet.

Dr Julie Dunne from the University of Bristol’s Organic Geochemistry Unit says: “These unusual and highly complex plant lipid profiles are the most varied seen (globally) in archaeological pottery to date.” There appear to be at least seven different lipid profiles in the vessels, which clearly indicates the processing of various plant species and plant organs in these vessels, possibly including underground storage organs (tubers) such as yam.

Since the beginning of the project, the archaeobotanists have sought evidence for the early use of yam. After all, the Nok region is situated in the “yam belt” of West Africa, that is, the area of the continent in which yam is nowadays grown. Carbonised remains are of no further help here because the soft flesh of the tubers is often poorly preserved and mostly non-specific as well. The chemical analyses indicate that – apart from leaves and other as yet unidentified vegetables – the Nok people also cooked plant tissue containing suberin. This substance is found in the periderm of both overground and underground plant organs – possibly a first indication that yam was used, if not the unequivocal proof hoped for.

Through the archaeobotanical study of carbonised remains, pearl millet (Cenchrus americanus) and cowpea (Vigna unguiculata), the oily fruits of the African elemi (Canarium schweinfurthii) and a fruit known as African peach (Nauclea latifolia), which due to its high number of seeds is reminiscent of a large fig, were already known. Molecular analysis now rounds off the picture of food preparation at the sites of the Nok culture. Archaeobotanist Dr Alexa Höhn from Goethe University explains: “The visible and invisible remains of food preparation in the archaeological sediment and the pottery give us a much more complete picture of past eating habits. This new evidence suggests a significant time depth in West African cuisine.”

Caption: Excavation of a Nok vessel at the Ifana 3 site. (Photo: Peter Breunig)

Making the invisible visible: tracing the origins of plants in West African cuisine through archaeobotanical and organic residue analysis.