New research analyzing pieces of the most ancient rocks on the planet adds some of the sharpest evidence yet that Earth’s crust was pushing and pulling in a manner similar to modern plate tectonics at least 3.25 billion years ago. The study also provides the earliest proof of when the planet’s magnetic north and south poles swapped places. 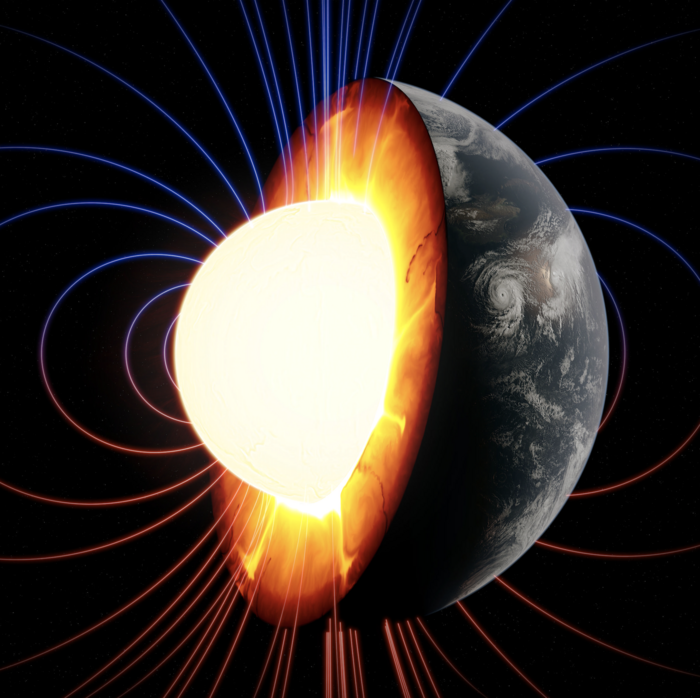 New research analyzing pieces of the most ancient rocks on the planet adds some of the sharpest evidence yet that Earth’s crust was pushing and pulling in a manner similar to modern plate tectonics at least 3.25 billion years ago. The study also provides the earliest proof of when the planet’s magnetic north and south poles swapped places.

The two results offer clues into how such geological changes may have resulted in an environment more conducive to the development of life on the planet.

The work, described in PNAS and led by Harvard geologists Alec Brenner and Roger Fu, focused on a portion of the Pilbara Craton in western Australia, one of the oldest and most stable pieces of the Earth’s crust. Using novel techniques and equipment, the researchers show that some of the Earth’s earliest surface was moving at a rate of 6.1 centimeters per year and 0.55 degrees every million years.

That speed more than doubles the rate the ancient crust was shown to be moving in a previous study by the same researchers. Both the speed and direction of this latitudinal drift leaves plate tectonics as the most logical and strongest explanations for it.

“There’s a lot of work that seems to suggest that early in Earth’s history plate tectonics wasn’t actually the dominant way in which the planet’s internal heat gets released as it is today through the shifting of plates,” said Brenner, a Ph.D. candidate in the Graduate School of Arts and Sciences and member of Harvard’s Paleomagnetics Lab. “This evidence lets us much more confidently rule out explanations that don’t involve plate tectonics.”

For example, the researchers can now argue against phenomena called “true polar wander” and “stagnant lid tectonics,” which can both cause the Earth’s surface to shift but aren’t part of modern-style plate tectonics. The results lean more toward plate tectonic motion because the newly discovered higher rate of speed is inconsistent with aspects of the other two processes.

In the paper, the scientists also describe what’s believed to be the oldest evidence of when Earth reversed its geomagnetic fields, meaning the magnetic North and South Pole flipped locations. This type of flip-flop is a common occurrence in Earth’s geologic history with the pole’s reversing 183 times in the last 83 million years and perhaps several hundred times in the past 160 million years, according to NASA.

The reversal tells a great deal about the planet’s magnetic field 3.2 billion years ago. Key among these implications is that the magnetic field was likely stable and strong enough to keep solar winds from eroding the atmosphere. This insight, combined with the results on plate tectonics, offers clues to the conditions under which the earliest forms of life developed.

“It paints this picture of an early earth that was already really geodynamically mature,” Brenner said. “It had a lot of the same sorts of dynamic processes that result in an Earth that has essentially more stable environmental and surface conditions, making it more feasible for life to evolve and develop.”

Today, the Earth’s outer shell consists of about 15 shifting blocks of crust, or plates, which hold the planet’s continents and oceans. Over eons the plates drifted into each other and apart, forming new continents and mountains and exposing new rocks to the atmosphere, which led to chemical reactions that stabilized Earth’s surface temperature over billions of years.

Evidence of when plate tectonics started is hard to come by because the oldest pieces of crust are thrust into the interior mantle, never to resurface. Only 5 percent of all rocks on Earth are older than 2.5 billion years old, and no rock is older than about 4 billion years.

Overall, the study adds to growing research that tectonic movement occurred relatively early in Earth’s 4.5-billion-year history and that early forms of life came about in a more moderate environment. Members of the project revisited the Pilbara Craton in 2018, which stretches about 300 miles across. They drilled into the primordial and thick slab of crust there to collect samples that, back in Cambridge, were analyzed for their magnetic history.

Using magnetometers, demagnetizing equipment, and the Quantum Diamond Microscope — which images the magnetic fields of a sample and precisely identifies the nature of the magnetized particles — the researchers created a suite of new techniques for determining the age and way the samples became magnetized. This allows the researchers to determine how, when, and which direction the crust shifted as well as the magnetic influence coming from Earth’s geomagnetic poles.

The Quantum Diamond Microscope was developed in a collaboration between Harvard researchers in the Departments of Earth and Planetary Sciences (EPS) and of Physics.

For future studies, Fu and Brenner plan keep their focus on the Pilbara Craton while also looking beyond it to other ancient crusts around the world. They hope to find older evidence of modern-like plate motion and when the Earth’s magnetic poles flipped.

“Finally being able to reliably read these very ancient rocks opens up so many possibilities for observing a time period that often is known more through theory than solid data,” said Fu, professor of EPS in the Faculty of Arts and Sciences. “Ultimately, we have a good shot at reconstructing not just when tectonic plates started moving, but also how their motions — and therefore the deep-seated Earth interior processes that drive them — have changed through time.”

Plate motion and a dipolar geomagnetic field at 3.25 Ga