A new scientific study shows that all previously proposed body forms of the gigantic Megalodon, or megatooth shark, which lived nearly worldwide roughly 15-3.6 million years ago, remain in the realm of speculations. 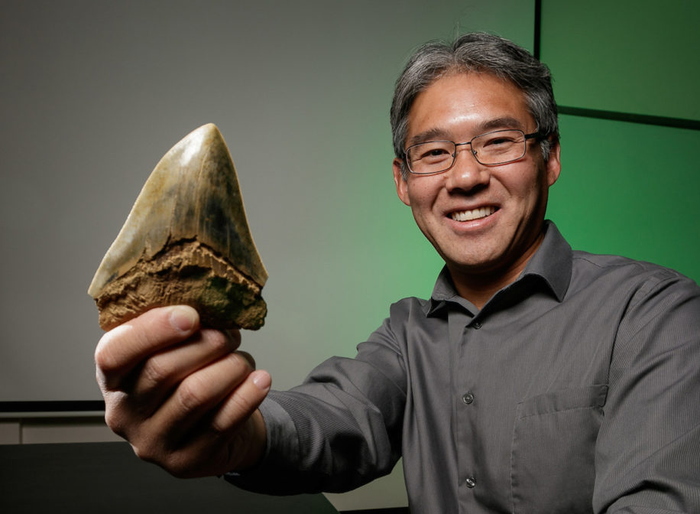 A new scientific study shows that all previously proposed body forms of the gigantic Megalodon, or megatooth shark, which lived nearly worldwide roughly 15-3.6 million years ago, remain in the realm of speculations.

“The study may appear to be a step backward in science, but the continued mystery makes paleontology, the study of prehistoric life, a fascinating and exciting scientific field,” said Kenshu Shimada, DePaul University paleobiology professor and a coauthor of the study. This latest research shedding light on the reality about the current understanding of the body shape of the Megalodon (formally called Otodus megalodon) appears in the international journal Historical Biology.

Otodus megalodon is typically portrayed as a super-sized, monstrous shark in novels and films such as the 2018 sci-fi film “The Meg.” Previous studies suggest that the shark likely reached lengths of at least 50 feet (15 meters) and possibly as much as 65 feet (20 meters).

“This new study shows that there are currently no scientific means to support or refute the accuracy of any of the previously published body forms of O. megalodon,” noted lead author Phillip Sternes, who graduated from DePaul in 2019 and is currently a Ph.D. candidate at the University of California, Riverside. Shimada mentored Sternes in his DePaul lab in Chicago, and the new study additionally includes Shimada’s current graduate student, Jake Wood, as coauthor.

Otodus megalodon is known only from its teeth and vertebrae in the fossil record, and traditionally the modern great white shark (Carcharodon carcharias) was used as a model for the body form of O. megalodon. Carcharodon carcharias belongs to the shark family Lamnidae, or lamnids, also including the mako, porbeagle, and salmon sharks, and they are regionally endothermic (partially warm-blooded), allowing them to be active predators. Otodus megalodon is not a lamnid shark, but it was previously inferred to also have been regionally endothermic. Based on the inference, yet another previous study used two-dimensional geometric shape analyses on the body forms of modern lamnids to propose an inferred body form of O. megalodon.

The new study by Sternes, Wood and Shimada examined whether such a two-dimensional approach can actually differentiate the body forms represented by modern endothermic (warm-blooded) species from those of modern ectothermic (cold-blooded) ones within the shark order called Lamniformes, which also includes Otodus megalodon. The study strongly indicates that, two-dimensionally, there is no relationship between thermophysiology and body form in lamniforms. “Although it is still possible that O. megalodon could have resembled the modern great white shark or lamnids, our results suggest that the two-dimensional approach does not necessarily decisively allow the body form reconstruction for O. megalodon,” Wood said.

“All previously proposed body forms of Otodus megalodon should be regarded as speculations from the scientific standpoint,” Sternes said. “Any meaningful discussion about the body form of O. megalodon would require the discovery of at least one complete, or nearly complete, skeleton of the species in the fossil record,” added Wood. “The fact that we still don’t know exactly how O. megalodon looked keeps our imagination going,” Shimada said. “This is exactly why the science of paleontology continues to be an exciting academic field. We’ll continue looking for more clues in the fossil record.”

Body forms of extant lamniform sharks (Elasmobranchii: Lamniformes), and comments on the morphology of the extinct megatooth shark, Otodus megalodon, and the evolution of lamniform thermophysiology