Psychedelics are now a rapidly growing area of neuroscience and clinical research, one that may produce much-needed new therapies for disorders such as depression and schizophrenia. Yet there is still a lot to know about how these drug agents alter states of consciousness. 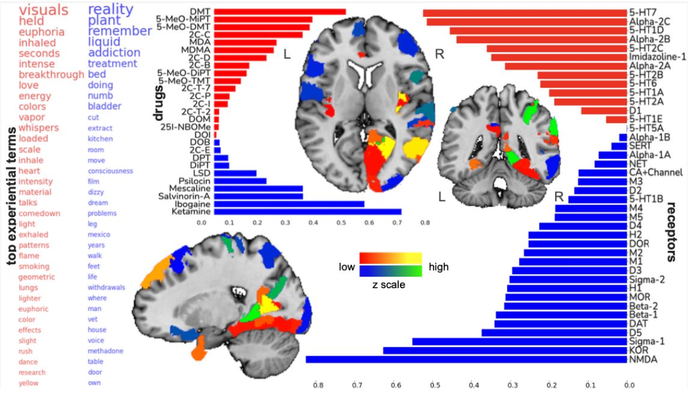 Psychedelics are now a rapidly growing area of neuroscience and clinical research, one that may produce much-needed new therapies for disorders such as depression and schizophrenia. Yet there is still a lot to know about how these drug agents alter states of consciousness.

In the world’s largest study on psychedelics and the brain, a team of researchers from The Neuro (Montreal Neurological Institute-Hospital) and Department of Biomedical Engineering of McGill University, the Broad Institute at Harvard/MIT, SUNY Downstate Health Sciences University, and Mila – Quebec Artificial Intelligence Institute have shown how drug-induced changes in subjective awareness are anatomically rooted in specific neurotransmitter receptor systems.

The researchers gathered 6,850 testimonials from people who took a range of 27 different psychedelic drugs. In a first-of-its-kind approach, they designed a machine learning strategy to extract commonly used words from the testimonials and link them with the neurotransmitter receptors that likely induced them. The interdisciplinary team could then associate the subjective experiences with brain regions where the receptor combinations are most commonly found—these turned out to be the lowest and some of the deepest layers of the brain’s information processing layers.

Using thousands of gene transcription probes, the team created a 3D map of the brain receptors and the subjective experiences linked to them, across the whole brain. While psychedelic experience is known to vary widely from person to person, the large testimonial dataset allowed the team to characterize coherent states of conscious experiences with receptors and brain regions across individuals. This supports the theory that new hallucinogenic drug compounds can be designed to reliably create desired mental states.

For example, a promising effect of some psychedelics for psychiatric intervention is ego-dissolution—the feeling of being detached with the self. The study found that this feeling was most associated with the receptor serotonin 5-HT2A. However, other serotonin receptors (5-HT2C, 5-HT1A, 5-HT2B), adrenergic receptors Alpha-2A and Beta-2, as well as the D2 receptor were also linked with the feeling of ego-dissolution. A drug targeting these receptors may be able to reliably create this feeling in patients whom clinicians believe might benefit from it.

“Hallucinogenic drugs may very well turn out to be the next big thing to improve clinical care of major mental health conditions,” says Professor Danilo Bzdok, the study’s lead author “Our study provides a first step, a proof of principle that we may be able to build machine learning systems in the future that can accurately predict which neurotransmitter receptor combinations need to be stimulated to induce a specific state of conscious experience in a given person.”

This study, published in the journal Science Advances on March 16, 2022, was funded with the help of the Brain Canada Foundation, through the Canada Brain Research Fund, as well as by NIH grant R01AG068563A and the Canadian Institutes of Health Research. Danilo Bzdok was also supported by the Healthy Brains Healthy Lives initiative (Canada First Research Excellence fund), and by the CIFAR Artificial Intelligence Chairs program (Canada Institute for Advanced Research), as well as Google.

The Neuro – The Montreal Neurological Institute-Hospital – is a bilingual, world-leading destination for brain research and advanced patient care. Since its founding in 1934 by renowned neurosurgeon Dr. Wilder Penfield, The Neuro has grown to be the largest specialized neuroscience research and clinical center in Canada, and one of the largest in the world. The seamless integration of research, patient care, and training of the world’s top minds make The Neuro uniquely positioned to have a significant impact on the understanding and treatment of nervous system disorders. In 2016, The Neuro became the first institute in the world to fully embrace the Open Science philosophy, creating the Tanenbaum Open Science Institute. The Montreal Neurological Institute is a McGill University research and teaching institute. The Montreal Neurological Hospital is part of the Neuroscience Mission of the McGill University Health Centre. For more information, please visit www.theneuro.ca