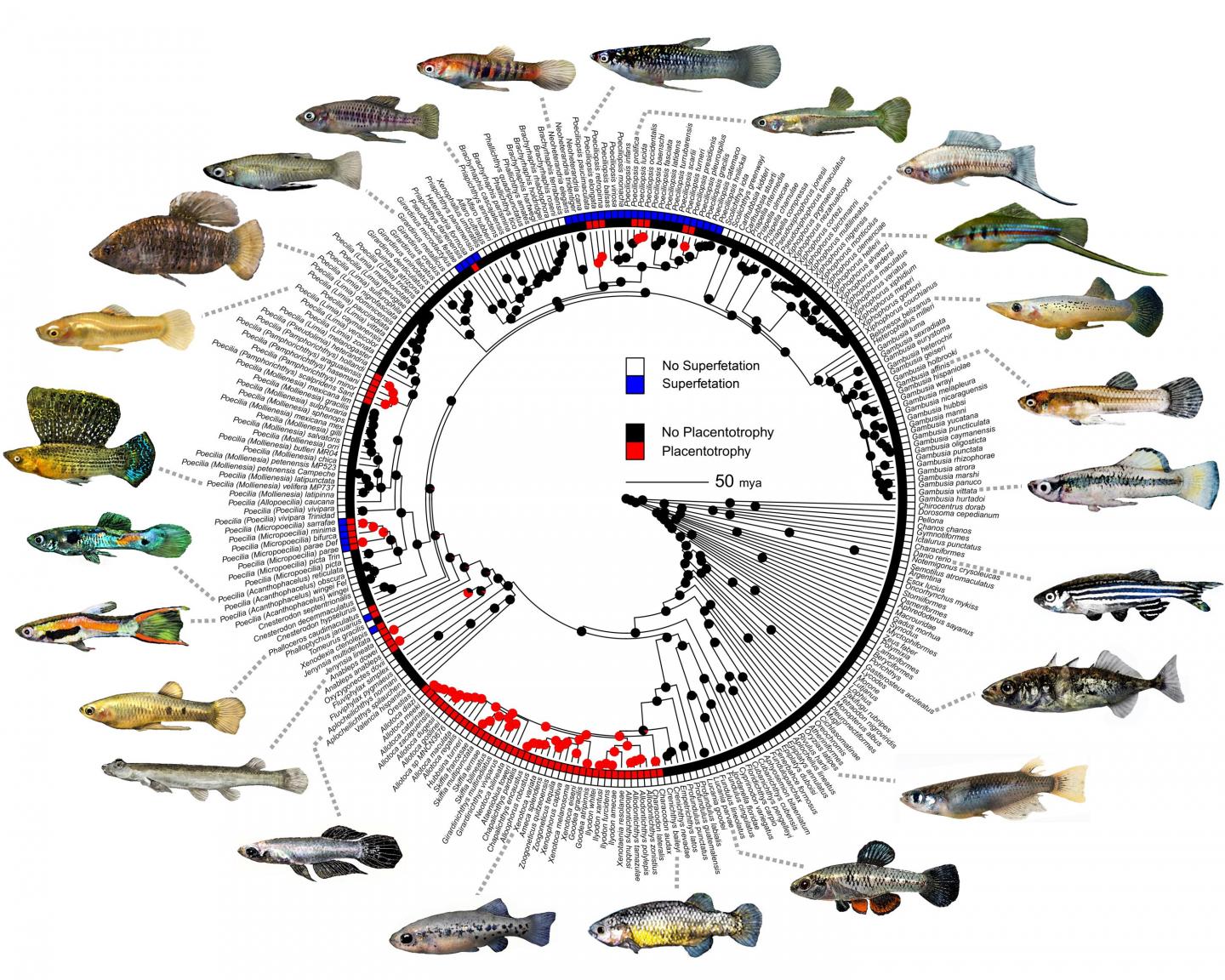 Research led by David Reznick, a UC Riverside biology professor, used fish often seen in pet stores, like guppies and swordtails, to test a hypothesis proposed by David and Jean Zeh at the University of Nevada, Reno. They predicted that the way mothers nurture their young influences the evolution of male traits, and Reznick’s team is the first to find that the prediction was correct.

A paper describing the research was published online today in Nature Communications.

Reznick was inspired to test the hypothesis while wandering the aisles of a pet store. Having spent more than a decade studying fish in the guppy family, he knew the ones in the store had a few things in common.

“The fish I saw that day all belong to the Poeciliidae family, which give birth to live young, rather than lay eggs. Some of them even have placentas, like mammals,” Reznick said. “The ones offered for sale were only species with colorful males and all of those species had mothers that lack placentas. I wanted to know how having this type of mother might relate to the evolution of male traits.”

For the fish without placentas, choosing a mate can be higher stakes.

“When mothers lack a placenta, they’ve already invested all they’ve got to give into the eggs prior to fertilization,” Reznick said. “So, the mothers are picky about the males they choose.”

In fish where the mothers do have a placenta, it’s a different game. In these species the eggs are smaller, and the mother hasn’t invested a lot in them yet. A mother with a placenta has the ability to choose the father after mating, by influencing which sperm fertilize the eggs or possibly by aborting eggs she doesn’t want.

Analyzing the DNA tree of the fish family, the team found that the branches of the family tree with mothers who lack placentas are also those that give rise to the flashier males.

The team then investigated a second prediction by David and Jean Zeh: that animals with placentas would diverge faster from one species into two. Here, Reznick’s team proved this prediction wrong.

Fish species with fancy males formed new species twice as fast as those with plain males. What this means is that in these fish, there is a connection between the way mothers nurture offspring, how they choose mates, and how fast their kind is destined to multiply into a new species.

Members of the international research team included Andrew Furness of the University of Hull in the U.K., Bart Pollux of Wageningen University in the Netherlands, Robert Meredith of Montclair State University in New Jersey, as well as UC Riverside’s Mark Springer.

Though this analysis was performed using fish, Reznick says the underlying principles are broadly applicable throughout the animal kingdom. Many animals have evolved the ability to produce live young and many of these have evolved something like a placenta. He expects that the same connections between evolution of male and female traits and speciation rate are waiting to be discovered.

“I wasn’t expecting to learn what we did about these connections between mothering and evolution, but I’m so pleased to have provided here a better understanding of how and why organisms evolve the way they do and how that evolution can affect the formation of new species,” Reznick said.

Teens at greater risk of violence, injury during sexual assaults than…