Changes observed in the neural responses to electric stimulation in retinitis pigmentosa animal model. Findings to be used to suggest guidelines for patient selection of retinal prostheses for better performance. 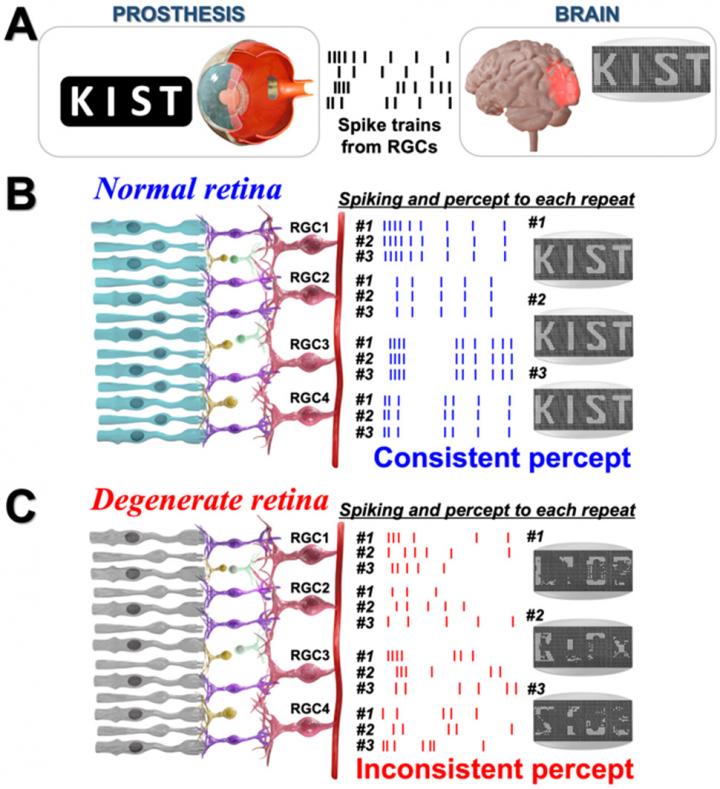 A Korean research team has reported important findings that could potentially improve the performance of retinal prostheses creating artificial vision for blind individuals. The Korea Institute of Science and Technology (KIST) announced that a research team led by Dr. Maesoon Im of the Center for BioMicrosystems, Brain Science Institute had found retinal neural signals arising from electric stimulation are altered depending on disease progression in mice affected by outer retinal degeneration. This research was done in collaboration with the lab of Professor Shelley Fried at Harvard Medical School, Massachusetts General Hospital.

Retinal degenerative diseases, such as retinitis pigmentosa and age-related macular degeneration, primarily destroy photoreceptor cells, which convert light into electrochemical signals, leading to profound vision loss. Currently, there are no available cure for these diseases.

Fortunately, retinal ganglion cells are known to survive those conditions, making “artificial vision” available. An array of microelectrodes can be implanted at the back of the eyeball so that electric pulses applied by those microelectrodes can stimulate ganglion cells to transmit visual neural signals to the brain again. This is the basic working principle of retinal prosthetic devices. Although several retinal prostheses have been commercialized, one of problems preventing broad application has been a huge performance variation across patients due to unidentified reason.

The KIST research team had delved into the potential source of the performance variation and has found the level of disease progression may be critical. They designed a longitudinal study and performed experiments using mice at various stages of retinal degeneration. Those mice lost their vision gradually due to a genetic mutation which is similar to people with retinitis pigmentosa . The researchers recorded electrically-evoked neural activities of retinal ganglion cells from animals at varying ages and tried to correlate those artificial vision signals to the disease progression. They uncovered that both the magnitude and the consistency of the electrically-evoked responses diminished as retinal degeneration advanced.

Dr. Young-Jun Yoon and Dr. Jae-Ik Lee, the lead authors of the study, said, “Even if a user fixes his/her gaze, their degenerate retina is likely to keep transmitting considerably different neural signals to the brain across repeats of electric stimuli. Probably, it may have caused poor perception of electrically-evoked artificial vision.”

“Retinal degenerative diseases exhibit different patterns of progression across patients. Our results suggest that it is crucial to carefully select candidate patients of retinal implants by thorough examinations assesing the progression level of each patient’s retinal degeneration,” said Dr. Maesoon Im. “We are studying hardware and software approaches for the improved quality of artificial vision for patients at the late-stage degeneration.”

This research was supported in part by the Institutional Research Program of the Korea Institute of Science and Technology (KIST) and in part by the New Researcher Support Program of the National Research Foundation of Korea, both funded by the Ministry of Science and ICT (MSIT). This research was also supported by the VA Boston Healthcare System, the National Eye Institute, and the National Institute of Neurological Disorders and Stroke. The journal article of this study has recently been published online as an Early Access at the IEEE Transactions on Neural Systems and Rehabilitation Engineering.