Researchers at The Ottawa Hospital and the University of Ottawa have discovered that a kind of kiss between cells, called trogocytosis, plays a key role in the battle between the immune system and blood cancer cells. 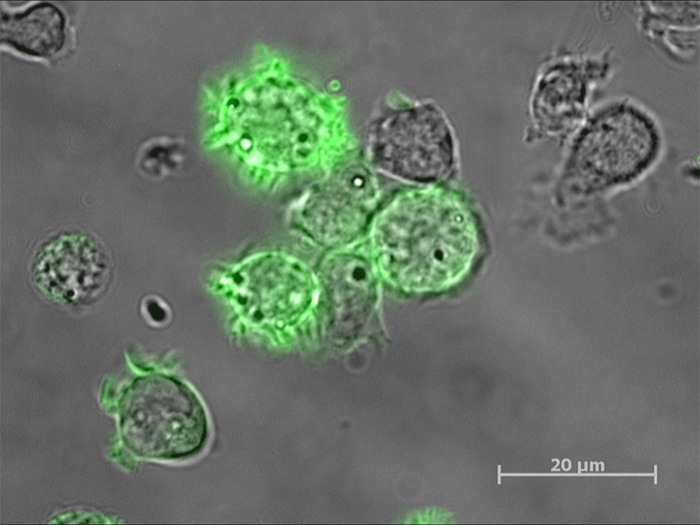 Researchers at The Ottawa Hospital and the University of Ottawa have discovered that a kind of kiss between cells, called trogocytosis, plays a key role in the battle between the immune system and blood cancer cells.

Trogocytosis is a phenomenon by which immune cells, such as Natural Killer (NK) cells, make close contact with another cell and steal a chunk of its membrane. Dr. Michele Ardolino and his team discovered that when NK cells steal membranes from blood cancer cells, a protein called PD-1 comes along for the ride and puts the NK cell to sleep, shutting down their anti-cancer activity.

“NK cells are exceptional cancer killers, and we previously discovered that PD-1 prevents them from working properly,” said Dr. Ardolino, senior scientist at The Ottawa Hospital and assistant professor at the University of Ottawa. “A missing piece of the puzzle is how NK cells produce PD-1, which was surprisingly hard to address. Now we understand why: NK cells do not make their own PD-1, but they steal it from cancer cells! We don’t know exactly why NK cells steal membranes from cancer cells, but it seems clear that tumors hijack the process to put NK cells to sleep and evade the immune system.”

Fortunately, drugs that block PD-1, also called PD-1 inhibitors or immune checkpoint inhibitors, are now routinely used to “wake up” the immune system and help it fight cancer cells. These drugs have significantly improved survival for people with certain kinds of skin cancer, blood cancer and lung cancer, among others.

PD-1 inhibitors were originally developed to wake up the immune system’s T cells. Dr. Ardolino’s research, published in Science Advances, solves a mystery about how PD-1 inhibitors work on NK cells. A better understanding of how these drugs work on different kinds of immune cells could lead to new kinds of immunotherapy for cancer.

Dr. Ardolino notes that this research was possible because of a large team of trainees, postdoctoral fellows and staff.

“There is a great sense of collaboration in research at The Ottawa Hospital and this was instrumental for the success of this project,” said Dr. Ardolino. “We are very lucky to collaborate with physicians invested in performing research to advance patients treatment, such as Dr. Arleigh McCurdy, as well as basic scientists in the Cancer Therapeutic Program, such as Dr. Doug Gray who is a microscopy wiz!”